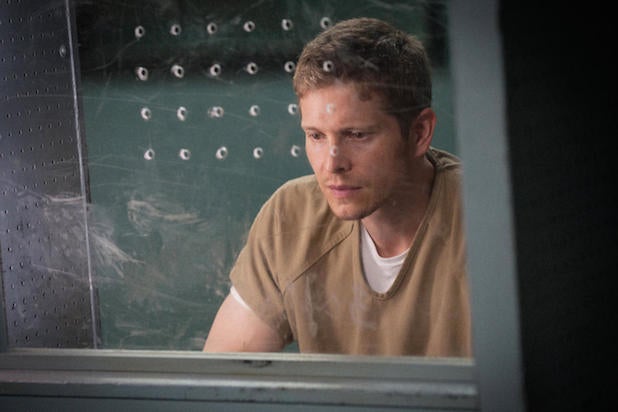 In six seasons as cutthroat litigator Cary Agos in CBS series “The Good Wife,” Matt Czuchry has played both foil and friend to Julianna Margulies‘ high-powered lawyer Alicia Florrick, and the most recent season marked his character’s biggest arc yet. His arrest in the season’s first episode set the stage for dramatic storylines and juicy scenes, grabbing deserved awards-season attention.

Czuchry tells TheWrap what he would pick for a last meal, which lawyer on the show would be his first call if he ever got into legal trouble and details on that infamous final scene between Alicia and Kalinda.

What was the toughest thing you had to do this season?
Staying constantly in the proper emotional headspace for that 11-episode arc. My character’s arc this year involved going to prison and having an impending trial hanging over his head. So If I wanted that arc to be believable to the audience, it’s not like I could finish shooting a scene and then go up to my trailer and make calls or answer emails. That was incredibly taxing. But the audience seemed to connect with it and that brought me a lot of satisfaction.

What was the most fun thing you got to do this season?
The fun was in the challenge of coming home from an exhausting day and feeling like you made these incredibly complex imaginary situations come to life. In addition to that, there’s a scene where my character gets his hand sliced as a test of loyalty to the biggest drug dealer in Chicago. It was fun making that scene come to life with all the special effects. The plastic tube holding all the fake blood exploded and huge amounts of blood squirted all over the crew. So that was a pretty damn fun day.

Let’s assume that somebody has never seen your show. What would you say to persuade them to watch it?
Our show shines in gray areas. Moral gray areas, legal gray areas, even family issues on the show deal with gray areas. These are real-life, difficult situations we all face as individuals. “The Good Wife” is complex and nuanced because of those gray areas.

Who else on your show really deserves an Emmy, and why?
Robert and Michelle King are the creators of the show and everything begins and ends with them. They won the Writer’s Guild Award last season, and I would love for them to get recognition for writing Season 6.

Are you a binge-watcher, or a once-a-weeker? What was the last show you binged and how many hours did you go?
I love both. I would say my sweet spot is probably three episodes in one sitting. That way you get a flow for the storyline but you’re also left wanting more. Recently I binge-watched “Transparent” and “Bloodline.” I watched the entire “Transparent” season in one day.

If you could add any new category to the , serious or silly, what would it be?
“Best Crew Ensemble in Television” and that inaugural Emmy would have to go to the crew of “Good Wife.” And yes, I’m biased.

Since you spent most of Season 6 in prison, what would your last meal be?
French fries, peanut butter and jelly and a Reese’s Pieces sundae from Friendly’s.

If you ever needed a lawyer, which Florrick Agos & Associates lawyer would you call?
It would be Alicia Florrick because of all her connections, not only in the legal world but the policitcal world as well.

There was a lot of talk about Alicia (Margulies) and Kalinda’s (Archie Panjabi) final scene which was reportedly shot separately because the two actresses don’t get along. Is that true?
That’s a question for the producers. That’s how I’ll answer that.