“Gossip Girl” Season 2 picks up with Little Z in a much different spot than the first season, as Zoya attempts to distance herself from her sister, Julien, and the whirlwind of scandal that made for a tumultuous entrance to the Upper East Side.

“She’s trying to build her own safe space, outside of her home and outside of her relationship with her sister and her sister’s boyfriend and the drama that inevitably comes with it,” Whitney Peak told TheWrap. “We find her with Shan just wreaking havoc, but not not so much in a serious or detrimental way, just in kind of a fun scheme-y, prank-y way.”

Despite the twists and turns that called Zoya’s relationship with Julien and her father, Nick, into question, Zoya and Nick welcome Julien into their home after Julien’s father is accused of sexual assault — leading the family to a moment of optimism together, despite the new challenges that come with living under one roof. 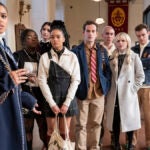 “They’re all kind of in an okay place, navigating how to live with Julian and actually have a sister and sharing the bathroom and Julien’s clothes being everywhere, and kind of having to share a lot of her space continuously in her own home, which she hasn’t really had to do before with except with her dad,” Peak said, adding that Zoya remains in Julien’s shadow at school as well.

As she begins to carve out space for new relationships apart from her sister, Zoya grows close with Shan, a vivacious trouble maker who schemes alongside Zoya while also making her feel at home with her family, who offers a different dynamic than Zoya had while growing up with just her dad.

“When Zoya starts to slowly spend more time with Shannon’s family, she then starts to feel a guilt of why does she feel like she belongs so much here but then doesn’t in her own home?” Peak said. “That opens up different doors and conversations and qualms with her dad and with Julien.” 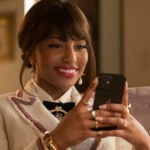 Although welcoming Zoya with open arms into their home has resulted in her spending less time with her own family, Grace Duah, who plays Shan, says it might actually prompt Zoya to reexamine what her ideal family life looks like.

“I think every person Zoya has met up until this point, when she meets their parents, she finds out there’s a worse version almost entirely,” Duah told TheWrap. “Seeing that solid family unit, I think it’s eye-opening as to the relationship she wants with her dad.”

Her stable family life has caused Shan to never have to “think too hard about anything” and have a “low stakes life,” according to Duah, since she knows she can rely on her parents — enabling her dabble in mischief into which she soon drags Zoya.

“She just goes with the first idea that pops in her head and that works for her,” Duah said. “Zoya is in a place in her life where she needs to think a little bit more before she does things, and Shan is not gonna help her do that.”