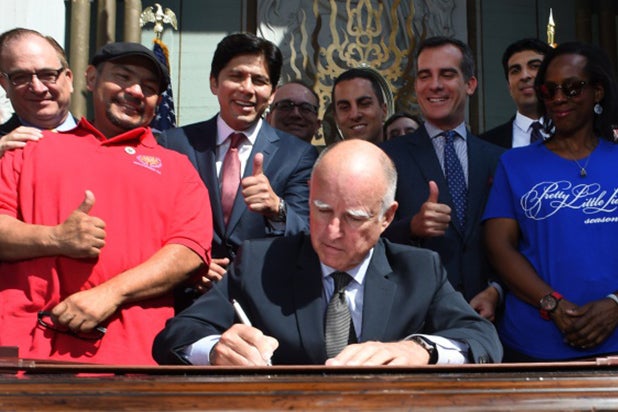 California Gov. Brown signed the state’s new TV and film tax credit program into law in a ceremony in front of Hollywood’s Chinese Theatre on Thursday.

The showy setting — for years, the site of premieres for blockbuster movies — seemed appropriate for approving the measure, which greatly enlarges and deepens the state’s commitment to keeping one of its signature industries, which has been gutted in recent years.

“Today, we remind the world that the Golden State is the home of the silver screen,” said Gov. Brown. “This bill helps thousands of Californians — from stage hands and set designers to electricians and delivery drivers.”

Also read: Why Is California Tripling Film and TV Tax Credits While Other States Slash Them?

It provides $1.65 billion in incentives over the next five years, with $330 million going to producers annually, more than tripling the current level.  It will allow many more projects to qualify for the subsidies, including big-budget features and TV pilots, and phase out the hugely over-subscribed lottery currently used to select applicants. Details of the changes can be found at the California Film Commission web site.

The ceremony was attended by L.A. Mayor Eric Garcetti, a major proponent of the bill, and its authors, Assemblymen Raul Bocanegra (D-Pacoima) and Mike Gatto (D-Los Angeles). Other government leaders, studio and network representatives and members of the guilds, unions and small businesses who came together as a coalition to support AB 1839 were also on hand. Actor Warren Beatty provided some A-list star power.

While not matching the $420 million annually that New York offers, the expansion of California’s program will level the playing field. New York, Louisiana and Georgia, as well as Canada and the U.K., have siphoned off huge chunks of California’s once dominant TV and film production industry by offering juicy tax incentives.

It has cost California more than 47,000 jobs and $9.6 billion in economic output to rivals, according to a study done by the state’s local governments. Of this summer’s top ten movies at the box office, only the Universal Pictures comedy “Neighbors” was filmed in the state.

The California Film and Television Job Retention and Promotion Act of 2014 sailed through the Legislature with little opposition, but Brown’s backing was not a given. The measure was opposed by some of his strongest allies, unions representing teachers and other school workers, who believed the money would have been better spent on education.

“The MPAA and the studios we represent appreciate the Governor’s leadership in growing California’s motion picture and television incentive to bring good middle class jobs to the state, and we thank him for his recognition of the importance of film and TV production to the vitality of California’s economy,” said Motion Picture Association of America Chairman and chief executive Chris Dodd.

Warner Bros. Pictures President of Worldwide Physical Production Steve Papazian said the bill would turn the tide on the loss of technical and creative jobs lost by the state over the past two decades.

“The legislation is a catalyst to grow those positions for the thousands of current and future crew members who want to work here and for the myriad small businesses that supply and support our industry every day,” he said.

Caroline Beteta, president and chief executive at the non-profit agency Visit California, said the bill would provide a boost for tourism in the state.

“The global impact and reach of the state’s movie and film industry – which helps to tell the California story – is intertwined with our history and part of our state’s unmatched allure. In fact, Hollywood is among California’s most appealing destinations for travelers in 11 international markets. This appeal spurs tourist visits to all parts of the Golden State and contributes to a thriving tourism economy.”