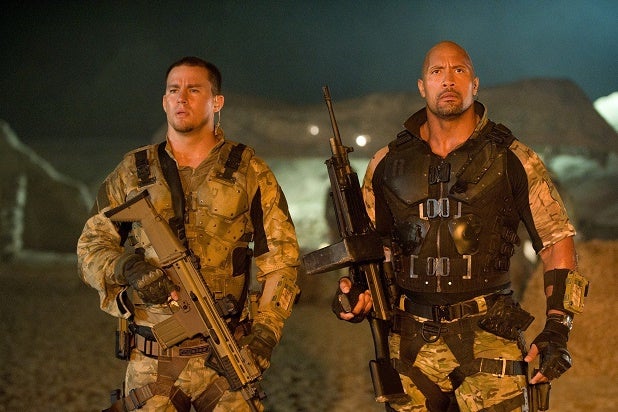 When it comes to major movies, California is no longer the world’s production capital — that would be Louisiana, according to a new study released Thursday.

Eighteen of the 108 films released last year that were produced by the major studios and the five biggest independents were shot in the Bayou State, according to the 2013 Feature Film Production Study from FilmL.A., the region’s non-profit permitting agency. Paramount’s “G.I. Joe: Retaliation,” Focus Features’ “Dallas Buyers Club” and Warner Bros.’ “Grudge Match” were among the movies shot in Louisiana.

The surveyed films represent $7.6 billion in direct spending and tens of thousands of jobs in an array of professions, the report found.

The United States is still the No. 1 nation for film production, with 70 features shot here. But California is now sharing its former wealth with a number of other states that offer more lucrative tax credits and film incentives. Twenty different states and foreign countries were used as primary production locations.

And things would look even more bleak for California were it not for animated movies like “Monsters University,” “The Croods” and “Frozen.” In terms of just live-action, California now ranks fourth behind Louisiana, the U.K. and Canada in feature projects, spending and jobs.

The numbers confirm what most people in California’s film and TV industry feared. The state’s share of projects has been steadily eroding since 1997, when Canadian provinces began offering significant tax credits for TV producers and filmmakers. Now, more than 40 U.S. states and a dozen foreign countries offer incentives and it’s taken a serious toll on the state.

California produced 68 percent of the top 25 movies at the worldwide box office in 1997. In 2013, it was down to eight percent. Of the 26 live-action films with production budgets over $100 million, just two — “The Hangover Part III” and “Star Trek: Into Darkness” — were filmed primarily in California.

The state hosted only nine other live-action movies in the study, and they had a combined budget value of $194 million in spending. Five of these films (accounting for $161 million in spending) were only able to film in California because of the state’s tax credit program.

(It won’t get any better this year. Only two films with budgets over $100 million that are set for release in 2014 — “Captain America: Winter Soldier” and “Interstellar” — were shot in the state.)

There’s a solution to the state’s runaway production problem, according to FilmL.A. president Paul Audley.

“Considering California’s vast filmmaking talent, the state should be exporting films for global audiences, not jobs to global competitors,” he said. “State policymakers have the opportunity to make a difference this year by expanding California’s film and television tax credit. We hope they give the strongest possible signal to the film industry that they want to keep film jobs in California.”

The state Legislature is considering a bill introduced last month that would expand the state’s incentive program that was launched in 2009 to make big budget movies and network TV shows eligible for the tax breaks for the first time.

Los Angeles Mayor Eric Garcetti, a proponent of the legislation, said the survey made clear how important the industry was to the region and state.

“The film and entertainment industries are absolutely essential to California’s middle class, and this underscores the importance of our work to level the playing field against the other states and countries who are luring our jobs away,” said Garcetti. “These jobs not only support California families, they generate revenues that pay for schools, infrastructure, and other state services.”

The FilmL.A. study focused on films that were produced by the six major studios in Southern California — Disney, Warner Bros., Universal, Paramount. Sony and 20th Century Fox — and five of the best-known independent studios: DreamWorks, Lionsgate, the Weinstein Company, Film District and Relativity.