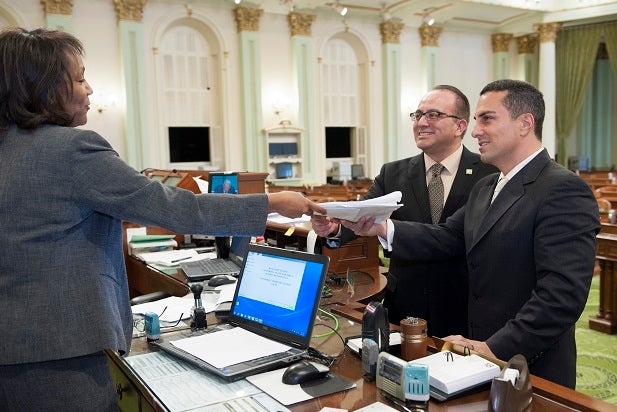 A new bill introduced to the State Legislature Wednesday morning could extend and expand California’s Film and Tax Credit Program.

For the first time, big-budget movies and network TV shows would be eligible for incentives under AB1839, which was authored by Assemblymen Raul Bocanegra and Mike Gatto, along with 50 other Assembly members and 9 State Senators.

For the past decade, California has scrambled to preserve its signature movie and TV industry as other states and countries have lured away big productions with their incentive programs.

The bill’s provisions include:

* Lifting the budget cap on feature films eligible to apply for the program. A film of any size will be able to apply to the program, however only qualified expenditures of up to $100 million will be eligible for the credit.

* Offering a 5 percent increase in the tax credit for filming done outside of the Los Angeles Zone (to a total of 25 percent).

* Offering a 25 percent credit for television shows relocating to California in the first year.

The legislation is backed by Los Angeles Mayor Eric Garcetti, as well as a coalition that includes production guilds and the film industry’s lobbying arm, the Motion Picture Association of America. If it passes the state senate and general assembly, then a signature decision by Gov. Jerry Brown is expected by next Labor Day.

“This expanded and improved program will go a long way towards making California more competitive with other state’s programs,” said Bocanegra, who is chairman of the Assembly Committee on Revenue and Taxation. “Right now, we’re getting our lunch handed to us by these other states. We simply can’t sit by and watch this $17 billion a year sector of our economy continue to leave California.”

Since the program was created in 2009, it has saved or created as many as 51,000 well-paying jobs from leaving the state, and generated $4.5 billion in economic activity statewide, according to Bocanegra.

“Every single economic analysis of the program shows that it’s a net economic generator for the state,” he said. “It creates revenue and tens of thousands of jobs, it’s a win-win.”

Currently, more than 40 states and a dozen countries offer some form of tax incentives, and the consequences are being acutely felt in the entertainment capital.

Most states’ incentive plans have more money to offer than California’s. New York’s program, for example, is capped at $420 million annually.

Since it was introduced in 2009, California’s plan has been renewed twice but it is due to expire in 2015. Producers have complained that it has been difficult to plan ahead because of the uncertainty of the renewals.

The multiple authors on the legislation is in part to signal its broad support across the state. That’s seen as critical for passage, since critics charge that the bill benefits only Hollywood. The bill’s 5-percent tax bonus for shoots outside the L.A. area is designed to win support in Central and Northern California, as well.

“I am very pleased that my colleagues in the Assembly recognize that film productions have huge economic impacts in communities across the state,” said Democratic Assemblyman Rob Bonta of Oakland, a principal co-author of the bill.

“When production goes elsewhere, so do the jobs, tax revenue, and spending that are critical to the strength of our state’s economy,” the coalition said in a statement. “In order to once again be competitive, California must put in place a meaningful, expanded credit that will bring back jobs, increase revenue, and support small businesses and vendors all across the state. … Too much is at stake for the people of California to let this heritage industry slip away.”

The alliance is a coalition of guilds, unions, producers, small businesses, and associations that have worked together for more than a decade to promote film and television production in the state.