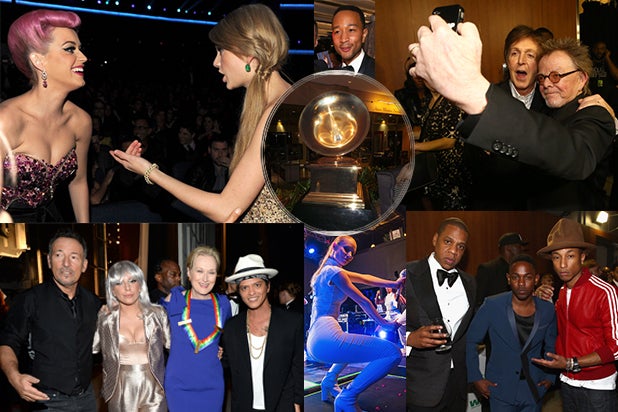 Faces coming to a party near you. (Getty Images; Mikey Glazer)

The Grammys are here, which means it’s time for America to warm up those thumbs for hate tweeting Taylor Swift’s aw-shucks, girl-at-a-concert routine and LL Cool J’s proportionally goofy headwear.

Music’s biggest awards show is not one of Hollywood’s favorite on the party circuit. With a diverse scene of parties, most events are over-RSVP’d and diluted with people whose sole credit is owning Beats headphones.

On the plus side, Grammy party producers are likely seeing a reduction in their event insurance premiums now that bullet and mayhem magnet Suge Knight is locked up without bail.

Unlike the Emmys, Oscars, or Golden Globes, the artists actually ply their trade all weekend. Grammy parties have music, lots of it.

From Jennifer Hudson to John Legend and Lil Kim to the “big homie” himself, Jay Z, here are TheWrap’s Party Report picks of the most solid invites during Grammys weekend in L.A.

Thursday, February 5
Thursday night is one of the busiest.

Delta smartly leverages its partnership as the official airline of the Grammys by jetting in two-time nominee Charli XCX to jump start the party weekend. There will be dancing atop 9200 Sunset.

A performance concert more than a party, Childish Gambino, The Weeknd, Mat Zo, and Samantha Ronson will perform at the mashup collaboration of old and new media. Rolling Stone has been on a tear in 2015 after a rough UVA rape-retraction blemish in 2014. They hosted events at both Sundance and the Super Bowl in the last 10 days.

Beverly Hills Hotel boycott be damned. The glossy mag has no fear.

This is the second unusual venue for Legend in a week, capping DirecTV’s Super Bowl bash with Rihanna and surprise guest Kanye West. Legend stole the Sunday morning social media crown with the four-shot Waffle House selfie of himself, wife Chrissy Teigen, West and his reality star wife, who will never see this story because it won’t hit her google alert.

Legend and pal are having a moment this awards season for their song “Glory” in the film “Selma” — winning the Globe and getting an Oscar nomination. Individually, Legend is up for a Grammy for “All of Me.” The event will also support his “Show Me Campaign,” aimed at criminal justice reform.

The list is strong: Diplo, Arctic Monkeys, Paul Oakenfold, Ava DuVernay, Common, Bastille, producer J-Roc, Carmen Electra, Cliff Clavin, O-Town (attempting a comeback), and a gaggle of ladies from the “Real Housewives” franchise and “The Real,” who no doubt are aspiring to catch the eye of L.A. Confidential publisher Alison Miller and Editor-In-Chief Spencer Beck for their own cover shoots one day.

Jill Scott receives the 2015 Black Women in Music Award. A decade-by-decade evolving lineup of performances will come from Chaka Khan, Brandy, and Lianne La Havas. Essence is using the Twitter hashtag #BlackWomenInMusic and will livestream the event on its website.

Turn It Up for Change Ball
W Hollywood, 9 p.m.

Jennifer Hudson (slated to perform), Kelly Osbourne, Dita Von Teese, and Liberty Ross are among the famous faces who will be part of the “Voguing Ball.” The cause — nationwide marriage equality and the “fight for 50” campaign, as in marriage equality in all 50 states.

The Food Salon presented by Questlove
Private Residence, The Hills

After a week in L.A. with Jimmy Fallon’s West Coast “Tonight Show” homecoming, the root of “The Roots” turns down the volume, hosting an intimate gathering of “thought leaders in art, design, music, film, TV, and food,” the no-frills text invitation declares. There will be no servers, no dress code, and no white table cloths. It’s the open-kitchen restaurant analog to a house party.

Questlove is bringing in three chef friends to fuel the night, one the 15-year-old Flynn McGarry, who got the cover of the New York Times Magazine last year. The other two have been acknowledged for James Beard Awards: Maxime Bilet and Angela Pinkerton.

Press and media free, there is one creative partner in Dell, whic has been making a push into Hollywood’s creative community.

Blocks away from MusiCares, five figures join together in a new get-together. The principals: KCRW’s Jason Bentley, dFm President Jesse Lee, Windish Agency President Tom Windish (who books Lorde, Alt-J, M83 and has had over 20 acts on Coachella and 121 at SXSW), producer Ludwig Goransson, and Roc Nation manager Jon Lieberberg.

Windish and Lee hosted the artists brunch during the pre-opening of Soho House Chicago during Lollapalooza weekend last summer, a choice enclave.

“While this is the inception of an annual celebration, we plan on inviting other friends into the mix each year, to hit all aspects of the music industry,” dFm’s Lee says.

TheAudience, the social media management company that helped vault Steve Aoki from Tuesday night Nissan party DJ waiting for Kelly Clarkson to finish to global phenom on the side of the MGM, is throwing a party. The group that manages social and campaigns for celebrities has garnered the title of an “Official Pre-Grammy Party” for their efforts. Calvin Harris, Chrissy Teigen, Jamie Foxx, Diplo, Frank Ocean, and the aforementioned John Legend are all expected.

Getting past the rope will require a “Magic Stick” (*rimshot*).

Only days after producing TAO Group’s Super Bowl pop up in Arizona, the event-focused EFG PR group flips over to the other traveling nightlife brand for this Grammy weekend event. Event regular Ana Calderon will DJ before the performance of the song that won Lil Kim a Grammy, “Lady Marmalade.”

Rihanna is a regular. This is always over subscribed. They are moving out of Soho House and in to a “mo-flow” house for more room. Jay Z is the host, and not in a nightclub “hosted by” way. It’s his company.

Fresh off a series of acquisitions and mergers in late 2014 and early 2015 (including Mark Burg’s Evolution, behind Charlie Sheen vehicles “Two and a Half Men” and “Anger Management” as well as the “Saw” franchise), the talent management, music publishing, and marketing company throws a party in the same space that Anonymous Content did the night before the Globes.

The late Joan Rivers slung one liners on the carpet at last year’s Clive Davis party on January 25, 2014. (Mikey Glazer)

Nobody ever knows for sure who is going to perform (first course of EDM with “Afrojack” one year, a story-time with Usher over dessert), but the list of modern relevant names reportedly includes Miley Cyrus, Sam Smith, Usher, Pharrell and Iggy.

There are always classics too (Paul Shaffer chewing up the carpet early, Berry Gordy with his now-defunct LMFAO nephew) and a few outside their lane oddballs, like Hota Kotb. Last January, Joan Rivers cracked up media for the length of the long curving carpet.

Nielsen Pre-Grammy Party
Hyde, West Hollywood
The famous Preservation Hall Jazz Band and Bastille are backed up by the ever-present Michelle Pesce. Live music is back in the former home of Coconut Teaszer.

The “Beautiful Girls” and “Take You There” singer throws a party in what looks like a former department store on a not-yet made-over block of Hollywood Boulevard. His sister, an aspiring “multi-media host” and accomplished Instagram-model, butt-selfie poster is listed as a co-host.

Sunday Night, After the Show

The top shelf management company, and sister marketing agency Greenlight, which turned out great campaigns with Cam Newton in addition to TheWrap this year, will not travel far from its Sunset Boulevard offices above Katana. Vevo and Upstaging are on as party partners. This one will hit capacity quickly.

At their last big Hollywood party, Dave Chappelle did stand up and Michael Sam walked around starstruck. Editor-In-Chief Jim Nelson’s cross-label, cross-genre post-show party with Giorgio Armani is one to aim for.

After the Los Angeles County Sheriff’s Department abruptly shut down the music on the deck of the Sunset Tower last Grammy night, killing the party, WMG is on the move across the street.

There will be live music. Your move, Sheriff.

Fresh off a pitch perfect send-up of Showtime’s “Episodes,” Dina Rezvanipour’s “Distinctive Assets” gifting suite is the official swagateria of the Grammys, aimed at nabbing the talent during Staples Center rehearsals.

Notable swag includes “velour track suits from Sean John,” Gibson guitars, a “luxury rail journey through the Canadian Rockies” from Rocky Mountaineer (who has time for that?), a shovel of beauty supplies, and something called “MiPosaurs by WowWee,” which may or may not make you the “Poser” when that picture gets taken.