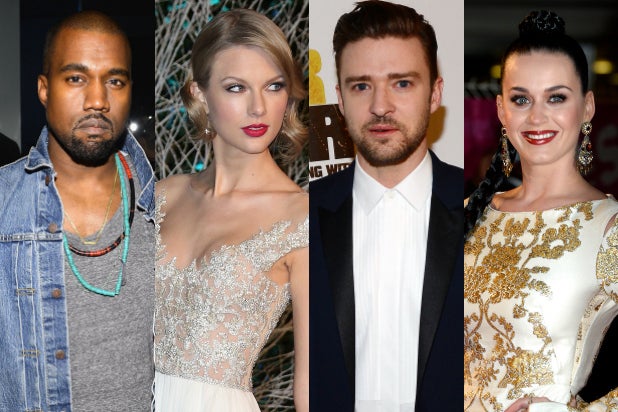 The Grammys remain harder to predict than any other major set of awards, thanks to an increasingly huge and diversifying voter base, not to mention the ongoing fragmentation of America’s musical tastes. But who can resist trying to “Get Lucky” anyway by predicting how the Recording Academy might go?

One thing is for sure: any Adele-style “sweep” headlines the day after are out of the question, since the likeliest candidate for across-the-board trophies, Lorde, failed to get recognized by the committees controlling the Album and New Artist categories. But even if she doesn’t lord it over the entire crop, we suspect Lorde will go home pretty happy anyway, as should fellow upstarts Macklemore & Lewis.

See photos: Grammy Winners: Where Are They Now?

It’s easy to rule out Bareilles and Lamar, who did first-rate work — but who were clearly thrown in by the nominating committee to stylistically diversify the category’s ranks, not because of massive support bases. Macklemore & Lewis will get their due elsewhere, and Grammy voters may feel iffy about giving their most prestigious honor to a disco album, however ubiquitous Daft Punk’s was. That leaves Swift, pop’s most reliable seller and a critics’ favorite to boot. The only reason to question that is how her previous album wasn’t even nominated after the one preceding it won, but that was likely more a peculiarity of the nominating committee than the overall votership. Also consider the Recording Academy’s massive presence in Nashville, where she’s pretty much the Woman of the Millennium, and you’ll probably be “Red”-faced if you count Swift out.

The Thicke song is video-driven piffle, the Mars song feels older than a moon rock, and Imagine Dragons are truly radioactive when it comes to rock cred. So the contest is a nail-biter between Lorde and Daft Punk. The Grammys have a history of honoring young women for acclaimed freshman projects, so voters might rather see her at the podium than a couple of guys in masks.

Given how gay marriage isn’t going away any decade soon as the country’s hot issue, the mostly liberal Grammy voter base will welcome a chance to award a song that engages a social issue, even if it’s not the year’s primary example of actual writing chops.

Should win: “Just Give Me a Reason”
Will win: “Same Love”

The obvious winner: Lorde! Wait – she’s really not listed here? Almost two months after the announcement, we still can’t quite believe it either. As for previous Grammy nominee Sheeran, isn’t he 40 by now, or does it only feel like it? This feels like Macklemore & Lewis’s to lose, although either Lamar or Musgraves could pull off an upset if their critical support is deemed more important than their genre boundaries.

The irony of “Roar” being nominated alongside “Brave,” the song it’s been accused of ripping off, won’t be lost on many, and it won’t help Perry. Lorde is likely to win a lot of awards as partial consolation for not having been even nominated for new artist or album, and this should be one of them. But don’t rule out the affection for Timberlake or Bareilles as the kind of traditional talents older voters prefer.

A consolation prize for “Get Lucky” if it fails as record of the year… or part of a sweep if we underrated its potential in the top category.

Grammy voters like their veterans, but hardly anyone heard the Young or Sabbath albums, and Led Zep would have a better shot if they hadn’t immediately re-retired as a group after one live performance and album. With only the widely beloved QOTSA for serious competition, Bowie is the Thin White Dominator here, and voters won’t even mind that he won’t show up.

At a time in their career when they should be falling off the radar, Vampire Weekend’s album came in second in the Village Voice critics’ poll, trailing only Kanye West’s. That doesn’t mean many voters won’t automatically click on relative elder statesman Trent Reznor, but the trend favors incisors over nails.

Keys’ days as the Grammys’ newcomer queen are less remembered now than her credit-card commercials, but she’s still got the cache to dominate a field like this.

Talk about up for grabs: This could go almost any way… except, probably, poor Jay-Z’s. Drake could easily add this to “well-liked SNL double-threat” on his list of 2014 accomplishments. But his rival, West, did just top the Village Voice critics’ poll with Yeezus — and he’s not the only one angered it didn’t get a nod in the top album category. On the other hand, even some of Kanye’s own fans disliked the record’s nasty mood and misogynistic lyrics. Less hardcore rap fans will go for the obvious feel-good choice and continue the Macklemore semi-sweep.

If we’re saying “Red” has the best bet at taking the cross-genre Album of the Year trophy, it only goes to stand that we’d predict it for Country Album, too. And we are. And yet… There will be those who will gripe that Swift’s album contains almost no music that is clearly stylistically identifiable as country, which could cause the slightest of backlashes here. If so, the beneficiary might be not one of the three in-the-pocket hunks in the category, but Musgraves, who had one of the most critically hailed albums of any genre in 2013 and could be an easy check-off for voters who aren’t into either Swift’s pop glam or the Nashville bro-country mainstream.

Should win: Musgraves or Swift (a tie)
Will win: Swift

Let’s see: Will it be the most ubiquitous cross-genre party album of the year… or one of four other albums that 99 percent of Grammy voters haven’t heard of? This category exists this year just to ensure that, whatever other embarrassments occur in your betting pool, you’ll be able to claim at least one correct.