Yes, Shrek showed up — all green and in 3D — to open the ninth Tribeca Film Festival.

The director was featured in a promotional trailer for the fest from sponsor American Express that preceded the screening of "Shrek Forever After." 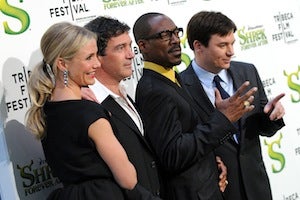 Scorsese was shown picking up photos he’d shot at a nephew’s fifth birthday party. After hastily leafing through them, he decides he has framed the pictures badly and missed key moments.

As he stomps out of the store, he barks into a cellphone, “It’s Uncle Marty. How would you like to turn five again?”

Featuring an especially rich line-up of international and independent films, the festivities began as in the past in midtown, at the Ziegfeld Theatre on West 54th, and ended up with a gala party a few blocks away at the Museum of Modern Art.

There was the requisite long red-carpet line, string of paparazzi and crowds two-deep and a blog long hoping for a glimpse of in-attendance stars like the film's Mike Myers, Cameron Diaz, Eddie Murphy and Antonio Banderas — as well as the likes of Taylor Bagley, Zach Braff and Jesse McCartney.

NBC chief Jeff Zucker, there with a bunch of kids, was checking his Blackberry throughout the screening. Maybe he was tweeting his review.

As for the film, it received the expected warm reception. Indeed, the latest Shrek chapter is relentlessly clever in an up-to-the-minute, pop culture-riffing way and all the familiar beloved regulars make welcome returns. The biggest scene-stealer: Puss in Boots (voiced by Banderas), who has grown woefully fat and out of shape here. 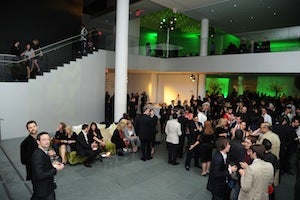 But as with the last Shrek adventure, the plot has a palpable feel of déjà vu: Shrek is bored with his life as a swampburbian husband and father. “I used to be an ogre,” he wails, “now I’m just a jolly green joke.”

After the film, invited guests trudged a block east on West 54th to the post-premiere party at MOMA.

Braff (a juror this year at the festival) was there, as was James Gandolfini, accompanied by his wife and son. Fest director Geoff Gilmore was making the rounds, as Katzenberg accepted congratulations and waiters circulated with hors d’ouevres.

Thankfully, no green cocktails. But the party’s highlight: a food station serving chimichangas — the deep-fried burritos figure into one of the movie’s better jokes — in the museum’s sculpture garden.

Now it’s on to the real business of the fest: 85 features and 47 shorts from 38 different countries; 44 world premieres; 15 North American premieres, a range of panel discussions, and a variety of affiliated events: the Tribeca Drive-In, the Tribeca/ESPN Sports Day, the Tribeca Family Festival