The Tribeca Film Festival, which kicks off its 12-day run with a Wednesday night 3D screening of “Shrek Forever After,” occupies an odd niche in the crowded film festival calendar.

Just nine years old, Tribeca has always seemed to be something of a baby brother to the New York Film Festival, which takes place in the fall and will stage its 48th festival this year.

For the most part Tribeca falls too early in the year to serve as a launching pad for awards season; it doesn’t have the international clout of Cannes, which follows it by less than two weeks, and it doesn’t get the cream of independent films in the way that Sundance and Toronto do. 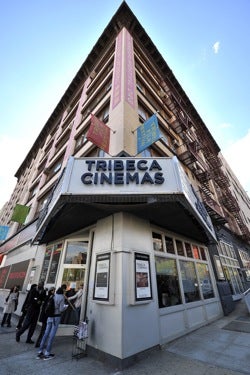 At times it’s been best known for its famous co-founder, Robert DeNiro; its deep pockets, courtesy of sponsors like American Express; its for-profit designation, a relative rarity among film festivals; and its ticket prices, which stirred up controversy when they jumped from $12 to $18 in 2007.

(Those prices have since come down, to $16 for weekend and evening screenings and $8 for weekdays and late nights.)

Its special screenings, meanwhile, include a 45th anniversary showing of “Dr. Zhivago,” and a work-in-progress screening of a yet-untitled documentary about disgraced New York governor Eliot Spitzer.

"The aim is to present the most diverse program possible, and to be well-represented internationally," the festival’s director of programming, David Kwok, told theWrap.

The festival also has an affiliated film distribution unit, Tribeca Film, and has eagerly embraced extending its brand through an online presence designed, says festival Geoff Gilmore, as a way of “shifting the way films – and film festivals – are experienced.”

This year’s festival introduces TFF Virtual, which will enable viewers to see panel discussions, Q&A sessions and other aspects of the festival online.  A TFF Virtual premium pass, which costs $45, enables members to stream seven of the festival's films on their home computers.

The films, which were chosen from more than 5,000 submissions, are separated into several different sections, including the World Narratibve Feature and World Documentary Feature competitions, the Global Cinema Showcase, and the Encounters, Discovery, Cinemania and Spotlight sections.

In past years, Alex Gibney’s “Taxi to the Dark Side” has to be one of Tribeca’s biggest success stories, winning at the festival months before it scored something of a surprise victory in the Oscars’ Documentary Feature category.

And Gibney returns this year as the festival’s dominant filmmaker, screening two full-length docs and one segment of an anthology project.

One of Gibney’s films, “My Trip to Al-Qaeda,” is considered particularly apt for a festival that got its start in the months after the 9/11 terrorist attack: the film is based on Lawrence Wright’s one-man show that dealt with the road to 9/11. In the New York Times, Stephen Holden called Gibney’s film “an utterly compelling (dare I say entertaining?) personal history lesson, filled with insights that come as little jolts.”

Among the other documentaries that have picked up strong buzz in advance of the festival are “Climate of Change,” an ecological doc narrated by Tilda Swinton; Debra Scranton’s “Earth Made of Glass,” which looks at French involvement in the 1994 genocide in Rwanda; “Thieves by Law,” about the Russian Mafia; and “The Two Escobars,” about drug kingpin Pablo Escobar and soccer player Andres Escobar.

Filmmaker magazine, meanwhile, called Dustin Thompson’s experimental “Travelogues” “one of the most incredible movies at Tribeca,” although “probably the least commercial.”

Among the narrative features screening at Tribeca, “Get Low” picked up some Oscar buzz for Robert Duvall when it screened late last year, while Howard Feinstein says that “The Space Between,” from first-time director Travis Fine, features Melissa Leo in “one of the finest performances in recent memory.”

Nicole Holofcener’s “Please Give” was well-received at Sundance, while another of that festival’s entries, Michael Winterbottom’s adaptation of the Jim Thompson novel “The Killer Inside Me,” stirred up controversy for its extreme violence.

But that’s just the tip of the iceberg. Leah Rozen will have regular reports from Tribeca for theWrap.

The full lineup of films and programs is available at the Tribeca Film Festival website.