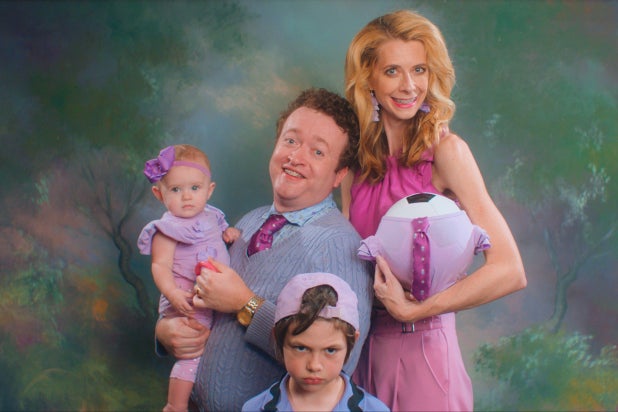 There’s a certain kind of comedy fan most likely to embrace a satire featuring lines like, “I don’t mean to be a Native American-giver, but now that my only child is a dog, would it be possible to get back the baby I gave you?”

If this head-spinning level of absurdity is your thing, “Greener Grass” will be, too. Writer-director-costar team Jocelyn DeBoer and Dawn Luebbe (former members of Upright Citizens Brigade) are sharp parodists, and they spare no one in their evisceration of suburban superficiality. But they’ve expanded this project from their original short film, and the lengthier treatment may incite some moments of okay-we-get-it antsiness from more impatient viewers.

The movie’s biggest asset is DeBoer, who plays sweetly dim soccer mom Jill with a commitment that’s alternately terrifying and heartbreaking. Jill, who works painfully hard to meet her community’s ideal, always wears an eager smile and a perfect ensemble.

It’s not easy to keep up with one’s neighbors, but no one would dream of ignoring the stringent standards. The guys (including Beck Bennett and Neil Casey from “SNL”) wear pastel golf shirts and madras shorts while barbecuing with hearty cheer in their lush backyards. Their kids, who have names like Citronella and Marriott, will literally do whatever it takes to please their stern teacher (D’Arcy Carden, “The Good Place”) and anxious parents.

And the women (including Mary Holland, “Veep”) work full-time to fit in, wearing braces to fix the nonexistent flaws on their perfect teeth, driving color-matched golf carts to run errands, cooking Pinterest-worthy meals, and arranging immaculate homes that look like Ethan Allen showrooms.

All this effort is wearing on Jill, who spends most of her day either politely thanking people for their ostentatiously passive-aggressive insults, or apologizing for her own imaginary missteps. When her unhappy, ultra-competitive frenemy Lisa (Luebbe) spies Jill’s vulnerability, she moves in for the kill.

Speaking of killings, there’s an actual one that occurs before the movie opens: someone has murdered the yoga teacher, and Jill and Lisa may now be in danger themselves. It’s not a plotline that gains much traction, but Samuel Nobles’ demented score does provide an additional amusing touch.

Watch Video: 'SNL': Beck Bennett Keeps Up His Productivity By Pooping In His Office Supplies

In truth, many of the plot points exist primarily to support a gag. The repetition can start to feel overdone, but the best jokes are acutely-crafted and sold with impressive deadpan by DeBoer, Carden and Bennett. Punchlines this surreal don’t need any underscore, so their style works better than some of the other actors’ broader approach.

It’s hard to say more about the movie without giving away some great reveals. But it is worth noting the excellent work from cinematographer Lowell A. Meyer, who shoots this verdant village as though it’s an offshoot of some droll Lynchian dream. And costume designer Lauren Oppelt (“Other People”) deserves awards for her flawlessly executed #mommystyle. A vision in (Lilly) Pulitzer pink, Jill makes for a sartorially spectacular tour guide through her own impeccably manicured hellscape. She wouldn’t have it any other way.