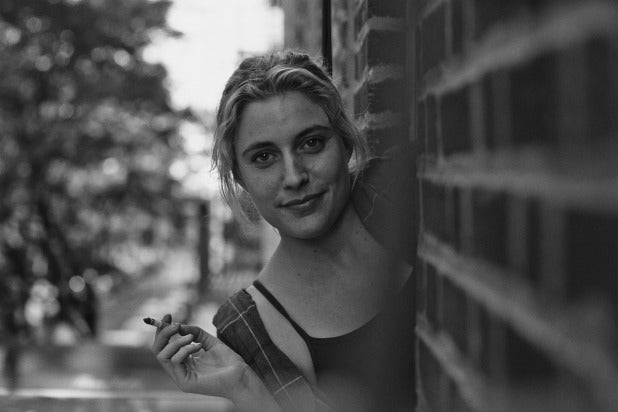 I was a little, momentarily bummed out to hear that Greta Gerwig is doing CBS’s offshoot of “How I Met Your Mother.”

But then I grew up.

I like Gerwig’s indie movies, at least the ones I’ve seen. “Damsels in Distress” is a polished gem, and the sound she makes in “Frances Ha” when a first date tries to touch her shoulder provided the funniest moment in cinema last year.

Lots of other people like her movies too — we call ourselves cinephiles or discriminating or other self-serving, gag-reflex-inducing words. We generally shake our heads when actors with indie cred — Allison Janney or Margo Martindale or Zooey Deschanel — go off to do sitcoms. Because sitcoms, particularly CBS sitcoms, don’t tend to lend themselves to exquisite storytelling and small, telling moments the way indie movies do. CBS has the biggest, broadest audience on television, so its sitcoms tend to be big and broad.

So we see lots of tweets like this one, from Variety’s Andrew Wallenstein, someone I like a lot:

I tear up each time an indie starlet sells out RT @ajmarechal Greta Gerwig to star in HOW I MET YOUR MOTHER spinoff http://t.co/NikdoFMIZF

He speaks for a lot of people, who, like me, also came of age in the ’90s. Grunge, hip-hop, and a slew of great indie filmmakers spread a DIY aesthetic that said artists should work for art, not money. I agree with that.

But here’s the thing: I can’t expect everyone else to live by it. It’s kind of asking a lot to expect total strangers to abide by my personal taste.

Deschanel and Gerwig didn’t ask to be our indie darlings. Maybe they started out wanting to be in blockbusters. Or sitcoms. Maybe they don’t consider their TV shows selling out. Maybe this is where they always wanted to be, and they took what jobs they could get along the way.

Who cares? It’s kind of none of our business.

There is a line: I hate it when multimillionaires make car ads. But we have a perfect system in place for dealing with celebrities you don’t like anymore: Stop paying to see their movies or buying their music. (Who knows? Maybe you already have. Maybe they wouldn’t have made that ad if you hadn’t pirated their last eight albums.)

It’s worth noting that it seems to be a lot easier for men to bounce between high-minded projects and blockbusters without being accused of selling out. Christian Bale moved easily, except for the insane weight fluctuation, between “The Machinist” and “Batman Begins.” Jeremy Renner made an apparently seamless move from “The Hurt Locker” to blockbusters. Joseph Gordon-Levitt has made a similar transition, and so have many other men.

Yes, Jennifer Lawrence has done it, too. And so has Scarlett Johansson. But not as many women have, especially older women.

But none of the actors referenced above are doing sitcoms. The sticking point seems to be sitcoms.

CBS, to its credit, has given Janney and Martindale the chance to star in primetime. I like Janney’s show, “Mom,” a lot more than Martindale’s, “The Millers.”

But both shows give the actresses the freedom to pursue great, smaller projects. In a fun bit of CBS synergy, both women also appear on the network’s premium cable cousin, Showtime, in the acclaimed “Masters of Sex.”

Yes, it’s weird that Gerwig, who’s the kind of indie darling now that Chloe Sevigny was a few years ago — they’ve both even starred in Whit Stillman films — is going from Frances Ha to the pursuit of Hahahas. And it’s kind of a bummer. But at least she’s trying to class up the joint. She plans to write on the show, just as she co-wrote “Frances Ha” with director Noah Baumbach.

“How I Met Your Mother” is maybe the most human-scale of the CBS dramas. I like the show. The spinoff feels like maybe one too many bites at the apple, but who can say. If not for David Lynch’s big, sell-out decision to go to television, we never would have gotten “Twin Peaks.”

Maybe the best TV representation of the ’90s aesthetic was HBO’s “Mr. Show,” which brilliantly shredded sellouts at every turn. The show, from David Cross and Bob Odenkirk, is my favorite comedy series ever made. It’s perfect.

HBO deserves tons of credit for putting it on the air, but the ratings were weak. It inspired lots of other TV shows, and the stars of those shows went off and got very rich and very famous.

A few years ago, Cross went off and made some chipmunk movies. And it’s hard to be mad at him for that.

Would I have rather he went the route of his “Mr. Show” partner, Bob Odenkirk, who later starred on “Breaking Bad”? Sure, but there’s one “Breaking Bad,” and thousands of forgettable sitcoms. And I doubt Cross, also an “Arrested Development” star, would have made IFC’s delightfully weird “The Increasingly Poor Decisions of Todd Margaret” if not for his chipmunk money.

A few years ago, before I covered TV, I saw Odenkirk at a comedy club. It was 2004 and he was doing some beer ads. I told him how much I loved “Mr. Show.”

“Do you like my Miller Beer ads?” he asked.

I searched for something to say, before coming up with this: “I don’t have to pay your bills.”

He said something along the lines of, I’m glad you see it that way.

And a few years later he got “Breaking Bad.” Which means he’s been part of, in my humble estimation, the best comedy and the best drama ever made.

So maybe we just let people run their own lives.