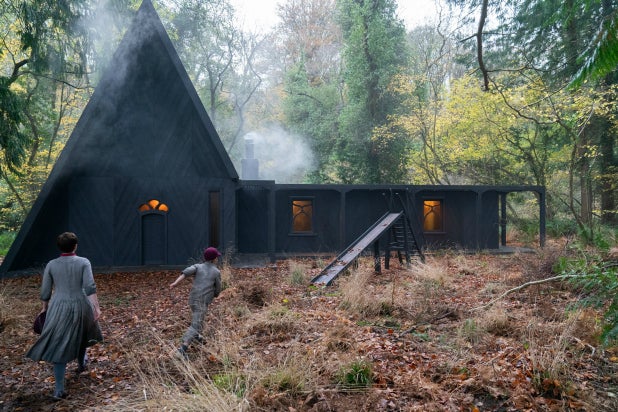 The Brothers Grimm were aptly named: fairy tales like “Hansel and Gretel,” about a destitute couple dying of famine, who abandon their children in the woods to save their own lives, are already scary before a big, bad child-eater comes along. But sure enough, those poor children wander into the ever-so-tempting gingerbread house of a magical witch, who thoroughly intends to devour young Hansel, luring poor Gretel into helping prepare the meal.

Transforming “Hansel and Gretel” into a horror movie is hardly a cognitive leap, and it’s been done before, but perhaps never as stylishly and intelligently as in Osgood “Oz” Perkins’ “Gretel & Hansel.” The latest film from the horror auteur  (The Blackcoat’s Daughter,” “I Am the Pretty Thing That Lives in the House”) is full of severe production design and sensitive characterizations, and unsettling ideas about where fairy tales — and in particular, tales of villainous witches — come from in the first place.

“Gretel and Hansel” stars Sophia Lillis (“It”) as Gretel, a teenager with only two options, as far as she can tell: She can be mistreated by men, or she can die of famine along with her mother and brother. When her mother finds out Gretel has chosen the latter, she takes an axe to the dining room table, sending Gretel and Hansel (Sammy Leaky, “MotherFatherSon”) into the woods to fend for themselves.

It’s not a straight line to the witch’s house. Along the way, Gretel and Hansel encounter strange mutations and at least one character who seems to have stopped by on their way to another fairy tale altogether. The woods aren’t verdant; they’re arid and skeletal. This is no world for young children and young women, because, as Gretel and Hansel learn, their best hope is to find the young boy a job doing punishing labor and, for Gretel, some sort of husband.

Perkins and screenwriter Rob Hayes stretch the seemingly simple story of “Hansel and Gretel” apart like taffy, keeping the whole piece intact but giving us all the more opportunity to savor the experience. The director’s approach to the woodland sequences, rife with introspective voice-overs and dreamy montage, calls to mind a Terrence Malick movie on ‘shrooms; the interconnectivity between humanity and nature isn’t necessarily inspirational, and Gretel and Hansel’s presence amongst the trees only highlights their isolation.

So it’s a bit of a relief when they discover, nestled amongst the foliage, a very swank-looking house, with a triangular construction that completely undermines any sense of architectural consistency with the rest of Perkins’ film. It is not, it’s worth noting, made of gingerbread, but it is full of food: a whole smorgasbord has been laid out in the dining room, nothing suspicious about that, especially not when the owner of the mysterious domicile — Holda (Alice Krige) — invites them to stay, and eat their fill, and escape the seemingly hopeless world outside her doors.

The second half of “Gretel & Hansel” is a creepy saga of temptation and empowerment, as Gretel finds herself repulsed but encouraged by Holda to embrace the inner strengths that everybody else told her were weaknesses. Who cares if the vast buffets of food she prepares every night seemingly come from nowhere, since she has no livestock or farmland to speak of? Who cares if Hansel is increasingly uncomfortable, and starting to hear voices? What if, in this ethereal arthouse piece of ghoulishness, Gretel actually wants to help the witch in the kitchen?

It’s easy to get swept up in the bracing, pointed style of “Gretel & Hansel.” Galo Olivares, the camera operator and “cinematography collaborator” behind “Roma,” frames the action amidst chilly landscapes and inside weird geometric buildings, keeping the audience perpetually off-guard. The witch’s house could be small and could be enormous, and the basement — let’s not think about the basement, except to say that production designer Jeremy Reed (“I Am the Pretty Thing That Lives in the House”) and art director Christine McDonagh (“Into the Badlands”) have followed Perkins’ stark aesthetic interests to a logical, striking, grotesque conclusion.

But the distinctive imagery of “Gretel & Hansel” all serves a single purpose: to put Gretel — played with plaintive power by Lillis, accepting her responsibilities for her brother even as her resentment and personal needs gradually overwhelm her — in a position where sacrificing morality for safety is a logical, even nurturing choice. Krige has the allure of wisdom in her performance, an undeniable power that stems from strength and experience, and unlike many movie villains, her rationalizations seem relatively rational based on what Perkins has shown us about Gretel’s options. Grotesque and wicked, no doubt, but arguably rational.

As a fantasy, “Gretel & Hansel” is a delectably smart concoction, thoughtfully reevaluating the original tale, adding all-new layers of the ominous, and yet also keeping the story rooted in an amorphous, fairy tale past. As a horror movie, Perkins’ movie relies more on disquietude than external threat, and demands a thoughtful audience’s mental energies instead of a rowdy audience’s popcorn-spilling flinches. It’s got “cult movie” written all over it in strawberry jam, which probably isn’t actually strawberry jam, and audiences who tune into its unusual wavelength will no doubt be grateful for such a beautiful, frightening, intelligent new venture into an age-old nightmare.