The Season 19 premiere of “Grey’s Anatomy” is titled “Everything Has Changed” — and for good reason. The episode signaled a major shift for Grey Sloan Memorial Hospital, and for the series as we’ve always known it.

The residency program is being rebuilt after a series of failures that have prompted the hospital to recruit from the bottom of the intern barrel (or, “the diamonds in the rough,” as the show refers to them). Not to mention, the series will move forward with much less of it’s main character, as Ellen Pompeo is set to appear in only eight episodes this season.

So, how do you continue “Grey’s Anatomy” without Meredith Grey? Go back to the roots, said showrunner Krista Vernoff.

Below, Vernoff breaks down more about how the writers forged a new path forward for “Grey’s” without its beloved lead at the center, as well as other details about the Season 19 premiere. 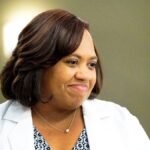 Watching the Season 19 premiere felt very familiar in a lot of ways. It almost is like the series is restarting from the beginning. Why did you feel the best path forward for “Grey’s” was nodding to its past?

We’ve done a major shift multiple times throughout the seasons. When I came in season 14, we did a pretty radical shift. You don’t you never want to allow yourself to give into, ‘Oh, it’s 18 seasons, just do whatever.’ Right? You always want to be excited as a writer, and you always want the actors to be excited by the material that they’re getting, and always want the fans to be excited as well. When the question came up of like, “OK, what next? What now?” It felt like, let’s get back to the roots of the show. If we’re going to have less Ellen, and we knew that we were, what is the thing? And the thing is, we’ve watched Meredith Grey in her class, grow up from baby surgeons to Catherine Fox award-winning chiefs of surgery. The next thing is start again. What would it be like to have a new class now? What would that new class look like in the wake of what Grey Sloan has gone through? So we always start from the storytelling and this is what emerged.

Since you knew that you were going to have less of Ellen this season, how did you work to make the moments we do see Meredith on screen count even more?

That is the challenge this season. How do you, to some degree — I don’t want to say wrap up — but how do you complete the storytelling of Meredith Grey, of having Meredith Grey every week? Meredith is still a part of our universe and we will see her sometimes, but we don’t have her every week. How do you make a satisfying story for her but also get to know all of these new characters? That’s been the challenge, and I hope we’ve done it.

There are many parallels between the original interns and these new interns. How did you develop them without it feeling stale, or like we’d seen this before?

We wanted to nod occasionally at the original season, but not retread the characters or the story. Where Shonda [Rhimes] started was with really well developed characters. The character-driven storytelling in a hospital setting. So the thing that really distinguished “Grey’s Anatomy” at that moment was that it sort of looked like a traditional medical procedural, but was way more driven by romance and humor and heart and character than your typical medical procedural. So, we started with: Who are these people? What are their backstories? What are their families? What can we reveal? How did their backstories reveal their personalities?

Tell me about writing Lucas as Derek and Amelia’s nephew. That was certainly an unexpected and heartwarming reveal.

Well, that was an early idea of: How do we nod to the roots of the show and have fabrics [of those characters] sewn into the show, but not copy a character. The thought of fine picking a character that has some of Derek in him and some of Amelia in him, but when meeting him he’s an intern and a screw up, was so fresh and exciting while it also felt cooked in. 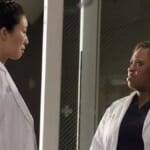 That reveals explains why Amelia is so irritated by their similarities. How is their relationship, and his relationship with Derek, going to influence his trajectory?

Lucas is very much his own event. Meredith says [to Amelia], “He’s you.” But we never got to know Amelia when she was an intern. I think that the primary thing is that the parts of him that remind Amelia of her drive her a little bit crazy and that goes on throughout the season. The black sheep element that we’ve talked about so much for Amelia, and they share family. His mother is Amelia’s sister, who drives Amelia crazy. So there’s fun to be had in all of that but Lucas is has his own struggles and his own journey, which differs from Amelia and Derek’s.

We also see an early nod to the Dobbs decision when Jo orders black scrubs for the OB department. Abortion rights have come up countless times over the course of this series. Can we expect more threads this season?

Yes, there will be. As we had to address the impact of COVID, because we are a medical show, there’s no way to do this season without further addressing the impact of that decision on women’s health.

The hospital is severely understaffed, and we’re already seeing the tensions rise as a result. Can you say more about how that might come in to play this season?

It’s the challenges of opening the hospital in the middle of a matching season. That’s the premise of what Meredith did here. As Bailey puts it in the premiere, they got Catherine Fox to throw a whole lot of money at a whole bunch of new research equipment, and then they worked really hard to find the diamonds in the rough from people who hadn’t matched anywhere else. So it really changes the nature of the program, and also they lost all their senior residents. So for sure, the stress of that plays through the season.

After 19 seasons, are you preparing for the end of ‘Grey’s’?

Honestly, there have been several seasons that I’ve spent some time writing a season and thinking, ‘This is the last season.’ It never has been. So I will not make that mistake again. I think that it has legs, and I will start to imagine the ending when that ink is dried on the paper, and then it’s [really] the ending. 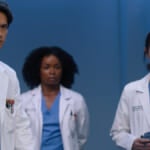