Is it too early to talk about who might host the next Oscar show?

The Corner Cinema website made a few suggestions yesterday. Sasha Stone added some of her own today. The discussion, it seems, is open.

Of course this is all a bit premature – the Oscar host is chosen by the show’s producer, in consultation with the Academy. And as of yet, we don’t have a producer … at least not one who’s been announced. So at the moment, the person mostly responsible for picking the successor to Hugh Jackman (below) may not even be in place. (Photo: AMPAS) 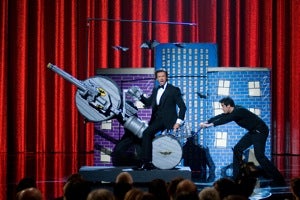 First, a little history. Before and after the Oscar reigns of Bob Hope and Johnny Carson (18 and five gigs as host, respectively), the Academy often as not used a variety of hosts in the same show: Richard Pryor, Jane Fonda, Ellen Burstyn and Warren Beatty one year, Chevy Chase, Goldie Hawn and Paul Hogan another, and sometimes just a raft of presenters who often went under the heading “friends of Oscar.”

It reached a peak, if you can call it that, in the infamous 1989 show produced by Allan Carr. That night, there was no host, just dozens of Oscar's pals assembled in various groupings: Demi Moore and Bruce Willis, Kim Novak and Jimmy Stewart, Michael Caine and Sean Connery and Roger Moore …

The show was such a glitzy, tacky, messy disaster that an Academy review committee was formed to figure out what went wrong. The committee came up with recommendations (emphasize film clips rather than production numbers; cut down on presenter chit-chat …), one of which was to use a single host.

Since then, it’s been one man (or woman), one show. And most of the time, that one man (or woman) has stand-up comedy experience, along with some connection, however peripheral, to the movie business. Billy Crystal did it eight times, Whoopi Goldberg four, Steve Martin and Jon Stewart twice, and David Letterman, Chris Rock and Ellen DeGeneres once each.

Occasionally, feelers were put out to a movie star rather than a comic, but the likes of Tom Hanks and George Clooney could never be persuaded to tackle the gig. Last year’s host, Hugh Jackman, who had plenty of stage experience, was the first real break with the comic tradition in two decades.

My take: the Academy loved Jackman. They liked having a real movie star up there. They found him charming and charismatic. They didn’t even mind his bloated song-and-dance number with Beyonce. (Go figure.)

I think that there’s a sense within the organization that the standup-comic route is played out. That it’s time to put movie stars on the Kodak stage, not guys who are best known for TV shows or HBO specials. That charm and charisma will get you further with the Oscar audience than killer punchlines. That we’ve had it with acerbic outsiders’ takes on Hollywood.

If I’m right, that makes it hard for people like Conan O’Brien. Maybe they could get away with Tina Fey, because at least she wrote a movie, “Mean Girls,” and has acted in a few films. Maybe.

But more likely, they’ll want a star. With a TV-heavy pedigree and no real hit movies on his resume, Gervais would be a stretch, albeit a relatively fresh choice. Streep probably wouldn’t be interested, almost certainly not in a year in which she’ll be a best-actress nominee. Izzard’s too British and too obscure.

Harris would be exactly what the Academy wants, if only he were a movie star. But he’s not. And he’d make it look as if the Oscars were following the other shows he's capably hosted, the Emmys and the Tonys, which is not a perception the Biggest Awards Show of All wants to foster.

Griffin’s too mean. Maher’s too political. Spacey could certainly handle the gig, but does his movie career have any heat these days? And among past hosts, Crystal may be the gold standard, but he's a direct link to Oscar’s past, not its future.

At a time when the Academy clearly wants to follow through on the changes made by Bill Condon and Lawrence Mark at the last Oscars show, I have to think that they’ll be looking for the same kind of host they had in February. I look for the producer to turn to the movie stars with whom he or she has strong relationships, to go in search of the person with the impressive IMDb page rather than the hot Comedy Central show.

The problem is, it’s a fairly small list of stars with the charm and charisma to pull it off – and would, say, Clooney (another likely nominee) or Will Smith really want to venture that far outside his comfort zone for a job in which you could fail on such an epic scale? As an AMPAS governor, Hanks might be more willing, though I hear he’s been reluctant in the past.

When asked about a return engagement, Jackman has said that he hasn’t been asked. My guess is that when a producer is in place, Jackman will be asked – and if he wants to return, the job will be his.