Warning: Spoilers ahead for “Gunpowder Milkshake” on Netflix

“Gunpowder Milkshake” has arrived on Netflix, bringing Karen Gillan’s latest foray into the world of action movies. Here, she’s an assassin named Sam, who ends up on an insane mission to save a little girl. And in the process of doing so, she gets especially inventive when it comes to her weaponry.

Here’s the situation. Sam is an assassin that works for an organization called “The Firm.” She’s only sent for a hit if a person got in particularly bad graces with The Firm, which is how she finds herself hunting down an accountant. He didn’t realize who he was working for, and thus didn’t realize who he was stealing from when he stole money to pay a ransom for his daughter.

When Sam catches up with what’s happening and why he did what he did, she sympathizes. The only problem is, she already shot the guy, so now saving his daughter is up to her. And the methods Sam uses to do so are pretty fun to watch. She gets creative in a fight, so we took notes on the oddest objects she used as a weapon. 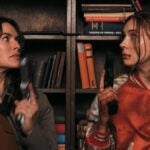 When you’re handing off money as part of a ransom drop, naturally, you have to put it in a suitcase. In the case of “Gunpowder Milkshake,” it was a panda bear one. Why? Who knows. The reasonable assumption would be that since the accountant was exchanging the money for his daughter, the kidnappers used her suitcase for the transfer.

But these kidnappers also wore classic monster masks as disguises. So maybe they were just weird. Either way, the panda came in handy as Sam used it to defend herself from some boneheads sent by The Firm who didn’t want her to try and save the little girl. The extendable handle really saved her from a deadly slice.

Listen, if you’re going to fight goons in a bowling alley, it’s pretty much expected that you use a bowling ball to your advantage. They’re accessible, they’re heavy, and they can do some serious damage. The best part of this one was that Sam used the bowling ball every which way she could. She threw it, she used it as a club, she even literally bowled a guy’s face in. All in all, A+ usage of her surroundings. 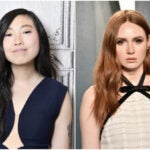 Of all the random objects, Sam picked up as a weapon in this movie, a mop probably made the most sense. And that’s solely because she did the logical thing; she broke it in half and used the pointy end as her weapon. Of course, she then used that pointy end as a literal stake to kill a man wearing a Dracula mask. Because why wouldn’t she?

“Gunpowder Milkshake” had a lot of surprisingly gory moments, but none were quite so funny as when Sam used a giant metal tooth box to crush a man’s skull.

To be fair, she couldn’t use her arms at this point. The doctor in this apparently go-to-hospital-for-assassins betrayed her, injecting her with a toxin that paralyzed her arms (some pretty essential limbs for a gunwoman). So, Sam does what she does best — she improvises.

She tapes her actual weapons to her hands, and when she finds herself sitting on the counter with the high ground, she shoves the giant metal tooth off the edge. It’s brutal, but effective. 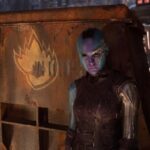 Also Read:
Nebula of ‘Guardians of the Galaxy Vol. 2’ Should Get Her Own Movie (Commentary)

After the big tooth, Sam is able to rely mostly on traditional weapons for the rest of the movie, minus one moment in the library. Because no, in this movie, the library isn’t a library; it’s a front for a weapons vendor, run by Carla Gugino, Michelle Yeoh, and Angela Bassett (bless us all). They hide their products in books.

Unfortunately, Sam doesn’t have time to gear up before a hoard of angry hitmen swarm the library trying to get to her, so she’s left playing book roulette, trying to find something to defend herself with. Among those books is a gold brick, and yes, she uses it to beat the hell out of another goon.

Really, you can almost think of “Gunpowder Milkshake” like a game. See an object, pick it up — it might be surprisingly useful later.