SpikeTV’s “Guys Choice Awards” celebrates its 10th broadcast Thursday night, and the show has a backstage tale of Hollywood legends colliding for every set of golden antlers they’ve awarded.

“This show is a family affair, and it always has been,” Patterson told TheWrap. “The best thing about it is that we wave some new people through occasionally and indoctrinate them. But, generally speaking, it’s a family — Downey, Sam Jackson, Clint, Bob De Niro. It’s their loyalty and their desire to address these audiences directly.”

For its milestone birthday, the show pulled out a heavy artillery to honor Matt Damon and Ben Affleck as “Guys of the Decade”; Julia Roberts, claiming that same honor in its female form; “Casino” and its stars De Niro and Joe Pesci, who were inducted into the Guys Choice Hall of Fame; and James Franco, who took the Virtuoso Award for his numerous artistic endeavors.

“I give a lot of credit to Spike. They’re unafraid. They’re OK with this being what it is, they’re not worried about research and data. They care about the culture of this show,” Patterson said.

Long before Spike as a network would branch out into general entertainment, Patterson and “Guys Choice” offered a calling card to the industry, announcing that the network was capable of two things: creating bold, memorable, live TV and using it to better its core audiences, in Spike’s case, a relentless effort to serve and praise America’s troops.

“Anything that happens in our room is because of honest camaraderie. That’s the way this show makes its moments,” said Patterson.

Not for lack of trying to make a big splash. The franchise has trotted Mel Gibson out on a battle horse, deployed a giant giraffe to nibble from the salad plates of the audience and given Sandra Bullock a memorable platform to recover from “the IED explosion that became my personal life” after a long tabloid saga wth ex-husband Jesse James. “Guys Choice” is not subtle, and no one wants it to be.

“Even this set. ‘Casino’ said no to the Hall of Fame honor, but I built it anyway,” Patterson said of the award show’s green room — a bank vault set with fake $100 bill wallpaper and piles of faux cash sitting on platforms just waiting for the likes of honorees Olivia Munn and Gigi Hadid to pose with and post to Instagram.

“‘Casino’ was our personal ‘Field of Dreams’ — if we built it they would come,” she said.

Indeed, De Niro and Pesci were right at home on the Sony lot where the show was taped last weekend, as the former texted on a Motorola flip phone in between chats with Eastwood — who remained backstage for hours as an unofficial ambassador. 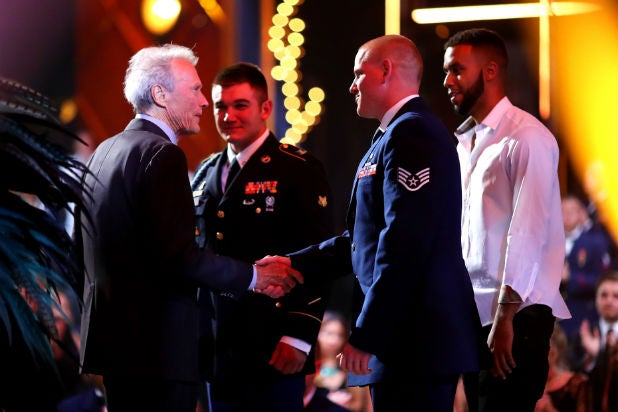 “There were a lot of new people to the show this year, and Clint was happy to tell them who we are,” said Patterson, who honored service men from each military branch on stage.

Roberts was another pipe dream that finally came true, and she brought her friends and former costars (“her boys,” as Julia called them backstage) to present to her: Dermot Mulroney from their classic “My Best Friend’s Wedding” and Matt Bomer from HBO’s “The Normal Heart.” Patterson also hired the Gay Men’s Choir of Los Angeles to sing her onto the stage through a formation of showgirls raising their long legs.

“I’ve stumbled into a Fellini film,” Roberts said in her acceptance speech.

With a show like this, there are bound to be a few that get away. After a 2010 scandal involving football player Brett Favre texting a reporter photos of his genitals, “SNL” director and “Guys Choice” producer Beth McCarthy-Miller wrote a sketch where an EPSN anchor interviews the athlete’s penis.

“Nick Swardson played the penis. Brian Unger played the anchor. It was brilliant, but it never ran,” Patterson said.

Plenty of other outlandish things have made it to air, Patterson recalled, like the 2012 bit “Dick Stopper, an alternative to Kickstarter that encouraged Michael Fassbender to never show his penis again, as a favor to other men.” For what it’s worth, the world hasn’t seen it since.

There’s also a few names who haven’t made their way to the party.

“We really wanted to reach out to some of the moguls of Silicon Valley, because we want to honor the guys trying to change the world — a Mark Zuckerberg or Bill Gates. That’s the kind of show we are, too. We’ll have Chris Pratt but also Buzz Aldrin,” said Patterson. “But like I said, it takes a little bit to get indoctrinated.”

Take heed, Gates and Zuckerberg — Clint Eastwood is in the green room waiting for you.

Viacom’s male-skewing network is broadening its slate with ”Lip Sync Battle,“ the miniseries ”Tut“ and other new scripted and reality shows