This review of “Halloween Kills” was first published September 8 after the film’s premiere at the Venice Film Festival.

Michael Myers has been stabbed, shot, hacked and chainsawed in “Halloween” (1978), “Halloween II” (1981), and “Halloween” (2018). What more can OG Final Girl Laurie Strode (Jamie Lee Curtis) do to stop him? It seems he is invincible, which is the central conceit of “Halloween Kills,” fleshing out the never-ending battle between Michael and Laurie, who at this point could file for a restraining order.

“Halloween Kills” is the twelfth installment in the franchise, and it’s a shockingly realistic one. Laurie’s been stalked by Michael for 53 years, which means any spark of normalcy has been dampened by a hailstorm of knives, masks, cloaks and jump scares. As we learned in David Gordon Green’s recent sequel, Laurie has become a doomsday prepper on steroids — locked, loaded, with enough ammo to take out a small army.

The franchise has always posited Michael as the insane one, but after decades of trauma, it’s Laurie’s turn to match his madness — he’s the abyss, she’s the gazer — a character shift that works thanks to Green’s knack for taking the material seriously, to say nothing of Curtis’ adaptability. 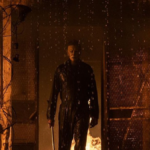 At the end of Green’s “Halloween”, Michael was supposedly burned alive in Laurie’s basement as she escaped into the night. Along with daughter Karen (Judy Greer) and granddaughter Allyson (Andi Matichack), Laurie is now resting in a hospital bed outside of town. But Michael doesn’t stay down for long.

He rips into the first responders at the scene of the crime, blood spewing across a somber, starless sky. Michael then heads to his childhood home in Haddonfield, while Green piles on the viscera at an alarming rate. The “Halloween” films have increasingly shied away from the dread-filled, autumn-hued suspense of John Carpenter’s original, trading bare-knuckled tension for bare-knuckled action, which makes for some eye-covering moments but also some overly gruesome beheadings of the was-that-really-necessary variety.

Green brings back a murder’s row of characters from the ’70s “Halloween,” including Lindsey (Kyle Richards reprises her role), the little girl Laurie babysat; her friend Tommy (Anthony Michael Hall); and nurse Marion (Nancy Stephens). It provides a way to explore how Michael impacted their lives emotionally and mentally, while also giving Michael more bodies to puncture via kitchen knife. Bodies pile up faster than ever, prompting an angry mob that careens through the suburban streets before they run into his lumbering, masked physique.

Armed with knives, pitchforks and baseball bats, they put together a plan that only horror movie characters would be dumb enough to make, splitting up into groups. Allyson sets out with boyfriend Cameron (Dylan Arnold), while Tommy teams up with Lindsey. Laurie, meanwhile, braces for the possibility that Michael will come to her. She knows he’s going to find her; it’s just a matter of when and where. And if all that weren’t enough, a dozen or so newbies are introduced for no other reason than to get slaughtered in a back-alley bloodbath. 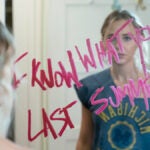 But “Halloween Kills” is no mere gore-fest — it’s about the generational trauma bestowed upon Haddonfield. The action sequences are more than just action sequences; in Green’s social allegory, they are a way for citizens to confront their trauma, their rage, their oppression, and to reclaim their power and agency through revenge. We see Haddonfield not just as a victim of a masked assailant, but also a victim of larger forces who will stop at nothing to dehumanize their community.

For all the deep and troubling psychoanalysis of this film, it’s also a textbook “Halloween” movie. Curtis remains the perfect Final Girl, showcasing a range of emotions in a single frame: tired, resilient, resourceful and terrified. The film is expertly shot by returning cinematographer Michael Simmonds, who crafts some memorably chilling images, highly stylized and dimly lit. Carpenter’s score (composed in collaboration with his son Cody Carpenter) offers some of the franchise’s Greatest Hits with a couple remixes thrown in to catch you off guard.

Green seems less interested in rewriting the “Halloween” playbook than in giving audiences what they came for, from ghastly scares to a ghoulish score. It’s a strategy that promises to make the series as immortal as Michael Myers himself.