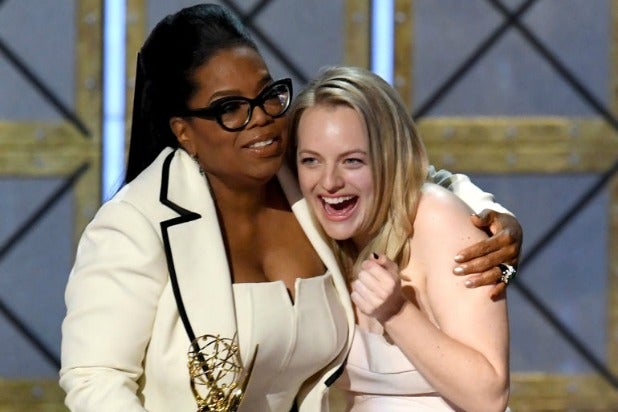 On Sunday, Hulu became the first streaming service ever to win the Emmy Award for Outstanding Drama Series, thanks to Elisabeth Moss’ excellent “The Handmaid’s Tale.” Last night also marked the latest that Original Content chief Craig Erwich has stayed out in a decade, he told TheWrap. Hey man, you earned it.

We wrangled Hollywood’s (suddenly) most back-slapped television executive for 15 minutes Monday afternoon, and really pestered the tired fella to quantify — or at least, qualify — what this landmark win means for his company.

While Erwich (rightfully) maintained that Hulu was already on the TV landscape’s map ahead of last night, the head honcho allowed that this Emmy thing “might create a larger footprint on the map.”

“The Emmys are world-renowned as validating of your strategy, so that is very meaningful,” he told us.

Especially since Hulu improbably beat league-leader Netflix to such a close-the-show moment, right?

“We really don’t think about it in terms of ‘we beat Netflix,'” he replied to exactly that question. “The competition was so intense last night. I went to the Creative Arts Emmys last week, and every category — I said to someone, ‘It’s like a Quentin Tarantino movie… everyone pulls out a gun.’ There’s no weak links in the nominations.”

OK, fine, so you’re not gonna rub this one in. Be gracious, if you have to.

Ignoring the competition for the rest of our conversation, this reporter really wanted Erwich to predict how much one big flag-planting win could impact Hulu’s subscriber tally, hard numbers that are more valuable than hardware — even the gold-and-black shiny kind.

“We really do think about each of these shows as, hopefully, like — this might be an unfortunate term — a gateway drug to the rest of Hulu,” he said. “The real goal is that they come in to watch ‘Handmaid’s’ and then discover a lot of other shows.”

And that is kind of exactly what “The Handmaid’s Tale” already did for “Harlots,” the latter of which was “not necessarily the biggest show,” in Erwich’s words. Still, the two proved simpatico in terms of audience demos, and the litter sister series piggybacked nicely off of the established and buzzy hit. Replicate that a couple dozen times and you’ve got something.

“We were able to get a lot of people to sample the show and watch the show because of ‘Handmaid’s Tale,'” Erwich explained. “That’s really how you use these things to grow.'”

Also Read: Female-Fronted Shows Crushed It at the Emmys

That’s all well and good, but answer the question, dawg. Is Hulu going to have a material day in terms of newbies pledging you their $7.99/month?

“I anticipate that we’ll have a good day in terms of subscribers,” Erwich relented. “But you have to do that 364 [more] days of the year.”

Thanks! We have our headline. Check out Hulu’s (and everyone else’s) big wins here.