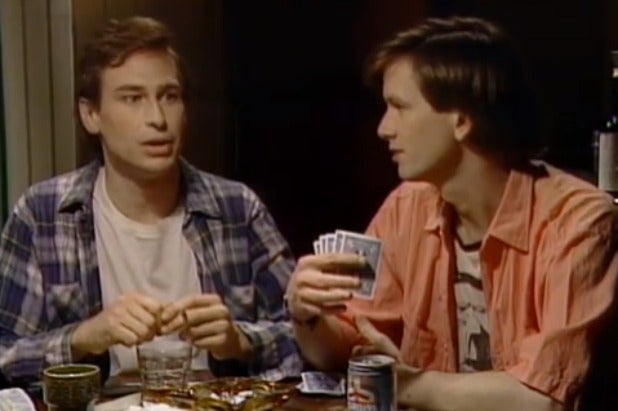 Happy Canada Day, a celebration of the country that brought us one of the world’s great sketch groups, The Kids in the Hall.

Canada is known for other things, too: Gordon Lightfoot, maple syrup, Wayne Gretzky, and being nice. But on this Canada Day we celebrate its rich comedic legacy, which includes “SCTV,” some of the greatest “Saturday Night Live” players, and the glorious Kids.

Also read: Game of Clones: ‘Game of Thrones’ Characters and Their Doppelgängers, Including ‘Kids in the Hall’ Star Kevin McDonald (Photos)

We could talk about how they formed a bridge between Monty Python and the absurdist comedy of today, or mastered the slow burn, or influenced the brilliant “Mr. Show.” We could give thanks that they’re still going strong. Or we could just let their great work speak for itself.

Wait: Are we just using Canada Day as an excuse to re-enjoy some of our favorite Kids sketches? Yes, we are.

“Womyn”
A classic Kids sketch about macho guys getting in touch with their feminine sides. Often playing female characters, the Kids were always playing to a more enlightened warehouse.

Flying Pig
The Kids thrive at characters who tend toward the grotesque, including Mark McKinney’s infamous Chicken Lady. Bruce McCulloch’s flying pig was a departure — because he was unapologetically adorable. You can see how he would improve any line-up.

McGuillicutty & Green
Comic disassemblage at its finest, courtesy of Kevin McDonald and Dave Foley. If you’re the type who likes trying to understand how jokes work, Foley’s turn as the world’s worst straightman may hit a little close to home.

Cyril St. John
The Kids have never seemed as interested in parody as in building characters, but in this, arguably their masterpiece, they do both.

Bonus: Lonely Sarcastic Guy
How many times have you seen this sketch reworked? It’s probably because it’s sooooooo great. There’s just nothing we’d rather do than watch it for the millionth time.