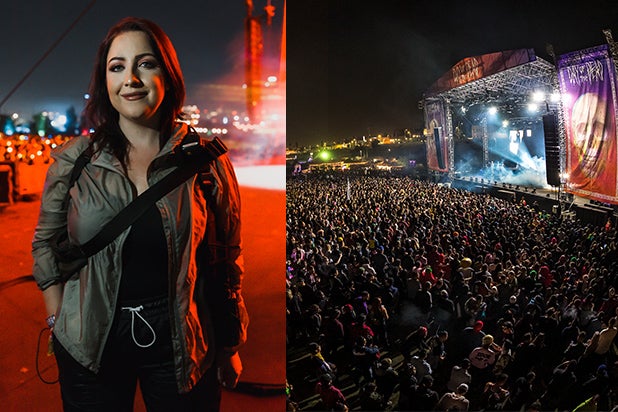 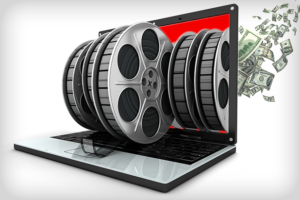 Meg Deschenes and the scene at HARD Day of the Dead 2019. (Photos by: Virisa Yong, Drew Ressler for Rukes)

”We’ve learned that most of our audience, the younger crowd, they’re not using Spotify. They’re on YouTube,“ says Meagan DesChenes, the promoter leading the electronic and hip-hop festival brand

How do you book an EDM festival at a time when hip-hop seems to dominate the music scene?

For Meagan DesChenes, the director of Insomniac’s HARD festivals, setting a lineup for this month’s one-day HARD Day of the Dead festival at the L.A. State Historic Park had less to do with responding to what’s on trend than serving her community of music fans.

“We notice that even when we book a little of both (electronic and hip-hop), the electronic music still wins” in terms of crowd size and guest engagement, DesChenes said, seated backstage at the Nov. 2 event among candy-filled sombreros and a strolling mariachi.

The challenges for electronic music circa 2019 are acute. There isn’t a single EDM song on the Spotify U.S. Top 50 chart right now, while hip-hop artists claim 34 of those spots. Meanwhile in Las Vegas, KAOS, the newest DJ-driven megaclub abruptly closed last week after just seven months, with owners citing high talent costs as a cause. (They dropped superstar Marshmello’s $60 million multiyear deal shortly before shutting down, according to the Las Vegas Review-Journal.)

But DesChenes remains undaunted by the rise of hip-hop and the glut of electronic offerings in the L.A. market — including four consecutive weekends of competing outdoor, multi-stage, EDM festivals in October and early November. Each drew thousands of fans with mutually exclusive lineups of house, techno, mainstream EDM or a dash of headliner-level talent, like Diplo and Deadmau5.

For her event, which fell last in the four-week cycle, DesChenes booked Skrillex’s side-project “Dog Blood” and Coachella alums like Elohim, Zhu and the Martinez Brothers.

So how does DesChenes, one of the only women leading an established festival brand in the U.S. besides Stagecoach chief Stacy Vee, find the right balance for her program?

“Honestly, I personally listen to the music. I don’t always book what I like because I don’t have the same taste as an 18-year-old. But, I’ll go to an artist’s Instagram page because I like people to have a good personality and talk to their fans. I love that,” she said. “When I look at an artist and I see they post videos that get a lot of comments and they’re constantly interacting with their fans, I love that. Some artists will just come and play, and they are dead on socials. I don’t find that very attractive.”

While agents and managers pitch an artist’s streaming numbers, that’s not the decisive metric for DesChenes to determine if she will make an offer. “It’s always hard to gauge an artist just on Spotify. We get that all the time when we’re booking our shows — ‘He has this many streams’  — but people listen to music on all different platforms. We’ve learned that most of our audience, the younger crowd, they’re not using Spotify, to be honest with you. They’re on YouTube, literally. That’s where they’re streaming their music — on YouTube.”

To be clear, fans are listening to videos for free on YouTube’s video platforms, not on YouTube’s audio-only music app.

DesChenes said she and her two-person team like to dig into a DJ’s track record on so-called “hard ticket” shows — dates where the artist headlines as the draw without the cushion of a festival or a Vegas casino. When fans have to pry themselves away from a streaming service, leave their homes and buy a ticket specifically for that artist, it’s a leading indicator of their draw.

“It’s always streams, but the other metric is how many tickets the artist sold in a market, especially if it’s L.A.,” she said, noting that the team at parent company Insomniac “are out everywhere” and report back on how crowded various shows are.

While her team also looks at data from their own festival apps to see how many times fans “favorite” or “schedule” an artist, DesChenes said she also steps away from the quantitative moneyball approach to building a lineup and also relies on an analog toolkit of relationships and gut intuition.

“I have some of my favorites that I book on Hard that aren’t massive, but are people that I just like,” she said. “Born Dirty has been around for a long time. I always have him on Hard. He’s just a really good DJ and I know when I book him he’s going to play really well.”

Electric Daisy Carnival 2019 will be remembered for its muscular production design, Vegas’ cooler May weather, and a walked-back evacuation order that cut a night short

As 150,000 dance music fans, 240 artists, and a week of shoulder events across Las Vegas wind down from the 2019 Electric Daisy Carnival, we note the highlights (the return of Skrillex and a full embrace of Idris Elba) and missteps.