The opening credits of “Hardcore Henry” act as a kind of old-fashioned musical overture, offering a brief taste of what’s to come. Discrete, point-of-impact moments of violence parade across the screen in lovingly detailed close-up: A fist meets a face, a knife penetrates a neck, a bullet takes a journey to the center of a skull, all of it stretched out for consumption in luxurious slow-motion.

That slow-mo is a lie, though, because the next 90 minutes of this gauntlet-hurling debut feature from music video director Ilya Naishuller — a sci-fi-action-splatter-jolt told from a frenzied, first-person point of view — is the movie-going equivalent of riding “The Vominator” at a knockoff Soviet Six Flags.

Its star is no star at all. Henry, the closing credits explain, is played by “additional cameramen.” The audience experiences the action through his eyes, glimpsing his machine-like hands as they crush the life out of all comers, but Henry remains unseen and largely unknown. He awakens from the aftermath of mysterious destruction, his limbs missing, his scientist wife Estelle (Haley Bennett, “The Equalizer”) fitting him with advanced tech prosthetics and some insta-grafted skin.

Henry has no memory, no understanding of what percentage cyborg he is now, and only a vague emotional connection to the woman in front of him. So when a shady Russian named Akan (Danila Kozlovsky, “Vampire Academy”) with telekinetic ability arrives with a gun squad in tow and kidnaps Estelle, Henry lunges into action for no better reasons than that he can and thinks he should.

Akan’s plans are delivered with the barest of explanation. They involve controlling everything in the world, of course, and to that end he employs an army of robot soldiers and a series of gestures modeled on a Crispin Glover-style playbook for Really Weird Dudes. Henry, in response, has to race through a Moscow obstacle course, destroying an endless succession of advancing enemies. (Comparisons of “Hardcore Henry” to first-person-shooter video games will be cliché by the time the opening weekend box office tallies appear.) In this series of tasks, he’s guided by Jimmy (Sharlto Copley, “Chappie”), an arch, absurdist cartoon of a man who has a habit of getting himself killed over and over. 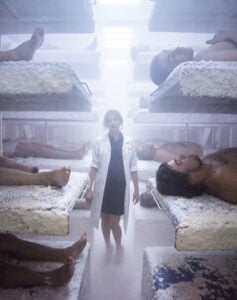 What’s it all mean? The script from Naishuller and Will Stewart (whose sole prior feature writing credit is the 2005 Casper Van Dien TV movie “Premonition”) holds back, way back, on plot details and characterization, choosing mayhem and gut-shredding chaos as organizing principles. Human beings are the least of the film’s concerns, unless they can be obliterated or exploded in ways that will make an audience roar with gleeful bloodlust. The speeding, nausea-inducing camera pauses only long enough to drink in the coolness of the many practical gore effects.

Naishuller is indebted to a variety of sources, not least of which is 1947’s first-person noir, “Lady in the Lake.” If you happen to be looking off screen for a moment at a fixed spot in the theater in the hopes of getting your seated equilibrium back, you’ll miss a poster for that film on a wall as Henry sprints past. Other reference points include a certain gang of black-suited Tarantino characters (and Tim Roth appears briefly in flashback as Henry’s father), “The Magnificent Seven,” “Run Lola Run,” “The Raid,” and the world’s entire stockpile of cocaine.

Does Naishuller know how to tell a real story or does he assemble sensations? The evidence for the former is in short supply here. In fact, it’s in the dispensing of information that the film stalls and sputters. Presented with a moral universe where annihilation is all, it’s difficult to invest in the film as anything more significant than a breathless series of punishing vignettes.

Taken as such, “Hardcore Henry” works best when it un-self-consciously indulges in its own juvenile daydream of badass murder, when the decapitations, flame-throwers, wild horses, phallic baseball bats, intentionally jumbled subtitles, Brutalist architecture, disco ball outfits, self-surgery, machine guns, and tanks fly freely across the screen. Its bad men doing bad things aren’t really doing anything at all; they’re just meat puppets that mangle and are mangled back. Their collective trip to hell is death tourism for the viewer; its sole, genuine feeling the one of relief that comes when it’s over.