Boba Fett’s iconic space ship has been a part of “Star Wars” lore almost as long as Boba Fett has — you’ll recognize it as the unique ship the bounty hunter escaped with frozen-in-carbonite Han Solo in “The Empire Strikes Back,” which we learned in “Attack of the Clones” that he inherited from his dad/clone gene source Jango Fett.

And ever since its debut in 1980 it’s been known in “Star Wars” media and toys as “Slave-1.” But it looks like fans are going to have to get used to calling it something a lot more generic than that moving forward. Because over the weekend, Lego revealed three new “Stars Wars” playsets, one of them based on Slave 1. The kicker is the new toy is now known, rather blandly, as “Boba Fett’s Starship.”

Fan site Jedi News, which first reported the news, spoke with LEGO designers Jens Kronvold Frederiksen and Michael Lee Stockwell, who confirmed the name was changed at the behest of Disney. 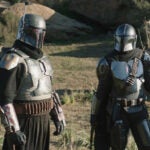 “Everybody is (dropping the Slave 1 name),” added Frederiksen. “It’s probably not something which has been announced publicly but it is just something that Disney doesn’t want to use any more.”

Slave 1 was most recently seen in the second season of “The Mandalorian” and is assumed to be present in upcoming Disney+ show “The Book of Boba Fett.” Though presumably it’ll be “Boba Fett’s space ship” or, when he’s talking, “my space ship.” Cool.

Representatives for Disney and Lucasfilm did not respond to TheWrap’s request for comment.