Why hello there. No doubt you’re here because you’ve watched the second episode of “Hawkeye” on Disney+ and might be a bit confused by that last scene. We get it, that was a pretty weird, and pretty abrupt way to end the episode.

So what the hell happened? And who was that at the end of the episode? We have answers. Read on.

A Callback to Natasha Romanoff

A brief recap: In episode 2, Hawkeye (Jeremy Renner) allows himself to be captured by the Track Suit Mafia — “A little catch and release” he tells his wife Laura (Linda Cardellini), who of course reminds him (and the audience) that it’s one of Natasha’s signature moves. Remember her introduction in “The Avengers”? Clint is trying to do the same thing here.

Just before they move him to their warehouse/hideout, one of the Track Suit bros mentions a “She” who has ordered them to bring Hawkeye in alive. Later on at the warehouse, the Track Suit bros think they’re interrogating Hawkeye, unaware that he’s pumping them for information and clearly intends to breeze on out of there the second he gets what he’s after.

Unfortunately Kate Bishop (Hailee Steinfeld), who isn’t a trained S.H.I.E.L.D. agent and doesn’t think like a spy, assumes Hawkeye is in legitimate danger. And her attempt to rescue him ends up getting them both captured for real. Whoops.

Cut to an office somewhere else in the warehouse. We hear loud, pounding music and see disorienting, dark red light. In the office is a woman with a trancelike look on her face, placing her hands on a speaker and feeling the vibrations of the bass. Presumably this is the “She” we mentioned earlier.

At the office door, one of the Track Suit bros is trying to talk to her; however, we see this from her point of view and for some reason (we’ll get to why in a second), we can’t actually hear what he’s saying. Then, the credits. Like we said, it’s really abrupt.

So who is she? Someone you’re going to be seeing a lot of. Her name is Maya Lopez but she’s better known as the superhero Echo, and in “Hawkeye” she’s played by Alaqua Cox.

Created by David Mack and Joe Quesada in 1999, Echo is a Native American woman with advanced martial arts training who also happens to be one of a very few deaf comic book heroes. (Something she has in common with Clint Barton, who in the comics and the Marvel Cinematic Universe has severely damaged hearing and wears a hearing aid.) She’s also known for the distinctive face paint she wears as part of her Echo uniform: A white handprint stretching from the right side of her jaw to the left side of her forehead.

She also has a superpower called “photographic reflexes,” which means she can mimic any physical movement she sees. If that sounds familiar, it should: The villain Taskmaster, introduced to the MCU in “Black Widow ” has the same superpower.

Maya wasn’t a villain like Taskmaster, however. Having been manipulated into villainy in her first appearances by her adopted father, Wilson Fisk — as in, Daredevil’s arch enemy, the Kingpin — once she discovered the truth, she turned heroic.

Since then she’s been though a lot. For instance, she’s been killed and brought back to life twice. She’s also been involved with some of the major Marvel Comics events like Civil War and Secret Invasion. And she’s teamed up with heroes like Moon Knight. And as of 2021, she’s the new host for the cosmic Phoenix entity.

More relevantly for “Hawkeye,” in the comics Maya was the first hero to take the name “Ronin,” and in fact, in a 2007 “New Avengers” storyline, she gave Clint Barton permission to operate under that identity in the first place.

Echo in the MCU

The MCU version of Echo, played by Alaqua Cox, will likely differ in significant ways from the comics. For one thing, it’s obvious Clint Barton was that universe’s first Ronin. And while we’d be delighted if Vincent D’Onofrio showed up to once again play Wilson Fisk, we seriously doubt that’s going to happen.

But Marvel tends to loosely adapt plots and characters for the MCU. And fortunately, one thing that won’t be changed is Echo’s hearing. She’ll be deaf in the MCU just like she is in the comics.

It’s not clear how large a role she’ll play in “Hawkeye,” but it’s likely to be more than a cameo. Marvel announced this month that a Disney+ “Echo” series featuring Cox is under way, with Marion Dayre serving as head writer. Given that shows based on “Moon Knight” and “Secret Invasion” are also in the works, we have a feeling Echo is going to be a big player in the MCU’s Phase 4. 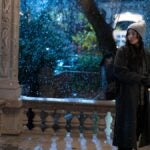