After last week’s action packed episode of “Hawkeye,” things have slowed down considerably in this little corner of the MCU. Not that this week’s episode wasn’t equally wonderful, it was just much more of a hangout episode (with a shorter running time even). Put another way, if last week’s episode was “Die Hard,” this week’s is “Dazed and Confused.” Still, there’s a lot to discuss — including the return of a new fan-favorite MCU character. So, without further ado, let’s get into it!

We open where last week left off, with Jack (Tony Dalton, whose smarmy, off kilter deliciousness increases with each of his appearances) holding a sword to Clint’s neck. The moment, played for maximum dramatic impact at the conclusion of the last episode, is quickly diffused with patented Marvel humor. Eleanor (Vera Farmiga) walks in on the brouhaha and asks, “Why is there an Avenger in my dining room?” After some additional banter (Kate brings up Clint’s “branding issue”), there is some discussion about what exactly Hawkeye is doing. Kate suggests that she’s helping him with a case. She also calls him “CB1” which is hilarious and adorable.

Eleanor, however is displeased, walks Clint to the elevator, and he promises to keep her out of harm’s way. Jeremy Renner’s performance in this scene, and throughout this episode, is incredibly emotive and underplayed, and he continues to give a character depth and dimension that he was never afforded in any of the feature films. (It’s enough to be retroactively frustrated by his appearance in the earlier films; we could have been getting so much more!) Clint texts his wife to ask for help looking up Sloan. He has also subtly stolen the Ronin sword back from Jack. Huzzah! 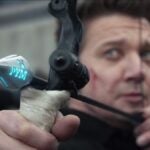 There is one potentially interesting (but, full disclosure, could easily be totally off-the-mark) concept that is introduced in the scene – Jack can be seen sipping from a coffee cup that is emblazoned with hexagons. Later in the episode he’s sitting in a chair patterned with the same shape. “WandaVision” has taught us to be very suspicious of hexagons; it was associated with both the enchanted world that Wanda (Elizabeth Olsen) conjured and also the secret organization S.W.O.R.D. Now, hear me out: in the comic books Jack is known as the Swordsman. What if he’s not the Swordsman in “Hawkeye” but rather the S.W.O.R.D.sman. Think about it! We’re through the looking glass here people!

Anyway, Eleanor is seen making a phone call to a mysterious, off-screen presence. She says the situation is “urgent.”

On the street outside of Eleanor’s penthouse, Clint chats with his wife (the great Linda Cardellini). She tells him that Jack is actually the CEO of a company responsible for laundering money for the Tracksuit Mafia. She also asks him about the Rolex that was stolen from the weird rich guy auction, and speaks in another language to hide things from the kids. For so long Laura has been seen as a supportive wife but one that would rather Hawkeye leave the capering long enough to be the husband and father their family deserves. What this scene suggests is that maybe she was a more integral part of his missions than we previously imagined. And that shading adds so much to her character and their relationship. She tells him to go sleep it off and to ice his wounds.

Back in Eleanor’s penthouse, she complains about how Kate has always been obsessed with Hawkeye. Eleanor and Jack dance. Kate is unamused. Also, and this cannot be stressed enough, nobody has asked about the weird one-eyed dog who is more obsessed with pizza than all four Teenage Mutant Ninja Turtles combined. It’s lounging on some super expensive furniture but nobody bats an eye!

Anyway, Eleanor asks Kate about helping with the security firm’s upcoming Christmas party. So look out for that Christmas party to be the setting for large scale mayhem before the season is up. We’d bet our collection of trick arrows on it.

Back at Kate’s aunt’s shabby chic apartment (she really is on vacation!), Clint gets some frozen daiquiri mix from the freezer and uses it to ice down his bruises. One of the episode’s best visual gags is him reclining in a crummy lazy boy, the cocktail mixes affixed to different parts of his body.

His peace is shattered with Kate and the pizza dog arrive (with pizza). Kate is attempting to inject their interaction with “holiday cheer.” “This is supposed to be movie marathon night?” she asks. She hands Clint an ugly Christmas sweater, they put up the tree, “It’s a Wonderful Life” plays warmly on the very old school television set. Crucially Clint demonstrates his ability to turn anything into a deadly weapon with startling accuracy by tossing a little ornament at the television to turn it off. He then teaches Kate this trick. Again: this will come back by the end of the season – possibly during the swanky Christmas party.

The jovial Christmas fun turns serious when Kate asks Clint what the best shot he ever took was. “The one I didn’t take,” he says solemnly. He tells her about how he was assigned to take out a target but once he got there, she seemed like she was dying to get out. Kate asks if he is talking about Natasha, Clint nods. Kate then asks him about the Blip and he tries to downplay the devastation he felt when his entire family was turned to ash. “Is that where you met Ronin?” she asks. But she knows, and he acknowledges: he was Ronin. She tries to encourage him to accept his inner hero, but he says he’s a weapon.

Kate and the dog go to bed and Clint stays behind. As he drifts off to sleep he has flashbacks of his time as Ronin (to a killing spree that we’ve never seen before) and to losing Natasha on that godforsaken planet (which we have seen, in “Avengers: Endgame”). This episode is heavy on the playful banter, and Hailee Steinfeld and Renner are excellent at it. But there’s also a deep sadness to the Hawkeye character that comes out in moments like this and makes all the fun that much more meaningful.

The next morning the dynamic duo split up: Clint tasks Kate with interfacing with the LARPers and retrieving a bag of trick arrows that are currently in NYPD custody. She goes to the park with Pizza Dog and it’s adorable.

Meanwhile, Clint interrogates Kazi (Fra Free), who gives him an intellectual dressing down while Kazi fidgets (Clint has taken away all of his weapons). Clint wants out of the City and, as he says, “I don’t want anybody else to die.” There are more veiled references to the “big man” (who we can almost guarantee is Vincent D’Onofrio’s Kingpin) and a nice, tense crime movie vibe to the whole scene. 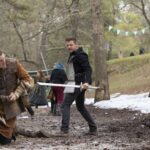 Clint meets up with Kate and the LARPers. They want materials for new costumes, and Kate suggests that they make a couple of new costumes for them. While they’re with the LARPers, Clint gets a text message from Kate. She knows where the Rolex is. At the end of the LARPer interlude, the LARP cop gives Hawkeye his bag of trick arrows. Only it’s her bag. “My wife gave me this bag,” the lady cop says, introducing some more marginal LGBTQ characters into the MCU. Hey, at this point we’ll take it.

We then cut to a rooftop at night. Kate and Clint are across the street from the apartment where his watch is hidden. As Clint is laying out his plans for a stealthy entrance, Kate disappears. She walks across the street and helps an old man with his groceries. While they’re in the elevator she tells him “I was talking to an Avenger.” Her face is priceless. The old man becomes nervous. It’s a wonderful moment and recalls one of this year’s other delightful streaming programs, Hulu’s “Only Murders in the Building.”

When Kate gets into the apartment, she’s greeted by a weird strobe light. She asks Clint (who is still on the opposite rooftop, communicating to her via earpiece) what the watch can do and he says something about it having the ability to give away his friend. Not super sure what that means but it will undoubtedly come back before the close of the season. Kate uncovers a list of Clint’s family and their ages. That’s when they come to a realization at the same time: Kate is inside Maya aka Echo’s apartment. She emerges and drops Kate to the ground. Kate says that Maya is there, to which Clint replies, “Who am I fighting?” Back on the rooftop he’s been engaged by a figure wearing a futuristic nightvision goggle set-up. We know exactly who this is.

Clint fires a grappling arrow across the street and tells Kate to get on the zipline. She jumps on it but gets stuck halfway through. She’s eventually jostled and winds up on the roof, where a lengthy and acrobatic fight scene unfolds between Clint, the mystery figure, Kate, and Maya. It’s all well choreographed and staged; there’s a gap between the buildings which allows for some additional tension. There’s a moment, too, where Kate gets knocked off the roof. Clint thinks she’s gone and looks over the edge like he was looking at Black Widow plummet to her death. Kate is actually connected to a wire and asks to be pulled up but instead Clint cuts her down. It’s too much for him. Clearly there’s no coming back from this emotional near-miss.

Up on the roof, the mystery figure is finally revealed – it’s Yelena Belova (aka Florence Pugh), our favorite character from this summer’s “Black Widow” and, um, a Black Widow. Clint think she’s been hired to kill him. Echo runs off. At the very end of the episode, he tells Kate to go home. “I’m doing this alone,” he says.

And that’s it! Until next week, keep those bows high and those arrows higher! 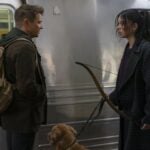 Also Read:
‘Hawkeye': How Kate Bishop’s Hawkeye Fandom Is a Departure From the Comics
x