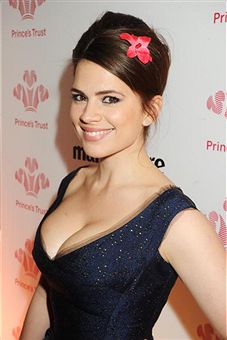 "She’s Out of My League" star Alice Eve was previously considered the front-runner for the role (which Keira Knightley and Emily Blunt were also rumored to be contenders for) but I’m glad that the studio went with Atwell over the current flavor-of-the-month. Atwell has been paying her dues for years and has long been poised for a breakout role of this magnitude. Besides, I think she’s simply a better actress with greater range, not that "Captain America" is "Sophie’s Choice" or anything.

Joe Johnston will direct "Captain America" from a script by Christopher Markus and Stephen McFeely ("The Chronicles of Narnia"). The story will focus on the early days of the Marvel Universe when Steve Rogers volunteers to participate in an experimental program that turns him into the Super Soldier known as Captain America. In the early comics, Peggy fell in love with Cap as as an American spy embedded with the French Resistance while they fought Nazis in World War II together, though the character will be "updated" for the movie, which sounds fairly ominous.

It’s interesting to note that the film’s title has apparently changed. When Marvel confirmed Chris Evans as the title character more than week after it was widely reported online, the studio referred to the film as "The First Avenger: Captain America," which always struck me as odd. Personally, I think Marvel should just go with "Captain America" and trust that the public is aware that an "Avengers" movie featuring several superheroes is on its way courtesy of fanboy favorite Joss Whedon, or fully commit to the crossover title strategy and retile "Thor" as "Thor: The Second or Third Avenger: The Order Really Isn’t That Important."