HBO Max is finally cutting something it can feel good about: Smoking, as in cigars and cigarettes, which have been mysteriously removed from movie posters displayed on the streamer’s title cards.

Fortunately for us, this was done to unintentionally hilarious effect.

Twitter users first noticed the photoshopped-out coffin nails this week, then Vulture verified their authenticity and found more examples – though it also discovered plenty of posters with smoking materials still present. HBO Max had no comment, so no, an explanation will not be forthcoming.

But the disappearing lung darts have certainly created some pretty hilarious “after” images of old-time movie stars who now appear to be … twirling their mustaches? Giving awkward peace signs? Making the letter K in sign language?

There’s Warren Beatty, formerly enjoying a Black & Mild in “McCabe & Mrs. Miller,” now mansplaining about using a correctly sized wagon-wheel hub. Or Paul Newman in “The Life and Times of Judge Roy Bean,” once puffing peacefully on a cigarillo, now signaling to the chef that the sauce is … perfecto!

Vulture also noted de-tobaccofied posters for Wong Kar-wai’s 1995 film “Fallen Engels” and the 1960 Kirk Douglas film “There Was a Crooked Man.” But it found still-burning smokes on several other title cards, like the one held by Jack Nicholson in “The Two Jakes” (1990), or Glenn Ford’s cigarillo in “Cimmaron” (1960). 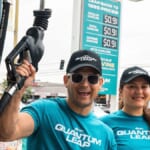 Why some smokes are censored and others are not doesn’t appear to have a clear reason behind it – but then neither do many of the cuts at Warner Bros. Discovery, which recently tossed a $90 million “Batgirl” movie and dozens of HBO Max series into the ashcan.

Perhaps it was a project that was underway – then interrupted when someone figured out that while health consciousness is important, as cost-saving measures go, blotting lit cancer sticks out of movie posters for our amusement was an ineffective strategy.