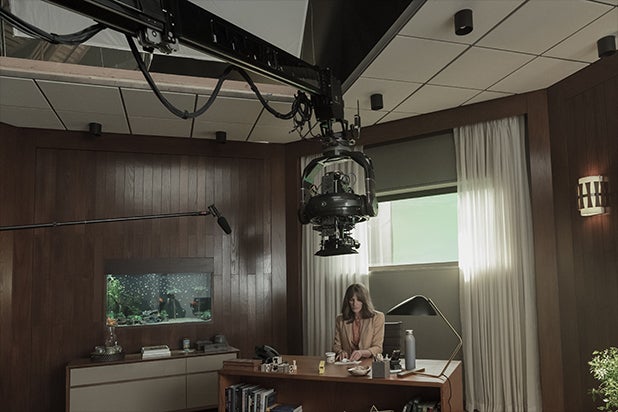 This story about the cinematography of “Homecoming” first appeared in a special section, “The Look,” in the Comedy/Drama/Actors issue of TheWrap’s Emmy Magazine.

The very first thing that creator Sam Esmail said to Tod Campbell about “Homecoming” — maybe even before he asked his longtime cinematographer if he wanted to work on the new Amazon series, Campbell said — was that the first episode would include a lengthy tracking shot that would take viewers through the huge, vaguely sinister facility in which Julia Roberts’ character, Heidi, works.

“He wanted to be able to discover that set and that facility by following her on the phone, to fly over the roof and at some point get close with Heidi, and to introduce some of the characters and then ultimately go outside to the car,” Campbell said. “And from there, it took hundreds of meetings and conversations and blood and sweat and tears.”

The lengthy shot is our introduction to Heidi, a psychologist who’s been hired to work at the Homecoming Transitional Support Center counseling veterans who are returning to civilian life. It involved months of planning even before the set was built, so that its ceiling could be removed to accommodate cameras and the lights could be manipulated even with the ceiling gone.

For shots inside Heidi’s office, Campbell typically opted for largely stationary cameras — but the opening-episode tracking shot starts with a camera positioned over Roberts’ head, which then rises and floats over a ceiling-less building as her character walks through the facility.

The shot begins with an overhead angle taken by a camera on a 73-foot crane that was itself placed on top of a 30-foot platform; the crane then follows Heidi out of her office, down the hall and down the stairs to the second floor, where a dolly takes over. 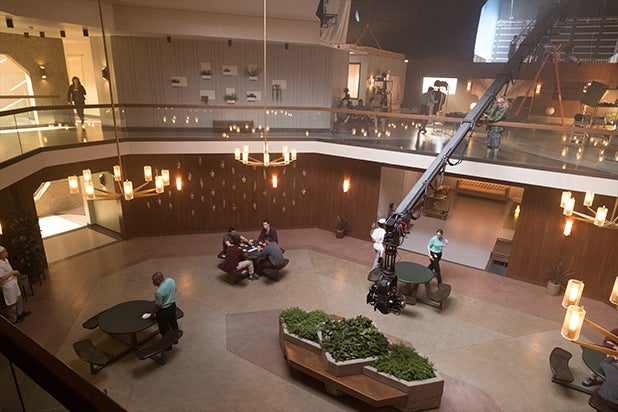 For the building that houses the Homecoming facility, the crew used both a real building and an elaborate set that could be manipulated to allow cranes and dollies to move through the space. In contrast to the minimal camera movement inside the office used by Heidi, Campbell made extensive use of zooming in the rest of the facility.

At one point, he said, the production team cut a hole in the stairway’s handrail so that the dolly could back up onto a platform, which then backed up to follow Heidi. “It was two stitches and a multitude of tools,” he said.

While the tracking shot gives us an extensive tour of Heidi’s work space, it’s a slightly disorienting tour that fits the mood of the show — a thriller and a mystery based on the podcast from Eli Horowitz and Micah Bloomberg. “There are shots and tools so that you’re constantly feeling you don’t have all the information,” Campbell said. “In ‘Homecoming,’ there’s always something beneath the surface that you don’t know. So the shot was designed to show off the entire space without completely letting you get your bearings.”

Campbell also shot sequences set four years in the future, when Heidi is working as a waitress and seemingly doesn’t remember what she did in the lab. For those scenes, the aspect ratio was changed to a square 1:1, and the hard lights of the present-day sequences were changed to softer, dimmer lights. “The biggest challenge,” Campbell said, “was just taking a podcast and turning it into a television show. Sam comes up with things that can be difficult to work out for a cinematographer, but they’re always fun.”

To read more of the Comedy/Drama/Actors issue, click here.