Fans of “High School Musical: The Musical: The Series” have spent the last six months watching star Olivia Rodrigo go from virtual unknown to one of the biggest pop sensations in the country, culminating in a recent visit to the White House to promote COVID-19 vaccines among young people.

Then, as Season 2 of the Disney+ musical dramedy began rolling out this spring, a familiar arc began to unfold on screen with Rodrigo’s character. Over the course of the 12-episode second season, Nini’s emotionally vulnerable songwriting turns her into a viral success, not unlike the way Rodrigo’s debut single, “Driver’s License,” made her one of the buzziest new voices in American pop music earlier this year.

“Sometimes I feel like we should release a date stamp on some of these episodes,” showrunner Tim Federle said in an interview with TheWrap. “Because in reality, we shot that 10 months ago.” 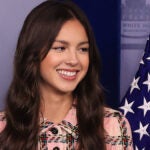 Federle acknowledges the “remarkable similarities” between Nini’s trajectory this season and Rodrigo’s on-screen rise, but he chalks it up to the star’s undeniable talent as a songwriter and performer. “Olivia writes from an incredibly personal place, and for a singer-songwriter, she’s got an unusually powerful and beautiful voice,” Federle said, noting the common “formula” for massively successful artists like Rodrigo and Taylor Swift: “Take a real life experience, add a really powerful image and open up your veins and open up your heart. And people will connect.”

“If I published my diaries growing up, I would have been laughed out of town,” Federle said. “But in this era of TikTok and Instagram and streaming your thoughts and your passions, she emerged at a moment when I think people were ready for that kind of bracing honesty.”

Read more of TheWrap’s interview with Federle about the second season of “High School Musical: The Musical: The Series,” below. 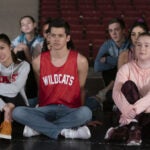 TheWrap: How did you land on this idea of “second chances” as the thematic set-up for the finale?

Federle: There were a number of times in Season 2 where I was like, I’m not sure we’re gonna make it all the way through. Because of COVID. That’s the honest truth. I think that everyone producing television and film pre-vaccine — and in a way even now, post-vaccine, with so much vaccine hesitancy — you have to take stock of what’s actually important, which is keeping the cast and crew safe. So you want to deliver programming that the audience will like, but more importantly, you want the entire cast and crew to walk off the set alive and healthy. I know that’s not the most fun answer. But when we got to the end of Season 2, much of which had been written pre-pandemic, we felt like, you know, what is this all about? Why are we in Utah making this series? And for me, it’s about trying to tell stories from my own high school experience that either didn’t go well or went so well that I wanted to hang on to them forever. Like the experience I had bonding with my theater kid friends, who I keep in touch with to this day. But there’s other things in high school — whether it’s the first breakup, or the first love or the first time you realize maybe you need to leave your hometown to find yourself somewhere else — that are so big and have stayed with me my whole life. I think second chances, metaphorically, was about how life feels so, so big when you’re in high school. You feel like you’ll never get over that breakup, or you feel like you’ll never get over not getting into your dream college. And that is both the least true thing and also the most true thing — those two things exist at the same time. So I think taking these four characters, who in many ways have kind of headed the series, and putting them back in that first episode costume and taking them through the halls that both the actors and the characters had walked a year and a half before when we first started shooting the show — I just thought [that was] powerful imagery and messaging about how life is always about looking back, but trying to also move forward.

How do you see those four characters embodying that idea specifically?

Gina is a character the audience loves — this is what I hear — because she started out as a sort of one-dimensional mean girl, but of course, all mean girls have something else happening underneath the surface. So for Gina, who has finally allowed herself to take down some walls and try to let people in, she is now questioning that because of a miscommunication about this guy who she has a huge crush on. She’s asking herself, “Should I actually have stayed harder? Should I have kept those walls up?” For E.J., he has tried so hard as this prototypical privileged, perfect-on-paper, high school all-star to try something new this year. To ask other people how they’re doing and get out of his own head and recognize that if you want something, you have to go after it rather than protect yourself with bluster. So he’s questioning that, “Did I get this wrong?” I think for Ricky, who is so sentimental and so afraid of change, he’s asking himself if he has opportunities and horizons and new people he’s kept himself closed off to because change is scary. For Nini, she’s reflecting on the fact that she seems to always land on her feet, that when she gets a new opportunity, or when a door closes, she has the luck to generally find her way out of these situations. So even though she’s still getting over a breakup with someone really important to her, she’s also recognizing those new opportunities that are all about her and not about how she’s attached to somebody else. So the four of them are reflecting on those disparate journeys, but they all share the same idea of, maybe I could take a second chance on something or someone else.

Looking at Nini’s storyline this season, it’s hard not to see some parallels with the massive success Olivia’s had this year. Has that informed the show at all?

You know, it sounds like such a glib Hollywood answer, but we make the show in Salt Lake in this extremely small kind of bubble — figuratively and literally, when it comes to COVID. Sometimes I feel like we should release a date stamp on some of these episodes. Because in reality, we shot that 10 months ago. It’s interesting, because Olivia plays this character who has boy drama and then writes about it. And that was true in Season 1 as well, even before “Sour” [Rodrigo’s recently released debut album]. So there are some remarkable similarities there, but … I also think there are certain archetypical experiences of growing up — whether it’s first love or success or first heartbreak — that we write about. And then we happened to have cast some young people who have had extraordinarily public experiences that have those same sort of themes.

It kind of seems like there’s something about this franchise and this brand that is destined to make huge stars. Have you thought at all about why that might be? What is it about “High School Musical” that makes it resonate with people in this way?

It’s such a good question, because I can’t figure out exactly what it is. We don’t have superheroes, we don’t have explosions. We don’t have a CGI budget. And we don’t have particularly interesting locations. We have like, an iconic cafeteria and a group of kids singing and dancing. So the formula there is not particularly sticky in and of itself. But I think that in the original casting of the movies, there was lightning in the bottle. Zac [Efron] and Vanessa [Hudgens] and Ashley [Tisdale], especially, captured something about the moment. And then in casting the series, I was just so new to TV that I was like, “We’re casting real theater kids and mostly high schoolers!” And of course, I painted myself into a corner because, like, try making a TV show starring minors who can only work so many hours a day. But I think there’s something wholesome about the franchise. You know, there’s some hilarious statistic — I think Zac and Vanessa never kiss in the first three movies. I don’t know if that’s true. Maybe they kiss in the third one. But overall it’s really earnest and wholesome. I think you can click onto another streaming platform if you want to watch people doing sort of more scandalous things. … But there’s definitely a quality to this franchise that I’ve luckily inherited, that seems to get a lot of attention.

Having worked with Olivia on a few original songs now, what do you think it is about her songwriting that seems to have connected with people in such a big way?

I’m not sure if it’s because she grew up as a Swiftie who really learned that the formula — which is not to say that everybody knows how to bake with this formula — but the formula is like, take a real life experience, add a really powerful image and open up your veins and open up your heart. And people will connect. But Olivia writes from an incredibly personal place, and for a singer-songwriter, she’s got an unusually powerful and beautiful voice. So there’s a pragmatic element here, which is that Olivia just sings beautifully. And she is so modern and unapologetic. If I published my diaries growing up, I would have been laughed out of town. But in this era of TikTok and Instagram and streaming your thoughts and your passions, she emerged at a moment when I think people were ready for that kind of bracing honesty.

One of the biggest cliffhangers coming out of the finale is Ricky getting lured in by Lily. What do you think about their dynamic and where do you see it going in a potential third season?

You know, Gina sort of started as a mean girl, but Sophia [Wylie, the actress who plays Gina] is so extraordinary that we really wanted to push that and surprise people and show her backstory. With Lily, I wanted a full-on Sharpay. She’s like a chaos agent, which, Lord knows, I grew up with those kids in high school too. You know, my show plays in a fairly small sandbox, which is, at the end of the day, on the Disney platform, so we’re going to be a show about basically good people who go through hard times but ultimately make good decisions. So Lily provided an opportunity for our version of a chaos agent. … Ricky, I think, is a very lost soul. He’s sometimes like a moth to a flame and gets attracted to the brightest thing around him. And I think Lily is somebody who sets things on fire to watch them burn, but doesn’t necessarily have a plan for how she’s going to put it out. So I think something is going to spark there if we get to Season 3. My hope for Ricky is that cooler heads prevail and that he gets some treatment and starts to make better decisions. I think that’s the journey Ricky needs to go on.