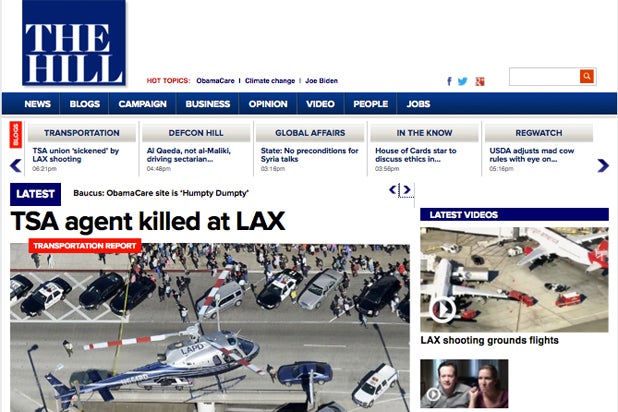 The Hill redesigned its site for the first time in four years this week, premiering a cleaner, simpler and more visual look.

“We are now able to present the stories that we want to promote in a much more forceful way,” Hill editor-in-chief Hugo Gurdon told TheWrap.

The redesign comes following a heightened interest in Washington politics that spurred a bump in traffic for the site, which currently averages between 11 and 16 million unique visitors a month, Gurdon said (Quantcast, which typically skews lower than sites’ internal numbers, says The Hill had 4.67 million unique visits in last 30 days).

As the editor of the 18-year-old publication since 2003, Gurdon said he’s noticed a shift in readership. What was once dedicated to and read by Capitol hill movers and shakers has expanded to cover aspects of federal politics and policy.

Also read: MSNBC.com Chief: ‘Why Would We Want to Look Like the New York Times or the Huffington Post?’

“It was not designed to be broadly appealing in a way that it increasingly is becoming,” Gurdon said.

“The country itself has become much more politically engaged,” he added. “More people are interested in coming to political sites like us.”

That said, Gurdon notes that there is still plenty of interest from The Hill’s original intended audience: “Lawmakers follow The Hill’s Twitter feed more than they follow the Twitter feed of any other publication in the world.”

One new feature of the site that will soon be rolled out, Gurdon said, is that its blog scroll will be tailored to the interests of users based on what they tend to read on the site.

“If a reader is very interested in and always wants to look at defense stories … we’ll make sure that defense is up there,” Gurdon said.

The Hill is part of a crowded field of D.C. and politics-focused outlets, two of which have made big moves recently. Politico is expanding into New York with its acquisition of Capital New York and the Washington Post was recently purchased by Amazon founder Jeff Bezos.

“There clearly is not just one source” for D.C. news, Gurdon said. “We compete by providing really solid, highly-readable but also very solid reporting. We don’t froth things up and we don’t make them dreary. We give people very straightforward direct factual news reporting written in a very entertaining way about a subject more and more people want to read about.”

Now, with the redesign, The Hill can give its expanded readership base the news the way they want it.

“We’re presenting news in a way that more and more people seem to want to consume it,” Gurdon said.