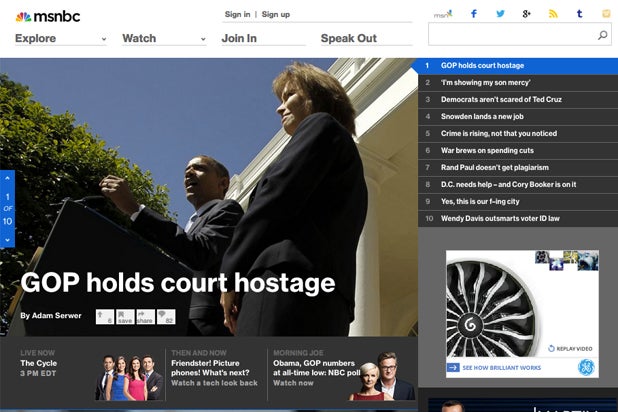 “We really built this as a social network, as a big community gathering point as well as a great content experience around our stories,” MSNBC.com VP and executive editor Richard Wolffe told TheWrap.

In planning the redesign, which was an “ambition of [MSNBC president] Phil Griffin for years,” Wolffe said his team wanted to target the channel’s passionate audience and give them a new way to interact with MSNBC’s shows, stories, and each other.

“We speak to their values and personal identity,” Wolffe said. “They want to be with each other.”

The best way to accomplish that was to rebuild MSNBC.com from scratch and create something truly new.

“We’re a statement of values and identity for our audience, so why would we want to look like the New York Times or the Huffington Post or even NBCNews.com?” Wolffe said.

“The challenge in turning it into a digital space is not to just cut and paste the whole thing, because that’s what publishers have done for 20 years. We wanted to come up with something that was related to, but different from, what you could see on TV.”

The site allows users to create groups centered around any subject they wish – be it show related (“Team Rev” or “Mad for Rachel Maddow”) or a political cause (“Southern Liberal Democrats” or “Obamaholics Anonymous”) – take polls, leave comments and, of course, share items of interest on their other social networks.

Wolffe said Al Sharpton was especially pleased by the “Team Rev” group that had grown around his show.

“Here’s a man who’s spent his life organizing in communities in the real world,” Wolffe said. “And there’s this digital version of what [he’s] been doing. That was very cool.”

The site was built to be optimized for mobile devices with a simple yet intuitive layout that Wolffe wants users to find as easy to navigate as possible.

“We don’t want to say we’re a web extra – ‘here’s a web extra piece of video.’ That’s a really tired and simplistic idea of what people are trying to do online now,” Wolffe said.

It’s still early days for the site, but MSNBC is happy with the interest and engagement it has already generated. Wolffe didn’t provide specific numbers, but said site views and account sign ups far surpassed the benchmarks MSNBC set.

“The traffic has been phenomenal for us,” Wolffe said. Engagement, too: “we’ve signed up 60 percent of the number of people [to the new site than] we had signed up in the past 17 years.”

Though the rollout has had the expected “hitches and bugs,” Wolffe said, it’s been a much smoother process than that of, say, Healthcare.gov.

“I sympathize hugely with anyone launching any website now,” Wolffe said.