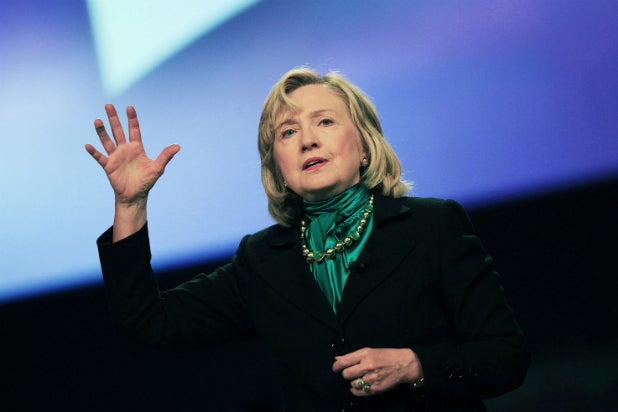 Former Secretary of State Hillary Clinton had some fighting words for Monica Lewinsky at the time of her husband’s scandal, according to a compilation of personal papers by a close Clinton friend, newly released by the Washington Free Beacon.

In a journal entry from Diane Blair, a political scientist and close friend of Clinton’s since the 1970s who died in 2000, the former first lady spoke candidly about President Bill Clinton’s 1998 sex scandal with former White House intern Lewinsky, calling the mistress a “narcissistic loony toon.”

“It was a lapse, but she says to his credit he tried to break it off, tried to pull away, tried to manage someone who was clearly a ‘narcissistic loony toon'; but it was beyond control,” Blair writes.

Blair, a prominent political science professor at the University of Arkansas, bequeathed her personal papers to the school upon her death from lung cancer in 2000, and the archive became open to the public in 2010.

It wasn’t until Sunday that conservative news outlet Washington Free Beacon published a lengthy analysis of what it calls “The Hillary Papers,” which reveal intimate conversations between Clinton and her confidante about Lewinsky, as well as paints a picture of the woman who is widely thought to be frontrunner for the 2016 Democratic presidential nomination.

In an appearance on CNN Monday, Washington Free Beacon writer Alana Goodman said she was afraid there wouldn’t be much new information in Blair’s papers, since the Clintons’ time in office had been widely reported for more than 20 years.

“Honestly [I] didn’t think that there would be much there, because I feel like so much of the Clintons’ especially 1990s-related stuff has been so picked over by reporters,” Goodman said. “But surprisingly there were some interesting things there.”

Goodman said she was tipped off to the existence of the papers by a 2007 report by CNN’s Jake Tapper (then Washington correspondent for ABC News), so she recently decided to check if the archives had opened.

The Lewinsky affair was one of the biggest news stories of the 1990s, and an investigation into the scandal led to the first impeachment of a president since Andrew Johnson in 1868.

In the papers, Clinton also shoulders some of the blame for the affair, saying she had been unaware of just how serious a toll the tremendous pressures of Clinton’s scandal-laced presidency had taken on her husband.

“She is not trying to excuse him; it was a huge personal lapse. And she is not taking responsibility for it,” Blair writes. “But, but, she does say this to put his actions in context. Ever since he took office they’ve been going thru [sic] personal tragedy … and immediately all the ugly forces started making up hateful things about them, pounding on them… She didn’t realize the toll it was taking on him.”

“She thinks she was not smart enough, not sensitive enough, not free enough of her own concerns and struggles to realize the price he was paying,” Blair adds.