Welcome to the latest TV and movie trope: therapists telling professional killers not to kill anymore. It happened in “The Falcon and the Winter Soldier,” and now, it’s happening to Ryan Reynolds in “The Hitman’s Wife’s Bodyguard” — although technically, he’s being told not to bodyguard anymore.

Reynolds returns as Michael Bryce in the sequel to “The Hitman’s Bodyguard,” apparently trying to put his old life behind him. It’s not exactly going well, as he finds himself tangled up once more with Darius Kincaid (Samuel L. Jackson), having been hired to protect Darius’s wife, Sonia (Salma Hayek).

Life as a bodyguard is hard at the best of times, but lest we forget, Bryce is still unlicensed. So not only is he dealing with that, but then comes the pressure of finding out that Darius and Sonia are trying to have a baby. Oh, and also,
per the official synopsis of the film, Bryce and the Kincaids are “all that stand between Europe and a vengeful and powerful madman.” 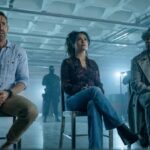 That madman, of course, being Antonion Banderas, who’s hoping to launch a massive cyber-attack. But he’s not the only big name that’s in the “Hitman’s Bodyguard” sequel; Morgan Freeman has joined the cast as well, though the new trailer only shows him briefly, keeping any hints toward his character a secret.

Patrick Hughes is returning to direct the sequel to 2017’s “The Hitman’s Bodyguard,” as is screenwriter Tom O’Connor, who wrote the story and co-wrote the script with Phillip Murphy and Brandon Murphy. The original action-comedy made $176 million worldwide on a $30 million budget.

“The Hitman’s Wife’s Bodyguard” opens in theaters and IMAX on June 16. You can watch the full trailer above.