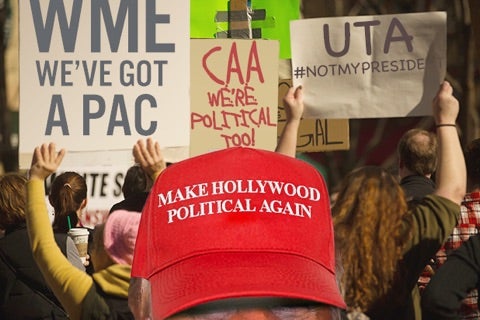 Hollywood one-upmanship took a turn into politics this week, as leading talent agency CAA followed in the footsteps of rivals WME and UTA by hastily announcing a day-long summit of political leaders for Thursday.

Who could blame them given the national attention their competitors have grabbed with gestures like forming an in-house political action committee and cancelling a lavish Oscar party in favor of an anti-immigration rally in the middle of Beverly Hills?

The surprise program falls just one day before UTA’s “United Voices” rally, an event designed to “stand against policies of exclusion and division.” The Jeremy Zimmer-run agency announced the rally with the simultaneous cancellation of its Oscar celebration and a $250,000 donation to the ACLU in early February.

But the agencies’ new push into political advocacy could have its down side — even in a town and industry well known for its left-leaning activism. “I see it backfiring,” said one top manager who works with all three agencies, speaking to TheWrap on the condition of anonymity.

Also Read: Fiery Hollywood Women Rally in Sundance: 'We Will Not Go Backwards'

“Clients want to know they are working for them, not spending so much time trying to outdo each other with political statements,” the insider added.

WME, run by Co-CEOs Ari Emanuel and Patrick Whitesell, arguably started the trend when they told employees they would form a federal political action committee — only an hour before UTA announced their rally.

Its mission, according to an internal memo from Emanuel, is “convening internal and external forums with politicians and allied stakeholders.”

But there are risks for  WME to launch an entire division that deviates from its core business and thrusts the company into a treacherous political arena.

Emanuel surprsied many in the industry last November by meeting with President Trump — a former client — in Washington, D.C,. only days after the election. The president called the agent the “King of Hollywood,” which prompted speculation about his role in the administration and how Hollywood might cooperate with it.