Progress made in gender and ethnic diversity in Hollywood productions that was propelled by #OscarsSoWhite seven years ago is showing signs of stalling out, according to the latest report from the USC Annenberg Inclusion Initiative.

The new report published Monday found that the percentage of filmmakers from underrepresented ethnic groups among the directors of the top 100 highest-grossing films at the box office in 2022 was 20.7%, down from the 15-year high of 27.3% in 2021.

“Industry advocates have made claims regarding their support for women—funding programs and fellowships, adding women to consideration lists for open jobs. Yet at the point when support matters most—hiring—there are still barriers that prevent women from working on the top movies released each year,” wrote Dr. Stacy L. Smith, founder of the Annenberg Inclusion Initiative in the report’s conclusion.

“One such barrier is repeat opportunities. More than three-quarters of the women directors in the sample have helmed only one popular movie in the 16 years we studied, while this is true for just over half of men,” Smith continued. “For the numbers to change, companies from the major studios to independent distributors must not only hire women behind the camera, and more than once, they must provide the marketing and publicity support that films need to reach broad audiences.” 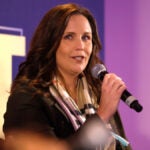 Smith also recommended that studios and executives push beyond just “considering” women for directing roles, establishing more concrete criteria for hiring filmmakers to overcome the cognitive biases that regularly associate film directing with men. She pointed to Donna Langley, chairman of Universal Pictures, as an executive that has adopted such a process.

“Perhaps executives at other studios should look to a distributor who has successfully increased representation behind the camera and ask themselves, ‘what would Donna Langley do?'” Smith quipped. “A wristband with this phrase (e.g., “WWDD”) might also be helpful as a reminder.”