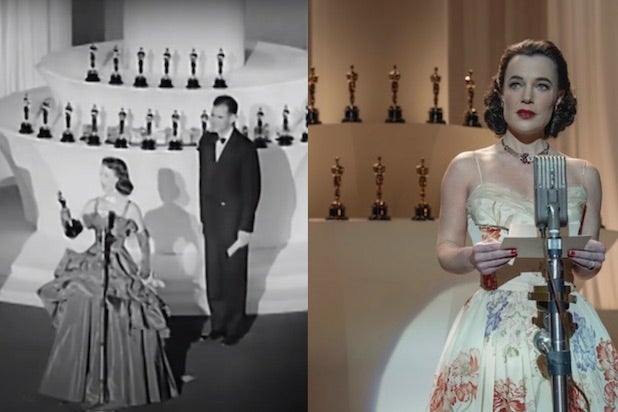 Left, the Academy Awards in 1948; right, that show as depicted on "Hollywood" / Netflix

Warning: Do not read this story until you have seen the final episode of “Hollywood.”

For its first six episodes, Ryan Murphy’s “Hollywood” mixed reality and fiction in its portrait of the movie business in the years after World War II. But there’s a good reason why the final episode is titled “A Hollywood Ending” – because it uses the Oscars of March 1948 to paint a picture of Hollywood growing more tolerant, more open to minorities and gays and more embracing of the kind of films that in reality were nearly impossible to make at the time or for decades later.

Like the ending of Quentin Tarantino’s “Once Upon a Time … in Hollywood,” the episode veers into a kind of wish-fulfillment fiction that is the whole point of its existence.

So we’re not really fact-checking when we look at the show’s depiction of the 20th Academy Awards ceremony. No, an interracial drama named “Meg” didn’t win six Oscars that night, and Murphy and “Hollywood” didn’t get it wrong when they show that happening in the episode – they simply rewrote history quite deliberately.

But if you’re curious about who really won the big awards that night, about what happened back in the real world 72 years ago and whose big wins got pushed out in Murphy’s deliberate inventions, read on.

WHAT THE “HOLLYWOOD” VERSION OF THE OSCARS DIDN’T CHANGE

The Best Film Editing award really did go to “Body and Soul.”

The Best Director award was presented by Donald Crisp.

The set really did look like that, with a giant pillar in the middle of the stage and Oscar statuettes arranged on two circular levels around it.

Best Supporting Actress: The real winner was Celeste Holm for “Gentlemen’s Agreement,” not Anna May Wong for “Meg.” The fifth nominee was actually Ethel Barrymore for “The Paradine Case.”

Best Supporting Actor: The actual nominee, instead of Jack Costello for “Meg,” was Robert Ryan for “Crossfire.”

Best Original Screenplay: The real winner was Sidney Sheldon for “The Bachelor and the Bobby-Soxer,” not Archie Colman for “Meg.” The actual nominees who are not mentioned in “Hollywood” were Sergio Amidei, Adolfo Franci, C.G. Viola and Cesare Zavattini for the Italian-language “Shoe-Shine.”

Best Director: The real winner was Elia Kazan for “Gentlemen’s Agreement.” The episode’s reading of the nominees leaves out Edward Dmytryk for “Crossfire.”

(Dmytryk might understand: By the time the Oscars rolled around, he had been fired by RKO and cited for contempt of Congress for refusing to testify in front of the House Un-American Activities Committee.)

Best Actress: The real winner was Loretta Young for “The Farmer’s Daughter,” and the omitted nominee was Dorothy McGuire for “Gentlemen’s Agreement.”

WHO ACTUALLY PRESENTED THE OSCARS SEEN IN THE EPISODE

Best Supporting Actress was presented by Donald Crisp, not the fictional “Jean Crandall.”

Best Supporting Actor was presented by Anne Baxter, not Ernest Borgnine. (Borgnine would not make his first movie for another three years.)

Best Actress was presented by Frederic March, not Vivien Leigh.

The order of awards was completely scrambled from the way they were actually given out. At this particular show, Best Original Screenplay was one of the first categories presented, and Best Picture was actually handed out before Best Actress.

The Best Supporting Actress presenter did not say “and the Oscar goes to,” but used the then-standard “and the winner is.”

The Shrine Auditorium in downtown Los Angeles, where the show actually took place, is much larger than the downtown venue where the episode was shot, the Orpheum Theatre, and it does not have opera boxes along the side walls. The Shrine seats more than 6,000 people, making it the largest theater ever to host an Oscars show. The Orpheum holds about 2,000.

The Oscars were a hotbed of glitz, glamour, greed, pettiness, ecstasy and naked ambition – in real life and in “Hollywood,” as always.