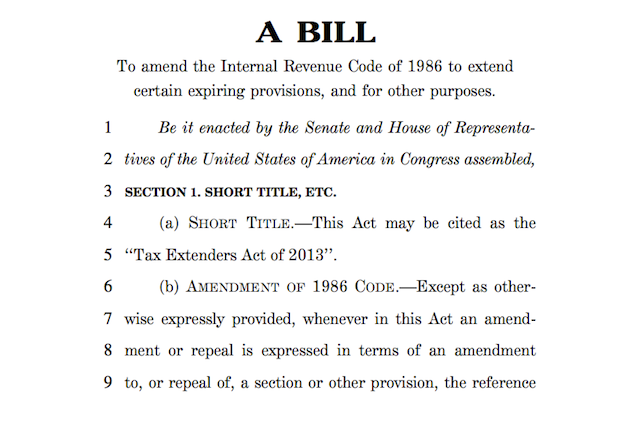 Film and television producers looking to shoot in the United States have lost a lucrative federal tax incentive: Section 181, part of a larger package of credits known as the Extenders, expired at the end of 2013 — and Congress has yet to renew it.

The credit was a big deal when the Congress first enacted it in 2004, and remains helpful to smaller productions since it promises tax credits on up to $15 million of a production budget. If you shoot in a distressed area, you can receive credits on up to $20 million.

Section 181 permits producers to deduct some of their expenses before they see any profit. If it expires, they will not be able to do that.

“It will make a difference, especially for smaller deals,” Marvin Kirsner, a shareholder at law firm Greenberg Traurig, told TheWrap. “It is not just about the value of the money. A large part is that it makes accounting much easier.”

Congress has let Section 181 expire twice before, both times renewing it and applying the incentive to productions retroactively. Senate Majority Leader Harry Reid introduced an extenders package in December (photo above), but it did not receive unanimous approval.

“We have not seen a similar measure from the House as of yet so I think it all remains to be seen – but there is clearly interest from Senate Leadership at the very least,” an individual familiar with the legislation told TheWrap.

Kirsner said Congress has picked up the extenders in the past because it has “ramifications for the entire economy.

“The Extenders bill is a good start,” Kirsner said. “We will need to see where the extenders bill will go in a very divided Congress.”

Section 181 is not as important to filmmakers as it once was due to the proliferation of state tax credits. States such as Louisiana, Montana, Georgia and New York have enacted lucrative tax credits over the past few years to lure productions and stimulate the local economy. These can even influence the narrative of a show.

One season of the Showtime series “Weeds” took its main cast on a road trip across the United States that only shot in states with tax credits.

“It was no accident,” Kirsner said.

Yet the federal credit remains an incentive to keep productions in the United States, especially for television productions. The deduction applies to each episode of a series up to 44 episodes.