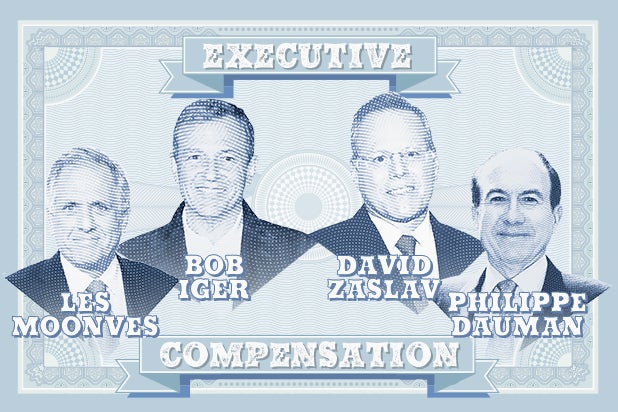 Philippe Dauman, we’ve got good news and bad news: Last year, the then-Viacom exec made the most money of his life: $93 million, to be exact. These days, Dauman’s probably spending some of that on the golf course. Oh, and he has no good business reason left to just play nine holes.

Of course, Dauman’s golden parachute had nothing on DreamWorks Animation boss Jeffrey Katzenberg’s more than $400 million windfall from the sale of his studio to Comcast’s NBCUniversal. Aside from that cash-out on his equity in DWA, Katzenberg pocketed $44.5 million in payments relating to the company’s change of ownership and stock appreciation.

Among moguls who still have jobs, CBS’ Les Moonves so far edges Disney’s Bob Iger for most profitable 2016. On the flip side of these rankings, Apple’s Tim Cook managed to avoid the chief executive basement by a few million bucks.

In other words, don’t expect Tribune Media’s Peter Liguori to pick up the tab anytime soon at a retreat for top execs: He’s currently the lowest paid on our list, and the man is also out of a job.

Below is TheWrap‘s list of executive compensation details from 2016 corporate SEC filings. To compare it to past years, click through our previous annual reports:

Some performance or stock-price based compensations are related to fiscal 2016 performance, while others are a barometer of a company’s showing in 2015 or even earlier.

Disney’s Bob Iger recently agreed to add an extra year to his contract, agreeing to stay on until July 2019 after the Mouse House hasn’t been able to find a successor to its big cheese despite a years-long search. We can assume he’s getting paid handsomely to delay retirement by a year: Iger hauled in $43.9 million during 2016, which was actually a 2.2 percent pay cut from the previous year.

Since Iger took over as CEO on October 1, 2005, Disney’s stock price has nearly quadrupled. Its movie studio remains the dominant force in Hollywood, claiming 26 percent market share in the U.S. last year and becoming the first-ever studio to gross $7 billion worldwide. The company’s cable networks, led by ESPN, have suffered subscriber losses as cord-cutting has gained in popularity, but Disney acquired a stake in streaming technology company BAMTech last year and has plans to launch a standalone ESPN.

And while Iger nears the end of his career as an executive, his wife, journalist Willow Bay, landed a big job this year. In March, she was named dean of the Annenberg School of Communication and Journalism at the University of Southern California.

Zaslav, who took home a healthy $156.1 million in 2014, has had to make do with less than $40 million in each of the last two years. His 2014 bonanza was a result of contract negotiations that saw the Discovery boss pocket more than $94 million in new stock awards.

Discovery’s stock rose 3 percent in 2016, a year in which the pay-TV provider boosted revenue by 2 percent and net income by 15 percent. And although the company has dedicated a lot of resources into its international expansion, its U.S. growth was actually more impressive.

In October, Discovery announced a minority investment in Group Nine Media, the parent company behind digital-first outlets including NowThis and Thrillist, as it looks to reach more cord-cutting millenials. Zaslav won’t have any problem paying for cable, though.

The man in charge of the world’s largest company by market cap had a relatively modest 2016 compensation package that didn’t even put him in the eight-figure range — or about what a serviceable relief pitcher can command today.

And unlike many CEOs, Cook’s pay was dinged for actual performance issues. Even with the iPhone 7 launch, Apple failed to meet its targets for net sales and operating income, which resulted in him and other execs getting just 89.5 percent of their allocated cash incentives.

Don’t feel too sorry for Cook, though: He holds more than $100 million in vested Apple shares. That’s a lot of headphone jack-to-lightning adapters.

Leslie Moonves is the highest-paid executive in our round-up thus far, though his take pales in comparison to the guy below. That said, at least Les still has a job.

The CBS head honcho hauled in a cool $69.6 million in 2016 — the biggest raise of anyone not being shown the exit door. We’ll show due respect to the man who has helped make CBS America’s most-watched network for 14 of the past 15 years.

While Moonves’ salary remained steady at $3.5 million annually, the chairman, president and CEO nabbed an extra $13 million in bonuses across 2016. Not bad at all. Before you bury his huge payday, remember, Moonves earned his money by making dough for shareholders: CBS stock closed 2015 at $47.13; it finished this past year at $63.62 per share.

Where do we even begin with Philippe Dauman’s 2016?

That final catch-all category includes Sumner Redstone’s former protege’s giant golden parachute. Those two — along with Sumner’s daughter Shari Redstone — spent most of last year battling for power in the court system and through the media. The Redstones ultimately won, and Dauman was sent packing.

Peter Liguori, the president and CEO of WGN America parent company Tribune Media, made $400,000 less last year than he did in 2015, and is currently the lowest-paid top executive in our limited 2016 roundup. That’s a bummer.

Of course, Liguori won’t even make our list next year — the top dog announced in January that he was stepping down from the company’s top job.

“Following the successful completion of several financial, strategic and creative initiatives, culminating in the pending sale of Gracenote, Tribune Media is well advanced in its transformation to a more focused broadcast and cable networks company,” Liguori said in a statement.

Katzenberg sold his DreamWorks Animation to Comcast’s NBCUniversal last year in a $3.8 billion deal that left the longtime studio boss without a fiefdom. But don’t feel too sorry for him: as part of the deal, Katzenberg hauled in $44.5 million in change-of-control payments and vested stock appreciation rights, making him one of the highest-paid CEOs in the country — even without factoring in any payment for the job itself.

DWA, no longer its own company, didn’t release a proxy statement this year, but Katzenberg had been making $2.5 million a year in salary.

The studio behind some of the most successful animated franchises of all-time, including “Shrek” and “Kung Fu Panda,” was able to command that premium price at a time when family fare has been one of Hollywood’s most reliable genres. Disney’s “Beauty and the Beast” live-live action remake has grossed more than $1 billion worldwide.

Katzenberg appears to already be plotting his next move — in January, he raised $591.5 million for WndrCo, a venture that aims to produce TV designed for mobile screens.

Netflix, which spends more on content than any of the old-line media companies — an estimated $6 billion this year — doesn’t give its top execs quite the same gilded compensation packages the likes of CBS and Disney hand out. But with its stock up 8 percent last year — and 16 percent year-to-date in 2017 — the streaming giant was able to give its top two execs a raise.

Last week, Hastings celebrated Netflix clearing the 100 million subscriber mark by having a steak dinner alone at Denny’s, which was the same way he commemorated the service’s first million. Earlier this month, Sarandos told TheWrap he intends to bring as much of Netflix’ production to California as possible, saying he’d prefer the state invest in infrastructure rather than tax credits.

AMC Networks CEO Josh Sapan saw his pay rise by nearly $13 million last year, as he took home $30.5 billion in total compensation. That was a substantial 72 percent increase over his 2015 pay package.

AMC’s zombie drama “The Walking Dead” remains a ratings monster going into its eighth season, which is set to premiere in October. In addition to its flagship AMC channel, the company owns other networks including IFC and BBC America, as well as indie film company IFC Films, and horror streaming service Shudder.

On a percentage basis, Bewkes’ executive compensation from last year rose 3.5 percent. That uptick was thanks to his non-equity incentive plan pay, which rose $1.29 million year over year. His stock and options awards slipped a bit, though no other changes real particularly material.

NBCUniversal CEO Steve Burke made $46.1 million last year, a big 36.8 percent pay increase from 2015. It was an eventful year for Burke, as NBCUniversal acquired DreamWorks Animation for $3.8 billion, bringing the animation studios behind “Despicable Me” and “Kung Fu Panda” under the same roof.

Universal Pictures just released the eighth film in the “Fast and Furious” franchise, “Fate of the Furious,” which has grossed nearly $1 billion worldwide since its April 14 release. And on the TV side, NBC’s breakout hit “This Is Us” captivated viewers with its intertwined stories of a family then and now, and is picking up plenty of awards buzz.

Even though its “La La Land” ended up not being named Best Picture after an embarrassing mix-up at this year’s Academy Awards, Lionsgate executives took home plenty of gold last year. CEO Jon Feltheimer hauled in a whopping $35.3 million — a more than $25 million, or 223.2 percent, bump from last year. That included a healthy $16.3 million in option awards after Feltheimer agreed to a new deal in October that will keep him in the job until 2023.

Aside from the awards love given to “La La Land,” “Hell or High Water” and “Hacksaw Ridge,” Wall Street also gave the mini-major plenty of kudos, as its stock rose 22.4 percent during the fiscal year.

It’s been a year of major transition at Twenty-First Century Fox, as longtime Fox News host Bill O’Reilly and the network’s chairman and CEO, Roger Ailes, both departed as a result of sexual harassment scandals in the 12 months ended June 30, which the media giant classifies as its 2016 fiscal year.

The 2016 executive compensation for other top media company executives has yet to be publicly filed with the SEC. This story will be updated as each company makes that pay available.