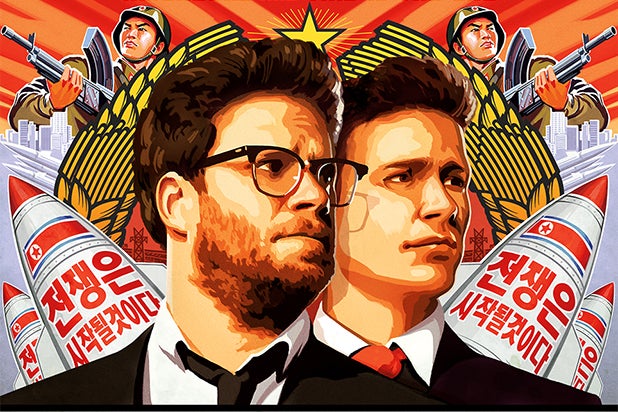 Sony has told domestic theatrical chains that they will support their decision if they decide to scrap the release of “The Interview” on Christmas Day in the face of threats made on Tuesday to deliver a “9-11” style attack on theaters that show the movie.

A federal law enforcement official told TheWrap on Tuesday that the National Security Agency or other law enforcement could recommend canceling the release for safety reasons. The final call would still be made by Sony and the theater chains, but it’s hard to imagine the studio would release the film in the face of that advice from law enforcement.

Sony has told the theatrical chains that the decision is theirs and they will support them if they decide to pull the release, according to an individual with knowledge of the situation. None has yet announced such a decision.

But the next move by the studio or the theatrical chains was unclear, and the silence across the movie industry was deafening in the wake of the new threat.

TheWrap reached out to the Regal Entertainment Group, which, with 574 theaters, is the largest chain in the United States and Canada, as well as AMC Entertainment (344 theaters) and Cinemark Theaters (332). Each declined to comment in the wake of the new threat.

The National Association of Theater Owners, the umbrella group representing the roughly 5,300 theaters in North America, also had no immediate comment. Neither did the Motion Picture Association of America, an alliance of the major Hollywood movie studios.  All of the studios’ theaters are facing the threat, since their movies would be showing in the same venues as “The Interview.”

A spokesman for the Department of Homeland Security issued a statement saying:  “We are still analyzing the credibility of these statements, but at this time there is no credible intelligence to indicate an active plot against movie theaters within the United States.”

Still, the risk involved in releasing “The Interview” was ratcheted up considerably on Tuesday with the latest threat by hackers to deliver attacks reminiscent of 9/11 on theaters that show the Seth Rogen–James Franco comedy, which is scheduled to open in 2,000 theaters on Christmas Day.

For top executives Amy Pascal and Michael Lynton, the pressing questions have become: What happens now, and is any outcome favorable? Speaking with TheWrap reporters, several industry players see a huge predicament for the embattled leaders.

“Amy is in a double bind, and I don’t know how she gets out,” one entertainment industry marketing veteran told TheWrap. “The double bind is, if she pulls [the film] she shows how bad her judgment was in making it … [but] I don’t think they can pull the movie because it’s almost like paying ransom money.”

That figurative ransom has been the hackers’ motivation since these attacks began, confirmed Monday in a letter sent by Sony legal counsel. Demands have been set for Sony to pull distribution for the film, which depicts the assassination of North Korean leader Kim Jong-un.

“The hackers have the ability to get a message out, and they don’t necessarily need to execute an attack to be effective,” said Howard Bragman, chairman and founder of Fifteen Minutes and longtime PR crisis counselor. “This will probably keep some people away from the movie no matter what.”

“But I think they [should] release it. We should all go to the movies, otherwise these people win,” Bragman added.