It may seem counterintuitive — and a little risky in an industry where clear use of the English language is required — but the subtitles on many major DVD releases are increasingly being created in India, the Philippines, Canada and other countries where, of course, the labor is cheaper. 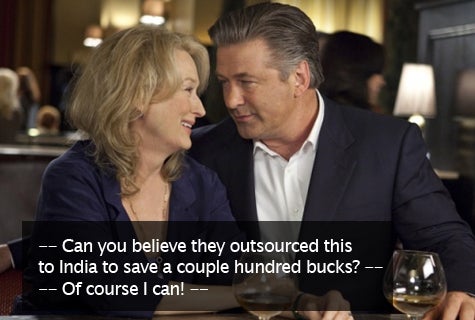 “Most of the major studios have their English DVD captioning done by companies who outsource the work, taking jobs away from Americans,” says a disgruntled 15-year veteran of the captioning field, which for years was centered in the San Fernando Valley near Los Angeles.

SDI, a major player in the field and a company that lists DreamWorks, NBC Universal, Paramount, Sony, Fox and Warner Bros. among its clients, reportedly told U.S. captioning workers a couple of years ago that they needed to take a 50 percent pay cut — or quit.

(One contractor for the company says that he reluctantly agreed, and then never heard from the company again: “It was a phony proposal,” he says.)

Softitler, a company owned by Deluxe Laboratories, now has much of its work done in India by DigiCaptions, a Bangalore-based firm acquired by Deluxe in 2004. PeopleSupport, a Philippines-based outsourcing provider, employs some 1,500 workers to do English-language closed-captioning work (mostly for TV), according to the Manila Times.

In fact, of the major companies that do DVD captions and closed-captioning work, only one — Captions Inc. — does all of its English-language work in the United States.  (Captions Inc. does major studio work, including subtitling for Fox.  "Crazy Heart," stills from which were used to illustrate this story, was captioned by the company.)

“It helps us address both the time and the cost pressures,” says Morgan Fiumi, senior vice president and chief operating officer of Deluxe Digital Studios. “In the last few years, the studios have been under a lot of pressure, and they look to their vendors to address some of those cost-cutting needs. It has gotten very competitive, and it’s a very thin-margin business.”

In fact, captioning isn’t even a particularly lavish expenditure for movie studios.

An American company might charge $8 per run-time minute to prepare a file that can be used for English-language subtitles or closed captions (which also include sound effects and speaker identification); those files then can be used as the basis for foreign translations, which have almost always been done overseas.

At that rate, a 90-minute movie would only cost a studio $720. In India, though, the same work could be done for $150 — not a substantial savings in dollars, but a huge one, percentage-wise.

“There’s no way to compete with the rates in India,” says a current worker in the field, who, like all the others still doing business with the studios, asked not to be identified.

It might seem unnecessary to go to such lengths for a savings of less than $600 per film — but when you consider that studios like NBC Universal also have TV networks that generate an enormous amount of content that requires captioning, the savings becomes more substantial. The overseas apparatus set up to do the work can be used across-the-board for television, video and feature-film content.

When Softitler prepares an “English master file” for the subtitling and closed-captioning of a feature DVD release, the company receives the content in its Burbank office. It sends that on to DigiCaptions in Bangalore, where English-speaking workers assign time codes and prepare the first pass of the file.

That file, says Fiumi, then goes back to North America, where Subtitler staffers proofread and edit it, particularly to make sure that the pop-culture references in the film are understood and identified.

“With the time-zone difference, the end of our day is the beginning of their day,” says Fiumi. “Because of that, we’re able to prepare a file in 24 hours, when it might have taken three days to do the whole thing in the United States.

“We think we’ve found the optimal mix by specializing the labor. It’s too expensive to do it all here, but you don’t get the accuracy and quality, or the desired timeline, by doing it all there.”

English, he insists, is “the mother tongue” of the workers in India, all of whom have college degrees in the liberal arts. “There’s a very high skill level, and the only place we face challenges is in the references to pop culture. And that’s why we have the review here.”

On the other hand, DigiCaptions recently posted an opening on an Indian job board for an “English Editor” in Bangalore. The job description, with typos intact: “Creating, Editing and Proofreading English subtitles of major Hollywood films and TV serials for grammatical accuracy Footnoting cultural references and expressions as an aid to translators Performing audio fidelity checks to ensure subtitles match the audio Localizing language and spelling for British- and U.S.-Englis.”

Postings like that are bound to increase skepticism in the San Fernando Valley, where many of the American veterans of the field are now working at lower rates, if they’re still in the field at all.

“It makes sense to do translations overseas, and I can almost see doing English subtitles in English-speaking India,” said one vet. “But if you’re trying to annotate cultural references in foreign countries, good luck to you.”

ADDENDUM: Since the original publication of this story, theWrap has learned that "Crazy Heart," the film used to illustrate the story, was in fact captioned in Burbank by Captions, Inc., the only major captioning company that does all of its work in the United States. We regret the implication that the film’s captioning was outsourced.