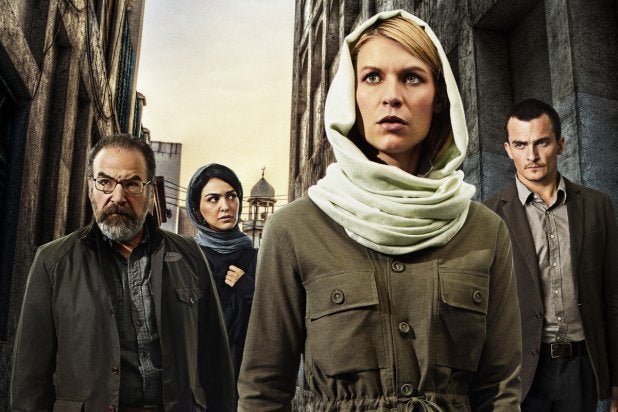 Let’s face it, after receiving well-deserved critical and viewer acclaim for its first stellar season, Showtime’s “Homeland” proceeded to slowly go off the rails in its subsequent two years on the air. The problem could be summed up in two words: Damian Lewis.

Don’t get me wrong, the Emmy-winning actor was brilliant as the tortured Nicholas Brody, and it wasn’t even necessarily his fault he became the problem. Brody was supposed to die, and for Carrie Mathison’s (Claire Danes) story, he needed to die. But he was an acclaimed award winner, so he didn’t die.

And then he continued to not die and the show became borderline terrible until finally… mercifully… he died toward the close of the third season. After a breath to bid him and his outstayed-their-welcome family, the show has reset and is now prepared to move forward. And how refreshing it is.

Claire Danes is the heart and soul of this show, and she is as compelling an actress today as she was when she was breaking our hearts as Angela Chase on “My So-Called Life.” No female actress on the small screen plays flawed but strong better. It was so frustrating to see a woman I saw as strong and in command swooning like a ditzy schoolgirl over a boy to the point she lost all sense of herself and her values.

The shadow of Lewis still looms rather large in Carrie’s life, but it’s actually refreshing because it peeled back another layer into her unique mind. Carrie is a mother now, only she’s not going to win any awards for a stellar performance in the role. The child she had with Brody is a haunting reminder of his impact on her life, so she must decide how to move forward and deal with this new burden of responsibility.

Carrie is someone who has always been driven by her work, to the point that it has impacted her health. But she’s also extremely good at what she does — essentially she’s the Jack Bauer of counter-intelligence, and like Kiefer Suthlerand on “24,” everything takes a back seat to saving the world.

Only, “Homeland” is on Showtime, so everything can be taken to even more uncomfortable extremes, whether it’s Carrie being bipolar and off her meds, struggling with motherhood, or trying to control the aftermath of the drone strike that sets in motion the overarching storyline of the upcoming season. In charge of the mission, Carrie finds herself in the heart of the firestorm when it goes terribly wrong.

A little digging reveals that there is something more lurking beneath the mess, and of course our hero is the only one capable of taking care of it. Whether this is true or not, Carrie needs it to be, because she is nothing without the work.

On the same page as Carrie, but representing what happens when the work isn’t the biggest part of your life anymore, we have Mandy Patinkin’s Saul Berenson. Now working in the private sector, and struggling to convince himself that he prefers it, it’s inevitable that he’s going to find himself back in the middle of the action, by Carrie’s side and probably the one who’s going to have to reign her in.

As for the show’s new male lead, Rupert Friend as Peter Quinn, he and Carrie are refreshingly just colleagues. The two are tested in a major way early in the season’s run, which looks like it will drive their emotional narrative through these 12 episodes. Quinn takes it particularly hard, and while his response is rather cliche, it is nevertheless well done and Friend captures it with authenticity. This is a tortured lead I can get behind, as he’s interesting and he’s not inherently making Carrie stupid.

Rounding out the main cast is Suraj Sharma, best known for “Life of Pi,” as a survivor of the drone strike. In a refreshing turn, he is not a two-dimensional stereotype of a Middle Eastern young man, but rather a nuanced and multi-layered character every bit as fascinating as the rest of the cast.

In fact, watching the story of his perspective humanizes the violence and destruction from the ground level of these missile strikes the U.S. carries out in the Middle East. These are people living their lives in the shadow of American might, and while it might be easy to paint them all the same way with a wide brush of anti-American sentiment, they are as varied in their thoughts and geopolitical stances as we are.

In other words, they’re human beings just trying to get by day to day, which is easy to forget. Dramatizing the complexities of our ongoing wars in the Middle East is a big part of why “Homeland” was such a powerful show, which is why it was so disappointing when it became mired in “Romeo & Juliet,” star-crossed lovers nonsense. “Homeland” is about international intrigue and espionage. Thank you for getting back to that.

Season 4 is a hard reset for a show that desperately needed one. With Brody finally out of the way, and unable to distract Carrie, we finally get to see why she was so revered and respected by the C.I.A. despite her bipolor disorder and dangerously erratic behavior.

We’re getting the character we knew she was capable of being, with the added layer of new motherhood. It’s such a rich topic to explore with Carrie, so while I can’t forgive that his story took the show so far off the rails on the past two seasons, I will say that I look forward to this added element.

For the most part, I’m going to think of this as a Season 2 redo. At the end of “my” Season 1, Brody died and Carrie was pregnant with his child. Most of the rest of that nonsense didn’t happen. The first year was one of the most intense and exciting series on television, and Claire Danes brought to life one of the most exciting and refreshing characters seen in years.

Ignoring the past two seasons, we can pretend that we’re coming off of those Emmy-winning first 12 episodes. “Homeland” is looking good again and I’m as optimistic as I can be. Admittedly, it’s too early to declare definitively that “Homeland” is back, but I will say it’s back to being a show I’m looking forward to watching, rather than one that made me angry as it lost its credibility mostly and lost its way completely.