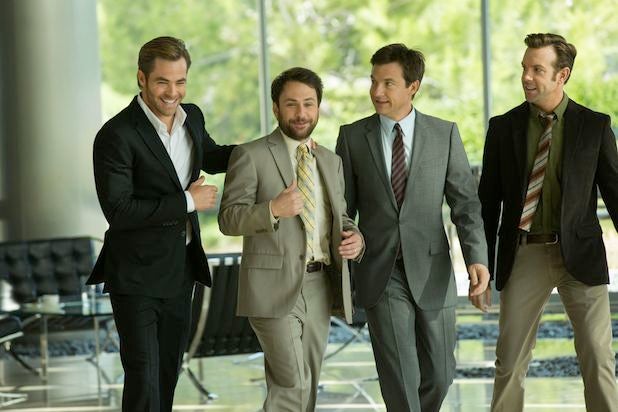 15 minutes of laughter supposedly burns anywhere between 10 and 40 calories, but critics are suggesting that audiences will get very little exercise if they choose to sit through “Horrible Bosses 2” on Thanksgiving.

The sequel directed by Sean Anders (“That’s My Boy”) has been declared “rotten” by the majority of critics aggregated on Rotten Tomatoes. The alleged comedy starring Jason Sudeikis, Jason Bateman and Charlie Day as three buddies trying to get revenge an an evil investor (Christoph Waltz) by kidnapping his son (Chris Pine), and somehow running into a sex-crazed Jennifer Aniston again, has a mere 30 percent approval rating.

At the moment, it appears 54 out of 77 critics would have had more fun risking prison time by kidnapping their boss’ children in real life than sitting through the follow-up adventure to a 2011 comedy that nobody asked for, unlike “Dumb and Dumber To” — a critically-panned, but successful comedy that has the advantage of telling haters, “Hey, you idiots begged us to make this for 20 years.”

See video: 'Dumb and Dumber To' Sequel? Peter Farrelly Is 'Tellin' You There's a Chance'

So in the spirit of giving thanks for all the fearless critics who work to make sure you don’t spend your hard-earned money on crappy movies, here are 10 more brutal reviews of “Horrible Bosses 2.”

“‘Horrible Bosses 2,’ one of the sloppiest and most unnecessary Hollywood sequels ever made, isn’t dirtier or more offensive than its 2011 forerunner. But it is infinitely dumber and not half as funny. This disgracefully slapdash farce, directed by Sean Anders from a screenplay he wrote with John Morris, brings back many of the same stars from the first film in token appearances to try to maintain an illusion of continuity. But the story doesn’t even try to make sense. You often have the queasy feeling that the screenplay was improvised on the spot.”

“Duct tape, thick rope and the threat of being shot all figure prominently in ‘Horrible Bosses 2.’ All would have been required to keep me in my seat if it weren’t my job to report back on this factory-issued sequel.”

“The difference between the Three Stooges and the vengeful trio of ‘Horrible Bosses 2’ is that the Stooges were frequently funny, while these latter-day oafs rarely are. At least not in this wretched excuse for a comedy, which adds disappointment to insult and prompts the urgent question: What in blazes happened? Jason Bateman, Jason Sudeikis and Charlie Day were a riot in the original ‘Horrible Bosses’ of three long years ago.”

“Everyone in the cast is just punching the clock through the preposterous and empty second half of the film. And that makes ‘Horrible Bosses 2’ feel considerably longer than its bloated running time.”

“Perhaps there are viewers who might label this a modern classic of hilarity. For my part, I didn’t laugh once during the 108 minutes ‘Horrible Bosses 2’ was on screen — even the end credit outtakes failed to amuse. The humor is on par with jokes that ten year old boys tell each other in school bathrooms. While it’s entirely possible to be entertained by dirty, juvenile comedy, that’s rarely the case when it’s as cheap, easy, and predictable as in ‘Horrible Bosses 2.'”

“The script has to bend over backwards and break its own spine just to turn Nick, Kurt and Dale into underdog criminals again, and set them about on yet another incompetent spree. But familiarity is the enemy of laughter, and this time the enemy has won: ‘Horrible Bosses 2’ is a textbook example of a lazy comedy sequel. It officially earns the right to call itself ‘horrible.'”

“It’s painful to watch the same guy who plays Capt. Kirk in the ‘Star Trek’ movies boldly go down this toilet. ‘Horrible Bosses 2’ is further proof that likable actors have to take an occasional sick day.”

“The first ‘Bosses’ made more than $200 million worldwide. And so here we are, with a lackluster second effort that mines a lot of the same jokes. Only no joke is as funny the second time around, even when it’s being delivered by really funny people. Imagine nearly two hours of that, and you’ll have the idea.”

“What sinks the movie, though, is the way it degrades its three heroes. In the original film (also about a botched crime), they were average Joes prone to dumb mistakes; here, they are absolute morons, devoid of critical thinking skills and unable to perform simple tasks. Their idiocy allows for plot complications and humor (of a sort), but it also makes them exasperating and insufferable.”

“‘Horrible Bosses 2’ is, for the most part, insufferable. It’s a virtually laugh-free cavern, a black hole of humor, the type of place where good moods go to die. Not only do jokes not land (there’s a recurring gag about Sudeikis’ ring tone being Katy Perry’s ‘Roar’ and a prolonged reference to ‘Predator’) but a shocking amount of time is devoted to referencing the original film, a movie that we’re still not sure anybody actually liked, much less remembered.”