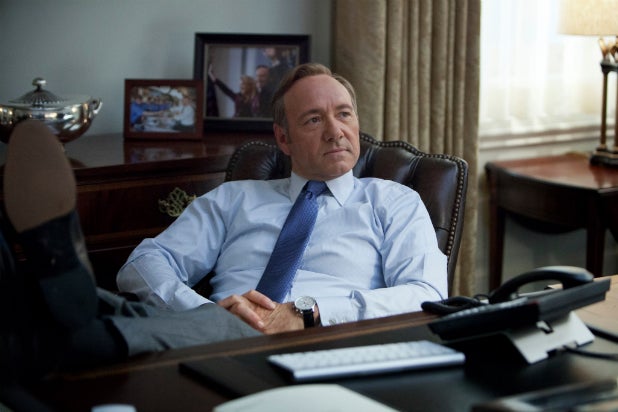 It turns out Kevin Spacey hasn’t been talking to us, the viewers, in his trademark asides on “House of Cards.”

In a round table with reporters Tuesday, the show’s star and executive producer revealed that he has a specific person in mind when his character, Francis Underwood, offers his running commentaries to the camera. The asides are the most divisive element of the show — beloved by some fans, distracting for others.

Though he addresses his off-screen confidante as “you” throughout the show, Spacey says he isn’t talking to you, specifically. Unless you happen to go way back with Underwood.

“Instead of thinking that I’m talking to lots and lots of people, I’m talking to my best friend,” Spacey explained. “The person I trust more than anyone.”

The bond between Underwood and this friend is so strong, Spacey said, that he sometimes doesn’t feel the need to speak all the lines that showrunner Beau Willimon writes for him.

One of the delights of interviewing Spacey is that the Oscar winner doesn’t just explain his acting — he makes his points by acting them out. So you get to not just talk with a great actor, but also watch him perform up-close.

“In many cases when we’ve done the direct address stuff, sometimes there will be a line of dialogue and I’ll say to Beau” — Spacey switched momentarily to a whisper — “I don’t think I need to say anything.’ It just is a look. Because we know what that’s like.”

Spacey stopped suddenly, and shot a reporter A Look.

Spacey noted that Shakespeare created the form of direct address employed by “House of Cards,” in which a speaker interacts with the audience more than he would in a monologue.

“The character’s stopping in the middle of the play and going, ‘Okay. Um. Do you see that person over there? I’m going to go f—ing kill him, and get his wife to marry me. Okay, watch this.'”

“And then he goes over and does it and comes back and says, ‘Can you f—ing believe I got away with that?”