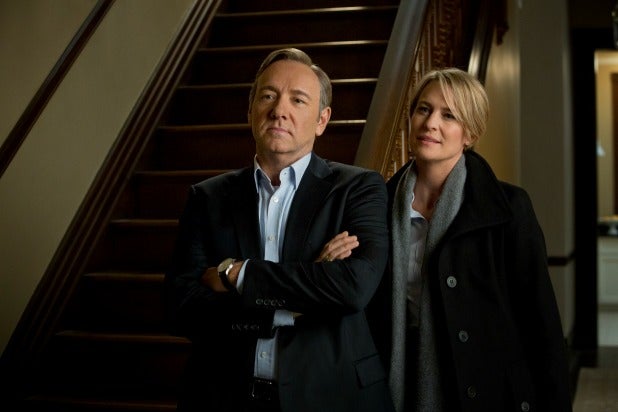 A third season of Netflix’s acclaimed “House of Cards” is on the way, says star Robin Wright.

Also read: Kevin Spacey Plays By One Rule in ‘House of Cards’ Season 2 Trailer: ‘Hunt, or Be Hunted’ (Video)

Wright spoke at a press junket for the show’s second season, which debuts Feb. 14. Whether the show would go beyond two seasons has been an open question since its debut last year. It helped immediately establish Netflix as a force to be reckoned with in producing original content, earning a slew of awards nominations.

A Netflix spokeswoman confirmed the third season soon after Wright broke the news.

Also read: Kevin Spacey Plays By One Rule in ‘House of Cards’ Season 2 Trailer: ‘Hunt, or Be Hunted’ (Video)

“We’re only on the second season so far. When you think about all the other shows that have gone on five, six, eight seasons. We’re amateurs in a sense. We’re Bambis in the woods,” she joked.

Asked if she could see the show going for five, six or eight seasons, she replied, “Sure, bring it on.”

Wright declined to say whether scripts for the third season are underway. “Can’t say, don’t know, not sure,” she quipped.

The actress earned a Golden Globe for Best Performance by an Actress in a Television Series – Drama for her role as Claire Underwood, the wife and partner in crime of Kevin Spacey‘s Frank Underwood.