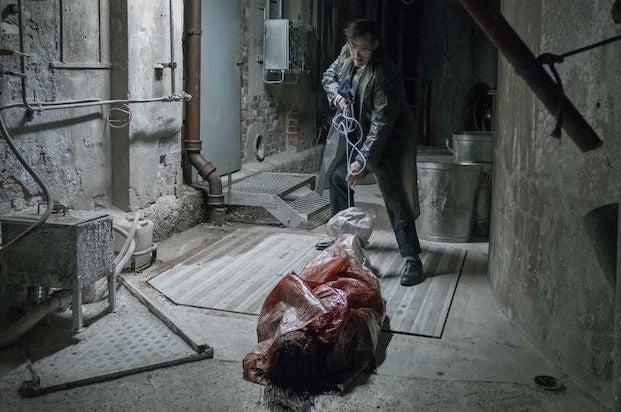 Of all the shocking things about Lars von Trier’s “The House That Jack Built,” the most shocking might have been this: At the film’s Tuesday-morning Cannes Film Festival press screening at the Grand Theatre Lumiere, hardly anybody booed.

This has been a surprisingly boo-free Cannes, but von Trier seemed to be a lock to get a theater full of derision from the notably cantankerous press corps. And when you see the reports that 100 people walked out of the Monday night premiere, from which the vast majority of press were excluded, it came as a real surprise that the end of the long, violent, gleefully transgressive film was met with polite applause and only the smallest sprinkling of naysayers.

But the reaction fit the film — because in between various killings and vivisections, “The House That Jack Built” is kind of a bore. As much as von Trier loves to push our buttons with graphic imagery, he also wants to get under our skin by talking, talking, talking.

And while the gore got the headlines, the talk is what sinks the movie.

The Danish provocateur has been pushing moviegoers’ buttons for years now, and to all appearances delighting in the outrage he’s inspired. And if the Cannes Film Festival is finally going to let him back in the door after declaring him persona non grata for press-conference comments about Adolf Hitler in 2011, why wouldn’t he come back with a film designed to abuse that hospitality?

“The House That Jack Built” is that film. A serial-killer howdunnit replete with graphic depictions of the killings and mutilations of men, women and children, it is a repulsive thing to watch, perhaps made even more repulsive by the fact that you know your feelings of disgust are pretty much what von Trier wants you to feel.

And he’s pretty clearly sending a message to Cannes, too, if the occasional talk of Hitler and the Nazis and the presence of Bruno Ganz (who played Hitler in “Downfall,” the source of hundreds of YouTube knockoff videos) is any indication. TheWrap’s Ben Croll called the movie “the biggest mic drop in history,” and he’s got a point.

A game Matt Dillon stars as Jack, an aspiring architect in Washington state who launches a sideline as a sadistic butcher when a woman (Uma Thurman) is mean to him after she flags him down to help her fix a broken jack.

(Or does he stop because he’s already looking for an excuse to bash somebody’s head in? I don’t know, and I don’t think von Trier cares. If something can be blamed on a woman, the character and the movie tend to go that route.)

Most of the attention has gone to the salacious depiction of half a dozen of Jack’s murders, which are particularly gruesome when they involve women and those closest to Jack. He kills his girlfriend’s two young sons before dispatching her, and later kills another girlfriend (Riley Keough) after torturing her by cutting off her breasts.

Yes, we see it, and yes, people walked out of the press screening, though fewer than had done so at the premiere.

The biggest problem with the film, though, is that beyond all the ickiness and torture-porn grandstanding, von Trier has created something as cold as Jack’s victims and as ugly as what happens to them.

Jack spends most of the movie trying to justify his savagery as art in endless conversations with Ganz, who plays a mystery man named Verge who might not be the devil but probably has Satan on speed dial. Jack invokes Gothic architecture, classic paintings and Glenn Gould’s music in rambling monologues, and mimics Bob Dylan in a series of riffs on Dylan’s “Subterranean Homesick Blues” video.

Verge isn’t buying his rationalizations or excusing his vicious misogyny (“why do men get blamed for everything?” Jack says before taking a knife to Keough’s character), and we don’t either. Jack is just stalling for time, really, and so is von Trier, with distractions like a lecture on how the different ways of making dessert wine compare to the decomposition of a dead body.

He keeps throwing out stuff clearly designed to get a rise out of us — Nazi concentration camps are always good for a gasp, right? — but the character and the director are pretty much doing the same thing: Showing us a portrait of depravity and asking us to believe it’s art.

The crazy thing is that von Trier is still a skilled filmmaker, and a little restraint might actually have made a challenging, disturbing but involving movie out of this material. “Melancholia,” the last film of his to play Cannes, had a demented majesty to it, while his 1996 debut “Breaking the Waves” was flat-out brilliant.

“The House That Jack Built,” on the other hand, seems to be the work of an artist who at the moment doesn’t aspire to do anything other than provoke. The people who walked out during the film might say he succeeded — but c’mon, if you can’t even get the Cannes press corps to boo you, how provocative are you, really?