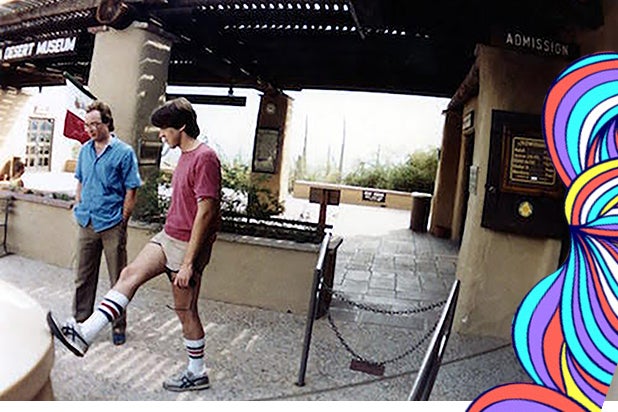 Steve Pond and Cameron Crowe in Tucson, Arizona in 1982 / Photo by Robert Lloyd

I don’t remember exactly when I met Cameron Crowe, but I know it was sometime in the 1970s. I was a 19-year-old rock critic writing for the Los Angeles Times, which might have been a big deal except that Cameron was a 17-year-old writing for Rolling Stone. If one were to grade by the curve, I suppose I was a slacker.

But when people who aren’t of a certain age find out about my rock ‘n’ roll past, the standard response is, “Oh, ‘Almost Famous?'” And my reply is always the same: “No, I’m almost ‘Almost Famous.'”

By arriving a couple of years later and a couple of years older than Cameron, I missed much of the era depicted in the movie — by the time I was going on the road with rock bands for Rolling Stone, things weren’t as freewheeling and my stories just weren’t as good as his.

But I did have a hand in the genesis of the movie that won Cameron an Academy Award for screenwriting and has now been turned into a stage musical that opens at San Diego’s Old Globe theater on Friday. More specifically, I had a hand in the genesis of an article that Cameron wrote that inspired him to start work on the screenplay that would become “Almost Famous,” and that is now being published for the first time by TheWrap.

It happened in 1996, when I had a contract to write and occasionally edit for a Ticketmaster magazine called Live! The magazine was devoted to live performances — concerts, theater, sports, pretty much anything you could buy a ticket for — and one of its regular features was a column called “Performance Past,” in which some notable person would write a first-person account of a live event that had a particular impact on them.

Contributors included musician Robyn Hitchcock writing about Captain Beefheart, author Stanley Booth rhapsodizing about Otis Redding and sportswriter Dick Schaap describing Game 7 of the 1961 World Series. I figured Cameron Crowe would be perfect for the column, so I reached out to him and asked if he’d like to pick one of the thousands of concerts he’d been to and give us 750 words about it.

He said yes immediately, adding that he wanted to write about the first concert he’d ever attended: Elvis Presley at the San Diego Sports Arena, which he went to with his mother when he was 12. A couple of weeks later, I got the piece, which was about a lot more than just Elvis. It was also the story of Cameron’s battles with his parents, specifically his mom, about whether rock ‘n’ roll was the poetry of Cameron’s generation or, as his mother insisted, “the poetry of drugs and promiscuous sex.”

Also Read: Cameron Crowe on 'Roadies': Why Music Fans Need to Put Down Their Phones

The piece was great, but Cameron had left the 750-word limit in the dust long before he even got to the Elvis concert. Instead, he turned in about 3,000 words, far too long for the front-of-the-book slot occupied by Performance Past.

We talked about turning it into a feature, but in the end the verdict came down: We were willing to expand Performance Past by a page or two, but the piece would have to be cut to fit even in the new, expanded spot.

Cameron politely but firmly said that if the piece was going to be cut, he’d rather it didn’t run. And he insisted that if we didn’t run it, that was fine with him. Writing about his relationship with his mother and with rock ‘n’ roll had given him an idea for a screenplay he wanted to write.

That screenplay, of course, turned out to be “Almost Famous,” which has nothing to do with Elvis, but a lot to do with his mom, Alice (a fictionalized version of whom would be played by Frances McDormand in the movie), and with the love he developed for music. I’m sure he must have thought about turning his own experiences as a young rock journalist into a screenplay before he wrote the piece for Live!, but I like to think that the magazine assignment at least nudged him in the right direction.

Within a couple of years, Live! folded as Ticketmaster got out of the magazine business. But that original piece managed to migrate from floppy disk to ZIP drive to my hard drive. And as the date neared for the “Almost Famous” stage musical to begin a San Diego run and, presumably, a trip to Broadway, I dug it up again, reread it and wondered if it was time to dust it off and actually publish it.

So I emailed Cameron and asked if he’d be interested in TheWrap running that original piece. His response came back quickly: “Hell yeah!!”

So we get to read Cameron Crowe on Elvis, his mom, his sister, Eric Clapton and lots of other stuff. It’s an early step on the road to “Almost Famous.”