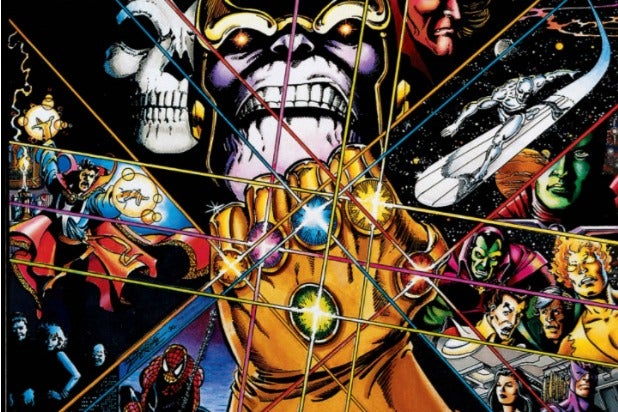 (MAJOR SPOILERS AHEAD for the ending of “Avengers: Infinity War.” So if you don’t know how it ends and don’t want to know, leave now.)

“Avengers: Infinity War” finally brings Thanos, the shadowy villain who’s been waiting in the wings of the Marvel Cinematic Universe, to the forefront to wreak some serious havoc. He works to gather all the all-powerful Infinity Stones, with the plan of wiping out half the universe to bring it balance: Basically, Thanos considers himself a cosmic gardner, and he needs to prune everything back a little so the whole garden doesn’t get overgrown and run out of resources.

In the end, Thanos is successful: He gets all six Infinity Stones, puts them in the Infinity Gauntlet, snaps his fingers, and causes half the life in the universe to basically turn to dust. That includes a number of Avengers and other heroes, like most of the Guardians of the Galaxy, Spider-Man, Black Panther, and Doctor Strange. They’re all gone.

Of course, this is a comic book movie, and superhero stories are not usually such mega-downers. Fans all over the world are thinking to themselves, “Okay, how are the Avengers going to get out of this one?”

We can look to the comics for some potential hints, of how this will play out. Much of “Infinity War” is very loosely adapted from “Infinity Gauntlet,” a six-issue “Avengers” run (with a bunch of tie-ins) from 1991 that starts with Thanos using the Gauntlet to wipe out half the universe, and the surviving heroes banding together (with a lot of them dying) in order to try to reverse the damage. We should stress again that this is a very loose adaptation — it’s not incredibly likely that “Avengers 4” will play out the way the “Infinity Gauntlet” story did. But it’s fun to talk about anyway, and there is one specific detail from the book that is definitely in play.

“The Infinity Gauntlet” doesn’t concern Thanos getting hold of the stones — he already has them. Instead, it’s all aftermath, with the battle against Thanos finding him wielding the Gauntlet and using it to kick the hell out of the Avengers and their buds. He pretty much murders all of them, including Tony Stark and Captain America. In the end, though, Thanos isn’t beaten in a straight fight, but outsmarted — kind of.

After achieving his goals and wiping out his enemies, Thanos achieves a cosmic, higher plane of existence, becoming a sort of ethereal, astral version of himself with all his power. But that temporarily leaves his body unprotected, and that’s when Nebula makes her move. In the comics, Nebula is Thanos’ granddaughter instead of his daughter, but she hates him and is pretty tortured all the same. She snags the gauntlet off Thanos’ unprotected body while his spirit is away, and becomes all-powerful herself. And she uses the Gauntlet to turn back time 24 hours, to before Thanos killed half of everyone.

That’s the particular item that is still in play for “Avengers 4,” since Nebula is one of the few main characters who survived Thanos’ purge.

Before deciding to kill half of everyone in the universe, Thanos tortured Nebula, leaving her in a burned-up state between life and death. This (and later killing half of everyone) was all to impress Mistress Death, a cosmic but physical representation of death, that Thanos was in love with. When Nebula grabs the Infinity Gauntlet off Thanos, she uses the Gauntlet to turn back time she also restores herself to her original form. But Nebula is a villain, and the surviving heroes can’t leave her in control of the entire universe. So they enlist Thanos’ help.

Doctor Strange rescues Thanos at the request of Adam Warlock, a super-powerful character tied to the Soul Stone, and who hangs out in the stone’s weird, interior Soul World. He spends most of “The Infinity Gauntlet” watching what’s up and biding his time for this chance to talk to Thanos and convince him to stop being such a jerk. Warlock manages to get Thanos to abandon his mad, murdery ways.

Doctor Strange, Warlock and Thanos go back to Nebula, where Thanos uses reverse psychology to get Nebula to use the Gauntlet’s power reset everything to the way it was 24 hours earlier. That undoes all the deaths Thanos was responsible for, both from the finger-snap and from the subsequent battle — and it also turns Nebula back into that weird, tortured monster that Thanos had turned her into. Nebula battles back various people’s attempts to get the Gauntlet, but Adam Warlock jumps back into the Soul World and uses his connection with the Soul Stone to create discord with the other stones. It causes the Gauntlet to hurt Nebula, so she takes it off, allowing Warlock to grab it and resolving the battle. Adam Warlock takes control of the Gauntlet, Thanos gets away by blowing up a nuke on his belt, and Nebula is tried for her crimes as a space pirate. Oh, and Warlock sends the Avengers and everyone else back to Earth, no harm done, apparently.

The whole thing wraps up with Thanos surviving the ordeal, but having learned something about himself. Warlock finds him a couple months in the future, living a quiet life as a farmer. He promises not to do any more evil. Meanwhile, Adam Warlock is eventually convinced that he also can’t wield the full power of the Infinity Gauntlet, and spreads out the stones to various individuals he thinks are best suited to protect them.

Of course, there are some major differences between “Avengers: Infinity War” and “The Infinity Gauntlet,” but a lot of the broad strokes remain. Doctor Strange definitely spent “Infinity War” putting events into motion that would potentially lead to victory — “We’re in the endgame now,” he told Tony Stark after turning over the Time Stone (which he explicitly said he would not do). Nebula was among the survivors, having shown up at the last minute in an attempt to kill Thanos. And the Soul World is playing some kind of role: We saw Thanos briefly zap into the strange orange realm to speak with a young version of Gamora immediately after that fateful finger-snap.

Also Read: 'Avengers: Infinity War' -- We Need to Talk About What Happened With Vision

The differences are pretty massive, though. Doctor Strange is one of the key players in “Infinity Gauntlet,” but he’s among the dead at the end of “Infinity War.” Adam Warlock, meanwhile, is not a character in the Marvel Cinematic Universe at all — at least not yet — and he’s basically the main character of the story. The Silver Surfer, another major player, is currently stuck with Fox along with the Fantastic Four until after the Disney buyout fully goes through years from now.

Also, while Nebula will no doubt be very important in “Avengers 4” given her close relationship with Thanos, that movie is going to pull away from the “trick idiot Nebula” resolution of the story to go with something a little more final and satisfying. It’ll likely involve also involve Tony Stark, since saving Tony’s life seemed to be something Doctor Strange did very deliberately. (For more on what Doctor Strange saw in the future, check out our deep dive.)

And while Adam Warlock isn’t around — he was teased at the end of “Guardians of the Galaxy Vol. 2,” but Marvel boss Kevin Feige has said he won’t be showing up until at least the third “Guardians” movie in 2020 — it might be Carol Danvers, AKA Captain Marvel, who stands in for that role. It was her logo on Nick Fury’s pager in the post-credits scene. Check out our examination of how Captain Marvel might factor into the story.

So some of the elements from “The Infinity Gauntlet” might still be in play in “Avengers 4,” and of course, there’s a big chance that many people will be un-evaporated through the power of the Gauntlet. In the MCU, though, even though some people come back from the dead, consequences often still linger. We can expect that, while Thanos might be totally victorious in “Avengers 4,” the ending won’t be completely happy, either.

Wondering what else there is to know after the huge changes to the MCU brought about by “Infinity War”? We’ve got you covered with deep dives into what the hell happened, what it means, and what’s next:

Click here for our deeper look into how “Captain Marvel” might impact this distressing plot twist. Click here for a closer examination of Doctor Strange’s actions in “Infinity War,” and how losing this fight might end up being the key to winning it later. Click here for our discussion of the whole Vision situation and whether he’s really dead.