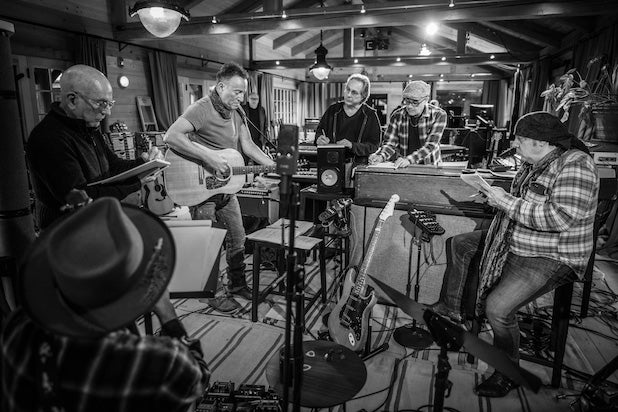 Director Thom Zimny has become Bruce Springsteen’s historian of sorts at a time when the veteran rocker is increasingly willing to engage with his own history. In a string of films beginning with “The Promise” in 2010 and more recently including “Western Stars,” the filmed version of “Springsteen on Broadway” and now the new documentary “Bruce Springsteen’s Letter to You,” Zimny has showcased both Springsteen’s performances and his ruminations on his life and career.

“Letter to You,” which will premiere on Friday on Apple TV+ to coincide with the release of the album of the same name, marks the first time that Zimny took his cameras into the recording studio with Springsteen, who made the album in four days last fall with the musicians in his E Street Band. Spurred in part by the death of George Theis, who recruited a teenage Springsteen into his first band, the Castiles, it is a work that looks back through songs like “Last Man Standing” and “I’ll See You in My Dreams,” but also embraces the past by having the E Street Band record his unreleased, impossibly wordy early-1970s compositions “Song for Orphans” and “If I Was the Priest,” as well as the mid-’70s rocker “Janey Needs a Shooter.”

If the “Letter to You” album is an energetic return to the E Street sound, the “Letter to You” movie is both a celebration of its creation and a meditation on aging and mortality. It mixes footage from the recording sessions at the studio on Springsteen’s property in New Jersey with the artist’s musings on the album’s themes; the result is both a bracing rock ‘n’ roll movie and a thoughtful and touching reverie.

Also Read: Bruce Springsteen Documentary 'Letter to You' to Debut on Apple TV+ This Month

TheWrap spoke to Zimny, who started as an editor on television shows like “The Wire” and has recently directed documentaries on Elvis Presley and Johnny Cash, about the latest of his many collaborations with Springsteen.

As a longtime Springsteen fan, I found it quite moving to not only see Bruce dealing with issues like mortality in the new songs, but also bringing out those old songs that he’d never recorded with the E Street Band.
Yeah. When we made the film, Bruce was bringing new material to the sessions every day, and it was just fabulous to watch the E Street Band with that material. But there was this one day where he said, “I’m going to bring out some songs that we did in the ’70s.” They were songs that I had known as a fan from scratchy bootleg records. And in that moment, I got to film and witness the E Street Band go to a place that I never thought I’d see. Those performance are one of my favorite things that I got to film.

When you’re a filmmaker, you dream up moments. And “Letter to You” was something that as a 16-year-old fan, I would never let myself dream that big.

You’ve obviously worked with archival footage of Bruce and the E Street Band in the studio in some of your other films. But this was the first time that you were actually in there filming them, wasn’t it?
This was the first time that Bruce let a filmmaker come into the studio with full access from the very beginning to the very end of the sessions. There were no limitations put on us – we just had to keep out of the way. And in that five days of filming, we were able to capture a lot of these really tiny, invisible, private moments of creating. And in that you see the relationship that in many ways I saw glimpses of in the archival footage.

When I worked on other documentaries, I would see old footage of Bruce and the band, and the surreal thing in filming them now is how close they are and how so many of the gestures are the same. The visuals of Bruce and (guitarist) Steven Van Zandt behind a mixing board, or (manager) Jon Landau talking to Bruce. That brotherhood comes across visually many times in the archival footage, but also in filming them now.

How did you capture everything but also stay out of the way of a bunch of musicians at work?
I had three cameras and three cameramen roaming around. I knew I didn’t want a big footprint, so I had cameramen who had worked with me in the past – my cinematographer, Joe DeSalvo, and two other operators – and one remote camera that picked up a few shots here and there. Really, it was three guys dressed in black hanging out in the corners and out of sight lines, trying to get everything that we could. They were able to hear me because I was monitoring their cameras in the room next door to the studio.

The key thing for me was nothing was going to be made for the cameras. No one was going to act for the cameras. I wanted to chase the creativity and the process of Bruce and the band recording. And to do that, you have to be going at all times and catch that magic. None of the crew could interfere in any way with the vibe of the space.

Did Bruce’s narration come afterwards? Did you assemble something and then he wrote to that?
I started to assemble a few songs, and then the COVID virus hit and I shut down my production offices, took my editing system and set it up in my Brooklyn apartment. Bruce and I would FaceTime every day. I would send him a version of a song, and he’d write back an explanation of a theme or of the song’s lyrics, expanding on the idea of what the song was about. That’s a structure that we started with “Western Stars,” but with this one we went even deeper in the writing.

Then he’d send me a voiceover, and I would cut around the clock, building the verité scenes and building things I shot of landscapes with drone photography.

The film is built around full song performances, but in most cases they’re not just playing the song straight through in the studio. We might start with them first learning the song, then go into the recording itself, and maybe see them listening to playback at the end.
The idea was to break up the film with verité footage of the band creating in the studio, and then also moments of playback or moments of Bruce producing the song. That was really to convey the full process: how the band is introduced to the song, how the band attacks the song, some of the chaos that goes on in the studio and more importantly, the outcome.

They recorded most of the songs just in four days. So in three hours time, you would watch something unfold. It started with Bruce and a notebook. He opens up the notebook, there’s new song. The guys take a few notes on legal pads, and then you’re in it, and what unfolds is a brand new E Street Band song.

I also wanted to make sure that I got some of the smaller moments of creativity that I was witnessing in the edit, and to play with the style of cutting. It goes from these tone pieces to more pure doc moments in the studio.

There’s a sequence toward the end of the film where “One Minute You’re Here” goes into “I’ll See You in My Dreams,” which really plays up the theme of mortality. That theme is in the album, but it’s even more pointed when you place those two songs back to back rather than putting one at the beginning and one at the end, the way they are on the album.
I wanted the film I wanted to stand on its own and not completely mimic the structure of the record. They’re really two different things. And I’m really happy with Bruce because he looks at these films as their own pieces. It’s more like, “What’s the story of the film? What’s its intent? What’s it telling?” The theme of mortality is really strong in this new material, but also there was a sense of light and a sense of spirituality that I was chasing.

I was quite obsessed with Bruce’s studio and its beauty in the morning light, and also the presence of the E Street history all throughout that studio. So there was a bigger undertaking of “What does this mean at this moment to be in the studio with these guys?”

The sequence where everybody’s listening to the playback of “I’ll See You in My Dreams” is very powerful, with Jon Landau listening to this song about death and almost breaking down at the mixing board.
That was one of my favorite moments. It just captures the beauty of Jon and Bruce’s relationship. It’s a spontaneous moment of emotion that really works to capture their commitment and growth together as friends and collaborators. I found that in the edit early on, and I just knew I had to build around this pivotal moment. There are so many themes and feelings within this music that to see Jon Landau have that emotional break during the playback works on so many levels. It was a pure moment of connecting to the music, but also an acknowledgement and a nod to these men, Bruce and Jon and the band, who have been such an influence to me.

Over the last few years, you’ve been around Bruce when he’s done a lot of work that looks back, starting with the book and “Springsteen on Broadway” and including this album. In that time, your films have been snapshots of moments. But is there a bigger biographical movie about Bruce to be done at some point?
There’s no talk that I’m aware of a biographical film. I can’t speak for Bruce, but what he’s demonstrated to me in the last few years is a man who’s really not settling on just looking at the past. The book, the Broadway play, “Western Stars” are the work of a man fully engaged and connected to creating. So the films that we’ve been making have been companion pieces to those. And I don’t expect him to stop at this point to fully take on a life story that way. I feel like a big part of it was done in the book and the Broadway show, but I don’t see him as a film. I see him so busy with other work right now.