This story originally appeared in the Nominations/SAG/Globes issue of TheWrap’s Oscar magazine.

It took some persuading before Sylvester Stallone agreed to hand the reins to his Rocky franchise to a 29-year-old African-American director, Ryan Coogler, who didn’t even have one film under his belt when he first approached Stallone. But Coogler, who was about to make the acclaimed 2013 indie “Fruitvale Station,” about a young, unarmed black man gunned down by a transit cop in Oakland, eventually won over Stallone.

And then he made “Creed,” which rebooted the franchise in a fresh and exciting way, reinforced Michael B. Jordan‘s stardom in a powerful role as the son of longtime Rocky nemesis Apollo Creed, and brought Stallone his best reviews ever as the aging and ailing boxer-turned-trainer, almost 40 years after he was nominated for two Oscars for the original film.

You started trying to get “Creed” off the ground before you even made “Fruitvale Station,” didn’t you?
Ryan Coogler: I had the idea of it, yeah, around the time that “Fruitvale” was starting. That was when my father got sick. I’m very close with my father, and he’s a big Rocky fan. I kind of inherited Rocky fandom from him, you know, and those movies have a lot of meaning to me. They represented my father to me. So when my dad got sick and his muscles were atrophying and we thought we were gonna lose him, I had an emotional crisis.

And out of that came this idea of, what if this happened to my father’s hero? And what if there was a young guy in his life, and we were following their relationship? I was questioning masculinity. Is your manhood defined by your strength and your ability to protect all you love? I was watching my father, who was the best man I knew, losing those things. And that was around the time I was working on “Fruitvale,” and a lot of it was guilt ’cause I couldn’t be around my dad as much as I wanted to be.

What was it like showing him “Creed” for the first time?
It was emotional, man. You know, these are the only movies where I would see my dad cry watching them. And there’s so much of me and him in the movie.

For instance,when my dad was sick, he had trouble walking, but he had too much pride to use a cane. He would have me and my younger brothers walk in front of him, and he’d put his hand on our shoulders and lean on us. So in a lot of scenes when Rocky comes out of chemo, that’s how he walks with Adonis. For my dad watching that scene with me and my brothers and my family, it’s got a little extra.

Also Read: All 7 Rocky Movies Ranked, From the Original to 'Creed' (Photos)

So here you are, on the set directing Sylvester Stallone as he plays a character he created before you were born. Do you have the nerve to give him notes?
Well, I have to. I knew from the moment I met him that he was a crazy talented actor, and my deal with him was, “Sly, when you’re normally making movies, you wrote it, you’re acting, producing, directing. In this situation, I’m gonna take all this other stuff off your shoulders and you can act.” He was still a producer, and he was there for support when he saw something in the script or something in a fight scene that could be better. But I wanted him to put all the talent and experience and charisma into his performance — and man, he did it. He’s so eager, he’ll do 100 takes if there’s 100 ways to make a scene better. And then throw in the fact that this dude was 68, you know what I mean? He had no reason to be doing this. He doesn’t need the money, he doesn’t need this addition to his body of work. 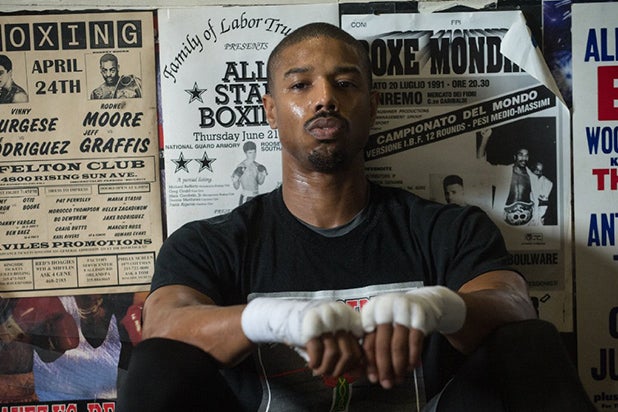 Michael B. Jordan as Adonis Creed

The central character isn’t Rocky — it’s Adonis Creed, the son of the bad guy in the first movie.

It’s interesting — as a black man growing up, Apollo was never the villain. For me, Apollo was awesome even when he was purely structurally an antagonist in the first Rocky. From the moment Carl Weathers steps onscreen as Apollo Creed in “Rocky,” I thought, “This guy is awesome.” He’s like Muhammad Ali, who was like a god to black culture and to black athletes. He was articulate, he had a business head and he was surrounded by other black people, unapologetically. I found the character to be revolutionary in many ways, and that was a perspective that I didn’t want to get away from in making this.

Does it feel significant that you were able to take a franchise built around a white hero and put a young black man at its center?
Does it feel significant to me? Oh, wow! How could it not? It’s exciting, man, for so many reasons. To be able to give not just black folks but America, to give them Apollo back in this version is incredibly exciting. And to have Sly’s blessing and [producer] Irwin [Winkler]’s blessing, and to be able to work with actors as outlandishly gifted as Mike–to be able to do that, man, it’s profound.

Since you made “Fruitvale Station,” the incident that led you to make that film has been repeated.

Do you feel like there’s been any progress since then?
No. No. I don’t. I think there’s progress in people’s willingness to record those situations when they see them unfolding. But as far as these situations stopping? Nah.

So what’s it going to take?
I wish I had that answer. Systemic change, I think, because it’s a systemic problem. And hey, I think art can help too. Art can do its part. Having a more diverse perspective means more three-dimensional characters that look like these kids that are getting murdered. I think that’s what our industry can do.