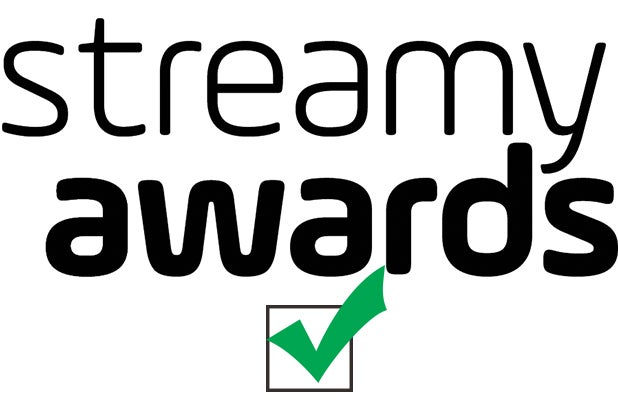 The 6th Streamy Awards take place tonight, October 4, at the Beverly Hilton in Beverly Hills. It’s the same room as the Golden Globes, with the same accountants tabulating votes.

Streaming stars like Cameron Dallas, Lilly Singh, Roman Atwood, Miranda Sings, and Casey Neistat are up for awards, but it’s understandable if you aren’t totally clear on who decides the winners. There are a lot of award ceremonies out there.

Here’s a short explainer about the Streamys, and why you won’t see James Corden‘s “Carpool Karaoke” up for any awards.

The Streamys are just an online popularity contest with kids turbo-voting their favorite bedroom-vloggers, right?

The Streamys are almost entirely a professional peer-voted awards show of merit, like the Grammys, Emmys, and Oscars.

In total, 42 of the 44 Streamy categories are decided by a Blue Ribbon Panel (this is its actual name) of approximately 500 creators, executives, and other experts in the online video industry.

“It is a recognition amongst peers,” Streamys co-creator Drew Baldwin told TheWrap. “That is where the relevancy and the credibility comes for the Streamy Awards.”

The audience votes for two-high profile awards: “Entertainer of the Year” and “Show of the Year”. The Blue Ribbon Panel selects 10 nominees who campaign publicly and on social media. They include household names like Rhett and Link’s “Good Mythical Morning,” Miranda Sings, The Young Turks, and Philip DeFranco.

The audience also has a say in another way, which we’ll describe below.

Who is on this mysterious Blue Ribbon Panel?

Producers are tight-lipped. They do not publish or share the names of the panel. But we do know this:

In addition to his other duties, Baldwin is a voter. New Form Digital CCO Kathleen Grace is on the panel. Writer and digital strategist David Bloom is a veteran voter as well.

They are buyers, bosses, and bigshots of the digital video industry.

Are there “super-delegates” or “super-voters” whose votes or voices count more?

No. Show boss Drew Baldwin’s vote counts just as much (or as little) as those of the other 499 voters.

Does the Blue Ribbon Panel just nominate as many big names as possible to stack the room?

One of the five nominees in each category is fan-determined. Fan-nominated creators must have also submitted themselves for awards consideration to avoid any unwitting write-in campaigns.

Do the Blue Ribbon Panel folks get together in a room to screen nominees, debate, and horse trade to ensure a diverse and representative body of winners to please the audience and the industry?

Nope. All voting is electronic. The organizers run a secure members-only viewing portal where panelists log-in to review and vote on nominees.

How can newcomers gain traction with an insular voting body of video professionals heavily tilted towards the Los Angeles professional community and their personal and professional entanglements?

The “fan nominee” in each category keeps the door open. It is not designated as the “fan nominee” when presented to the BRP for final voting, and sits alongside the other four nominees as an equal.

Multiple voters told TheWrap that a fan-nominee has gone on to win in past years.

“During the voting process, I do my best to look up any unfamiliar names or titles,” Grace told TheWrap.

“There have been instances where someone relatively unknown to the professional community just skyrockets to the forefront,” Baldwin said. “They end up coming home with the hardware because they are truly excellent.”

How much campaigning goes on?

“I haven’t really been subject to lobbying,” one four-year member of the panel told TheWrap.

“I think in part that’s because the awards are so much newer, the potential population of participants so much broader, and the relative sophistication of potential honorees,” Bloom said.

How does voting work for those two fan-voted “Audience Choice” categories?

Individual fans can cast up to 200 votes per day in each of the two Audience Choice awards. Voting took place at the Streamys website and on Twitter over the past two weeks, allowing nominees to run social media campaigns.

I loved James Corden‘s “Carpool Karaoke” and all of Jimmy Kimmel’s skits. Why aren’t they nominated here?

Anything that airs on TV before being shared online is not eligible.

If I’m a nominee and don’t even know who is on the 500-member Blue Ribbon Panel, how can I campaign?

There have been some “For Your Consideration” campaigns, and some have taken out ads in trade publications.

“You do not see these huge FYC campaigns and screeners targeted to academy voters,” Grace said. “Rather [you see] online activations on Twitter and Instagram for fans and people in the space.”

Does anyone know the results ahead of the show?

“We don’t have someone show up with a handcuff and briefcase, but the awards are kept sealed until they are revealed live on stage,” Baldwin said.

Do Streamys execs and voters get a look at the final vote after the results to glean insights?

Producers don’t have access to the vote count and do not mine the data for insights on relative digital star popularity or voter participation rate.

If you win a Streamy, do you automatically get the promotion to “Blue Ribbon Panel” member?

Selected past winners are invited to join the panel.

I think I am an online video industry expert. How do I become a voter in the future?

There is an open application process.

“We ask the Blue Ribbon Panelists to submit their credentials and make a case to vote,” Baldwin said.

Being on the panel is not a lifetime thing.