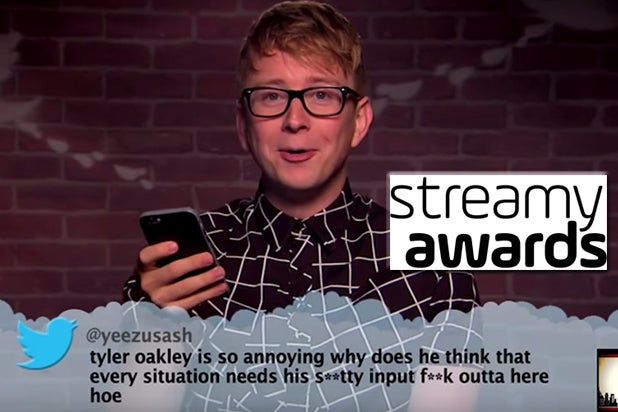 The best of online video was honored Saturday night at the Streamy Awards annual Nominee Reception, where 30 trophies were handed out in the first of two events.

Among those who took home a trophy were major media brands like Buzzfeed (“The Try Guys“), digital-first productions from legacy media brands (Jimmy Kimmel’s “Mean Tweets — Creator Edition” and ESPN’s “30 for 30 Shorts“) and digital natives like singer/performer Todrick Hall (Breakthrough Artist), Lindsey Stirling (for the violin player’s Christmas cover of “Hallelujah” in an NYC subway), Grace Helbig (for her brand campaign with AT&T) and prankster Roman Atwood.

Despite Buzzfeed’s online heft, “The Try Guys” win in the Non-Fiction category was a notable upset. The non-bro man-band known for trying things like “Going Bald” and “Which Type of Alcohol F—s You Up the Most?” came out on top of a field that included king of YouTube PewdiePie, the Fine Brothers’ “Do They Know It,” AT&T’s “The Hills”-esque glossy serialized reality series “@SummerBreak” and the aforementioned “MatPat.”

King Bach will host the festivities, where 14 marquee awards will be given out in categories like Snapchat Storyteller, Best Viner, Live, Beauty, Breakout Creator, Fashion, First Person and two fan-voted categories, “Entertainer of the Year” and “Show of the Year.”

A blue ribbon panel of 500 digital video industry veterans, experts, and creators vote for the winners.

Check out the full list of Saturday’s winners below:

AWARDS FOR CHANNELS, SERIES OR SHOWS

DRAMA – I Ship It

DOCUMENTARY OR INVESTIGATIVE – The Banker Suicides

HEALTH AND WELLNESS - Yoga With Adriene